Seeking to reduce its huge dependence on Israel, Palestine is set to establish its first waste-to-energy power project. 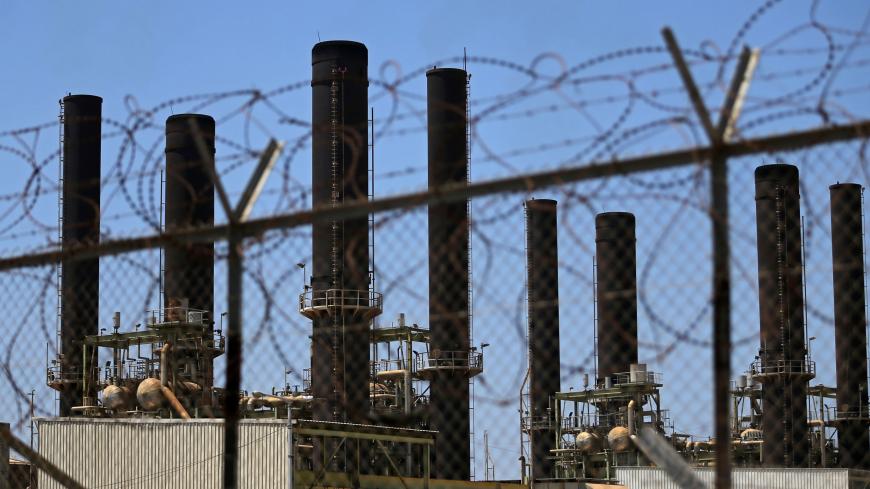 A view of the Gaza power plant in the central Gaza Strip, June 23, 2019. - REUTERS/Ibraheem Abu Mustafa

GAZA CITY, Gaza Strip — Palestine is seeking to put landfills to good use by developing sustainable energy sources to become more self-sufficient and help limit its power reliance on Israel. It plans to increase its locally produced energy through its first waste-to-energy project.

The Palestinian government is taking the first steps toward the establishment of a project aimed at generating electricity from the gas produced from decomposing biomass at the Zahrat al-Finjan (ZF) landfill in the Jenin governorate, which is considered the main landfill in the northern West Bank.

Back in October 2018, the Palestinian Energy Authority, the Palestine Investment Fund and the ZF landfill services council in Jenin signed a memorandum of understanding for the feasibility study of this project.

The Palestinian government decided during its weekly session June 25 to set a budget for the rehabilitation and maintenance of the landfill in a bid to create an appropriate work environment in partnership with the private sector for the generation of biogas and the production of electricity.

The ZF landfill is the first Palestinian sanitary landfill to be designed in accordance with international standards. It began operating in 2007 and was expected to serve the two governorates of Jenin and Tubas until 2042 with a daily capacity of 300 tons. It was built over an area of 220 dunums (54 acres) and financed at a cost of $9 million by the World Bank and the European Union's contribution to the necessary equipment. It replaced 86 randomly distributed landfills in northern West Bank that were stretched over an area of 1,200 dunums (296 acres).

According to a joint statement issued by the Palestinian Central Bureau of Statistics and the Ministry of Environmental Affairs on the occasion of World Environment Day on June 5, 2018, more than 50% of Palestinian waste is organic.

The Palestinian Authority (PA) seeks to find alternatives to Israel, which is the main supplier of electricity in the West Bank by 90%. Palestinians also rely on a Jordanian power line and solar energy for the remaining 10%.

Director General of the Ministry of Local Government in the Jenin governorate Ragheb Abu Diak told Al-Monitor, “This is Palestine's first investment in the energy field and in strengthening sources of energy.”

Hani Shawahneh, the executive director of the ZF landfill, said generating electricity from biogas would reduce the negative impact of organic waste on the environment. This gas, which is produced from decomposing biomass, is considered the second most dangerous gas contributing to global warming.

“The project will be carried out through Palestinian funding at a cost of $9 million and will produce about five megawatts (MW) of electricity — enough to meet the needs of about 30 Palestinian villages located within the Jenin governorate,” Shawahneh told Al-Monitor.

Shawahneh said the project includes the establishment of several facilities, including facilities to accelerate the decomposition of biomass in the landfill to produce the gas, known as anaerobic digestion, and the drilling of wells in the vicinity of the landfill where the biogas would be stored.

“The gas would be later transferred from the wells through underground pipelines to generators equipped with a steam system to generate electricity,” he said.

He said the government chose the ZF landfill because it's the largest landfill in the West Bank and operates in accordance with international standards. The landfill floor consists of three layers: nylon, gravel and cement to prevent leakage to the groundwater.

“Producing clean power from biomass or solar energy is necessary to meet the growth of electricity demand in the West Bank, which increases by 3.5% annually. This is also necessary to help limit power reliance on Israel,” Amjad el-Qanni, a researcher and lecturer in the department of engineering, energy and environment at An-Najah National University, told Al-Monitor.

For Shawahneh, the ZF landfill waste-to-energy project is at the basis of a larger future project to produce energy from waste from the entire northern West Bank, which amounts to 1.5 million tons of organic waste annually. This could produce about 30 MW of energy, enough to meet 3.3% of the population’s electricity need, which amounts to 900 MW.

“Although the amount of energy generated from biomass is not large enough to meet the electricity needs in the West Bank, the main objective of this project is to rid the environment of the risks of these wastes and the produced gases. Also, after extracting the gas, the remainder of waste could be used as biofertilizers,” Qanni said.

This project, however, is not the first attempt at producing biogas in Palestine. In 2012, the Palestine Wildlife Society nongovernmental organization launched a project funded by the EU to extract biogas from animal manure.

“The aim of the project was to reuse animal manure to reduce its negative impact on the environment and to generate biogas,” Imad al-Atrash, the organization director, told Al-Monitor.

Atrash explained that the project required the collection of animal manure from the Bedouin communities in the eastern mountainsides of Jerusalem, Bethlehem, Jericho and the Jordan Valley. He noted the produced biogas was given to these communities as an alternative for cooking gas to help ease their economic burdens.

“Our success in attempts to produce biogas from animal manure encouraged the EU in January 2014 to give us funding to build 75 new sites on the eastern mountainsides that are still working on biogas production from animal manure,” Atrash concluded.