Masdar's new facility in the Emirati city of Sharjah will burn garbage to produce electricity. Some observers believe the process is relatively harmful to the environment due to its carbon emissions, but others say it is a good way to reduce landfill waste. 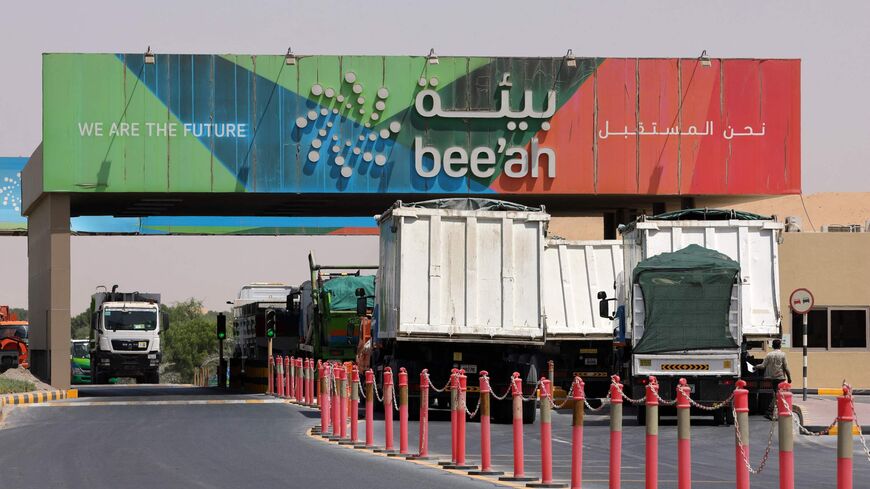 Trucks drive in and out of the Bee'ah waste management company in the Gulf emirate of Sharjah, on Sept. 2, 2021. The UAE, one of the world's top oil exporters, is building the Gulf region's first waste-to-power plants to ease its chronic trash problem and, at the same time, its reliance on gas-fueled electricity stations. - GIUSEPPE CACACE/AFP via Getty Images

An Emirati company unveiled a power plant today that will convert garbage into electricity.

Masdar said the waste-to-energy facility in the city of Sharjah is the first of its kind in the Middle East. The project will contribute to the United Arab Emirates’ Net Zero 2050 carbon emissions initiative, according to a press release.

“The use of this technology reduces waste and landfill use, creates valuable low-carbon energy and introduces a new sustainable industry to our region,” said UAE Minister of Industry and Advanced Technology and Masdar chairman Sultan Ahmed Al Jaber.

Masdar is a renewable energy company operated by the UAE sovereign wealth fund Mubadala. The power plant in Sharjah is the work of Emirates Waste to Energy, which is a joint venture between Masdar and Bee'ah — another sustainability-focused firm in the Emirates.

What is it? Waste-to-energy occurs when municipal solid waste, or garbage, is burned to produce steam, which is then made into electricity. It is most often produced via a massive incinerator, a boiler and a generator. In the United States, about 85% of garbage can be burned as fuel to make electricity, and the process thereby removes waste by a similar percentage, according to the US Energy Information Administration.

Masdar said its facility will convert 300,000 tons of waste from landfills yearly into 30 megawatts of electricity. This will be enough to power 28,000 homes in Sharjah annually, according to the company.

For comparison, in 2020, 65 power plants in the United States generated approximately 13.5 million megawatt hours of electricity from 25 million tons of garbage, according to the Energy Information Administration. New York City, with a population of more than 8 million, requires around 8,000 megawatts of power a day. Sharjah’s population is around 1.3 million.

Masdar said its waste-to-energy plant will be “low carbon,” which refers to energy that emits carbon below a certain threshold. This includes wind and solar power. Waste-to-energy often requires some carbon in the process of converting the waste to electricity.

Some environmental watchdogs believe waste-to-energy is not optimal. The Brussels-based nonprofit Zero Waste Europe said in 2020 that incinerators in Europe emit double the amount of carbon as European electric grids. They added that around half of the waste used in the process could be recycled or composted.

Masdar said in the press release that the plant will burn waste that cannot be recycled. They also follow European Union guidelines on good environmental practices, including on energy efficiency and water usage. To this end, the plant is next to a waste management facility that can handle the waste that cannot be burned. Masdar will also save the ash from the burning process to search for metals, among other practices.

Some entities believe waste-to-energy can be low-carbon. The Australian carbon-capturing company Global CCS Institute said in 2019 that waste-to-energy offered a “pathway” to lower carbon emissions. They said the process is particularly beneficial since it reduces landfill waste.

Why it matters: The new power plant is the latest example of the UAE investing in green technology and seeking to reduce its dependence on oil and natural gas. The power generated from the Sharjah plant will replace electricity from gas, according to Masdar. Also today, the Abu Dhabi National Oil Company announced a partnership with British Petroleum on the development of green hydrogen. In April, Mubadala unveiled an initiative to develop electric vehicle charging stations in Abu Dhabi.