“Made in Jordan”: Are consumers buying it?

The “Made in Jordan” campaign has been trying to instill a sense of pride in locally produced goods with the long-term goals of boosting industry and decreasing unemployment. 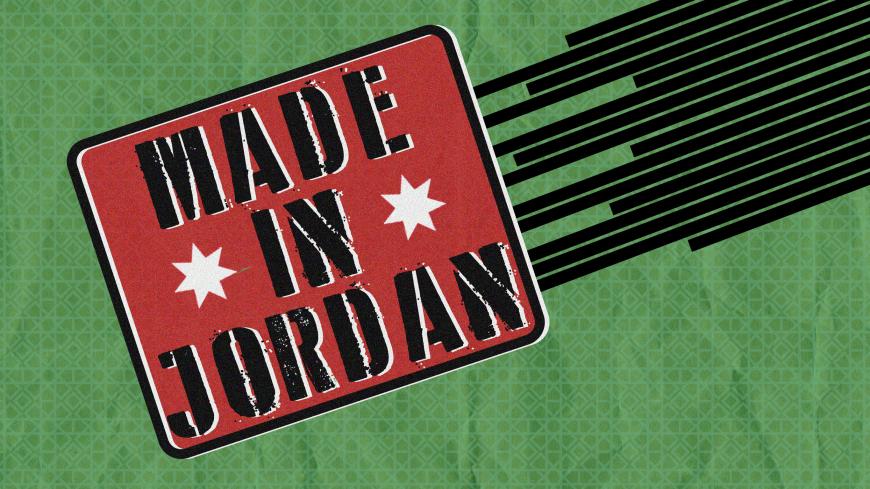 The Jordanian government and private industry hope the "Made in Jordan" campaign will convince Jordanians to purchase more locally made products instead of foreign goods. Image by Hugo Goodridge/Al-Monitor -

Raneem Nasser, a housewife, is reluctant to purchase Jordanian-manufactured products. “Foreign ones last a longer time,” she told Al-Monitor while shopping for household goods at SmartBuy in downtown Amman. Nasser is far from being the only member of her generation who prefers foreign appliances to household hardware made in Jordan, but an ambitious campaign aimed at younger generations hopes to counter this attitude and instill pride in locally produced goods.

Musa al-Saket, a board member of the Amman Chamber of Industry, told Al-Monitor that the lack of confidence in Jordanian-made products and the general assumption that foreign goods are of better quality dates to the opening of the Jordanian market to imports in the 2000s.

While the country’s business elite opted for the former, it was no easy task to get local consumers to choose Jordanian products over the available foreign imports. That is why the “Made in Jordan” campaign was launched in 2013.

Saket, who chairs the campaign, said, “[The goal is] to strengthen Jordanian citizens’ trust in domestic products and, consequently, boost local demand for them.”

Five years along, the campaign was fine-tuned in August 2018 with the introduction of a focus on new generations of consumers. Aware that youths search for most information online, the campaign’s website was revamped to feature Jordanian industries whose products excelled, list new brands and sectors and compare prices of local and imported products. The site also provides background on the importance of manufacturing industries for local employment.

The campaign's messages mainly play on national pride, emphasizing the concept of meeting local needs locally and promoting self-sufficiency; the quality of the products made by Jordanian workers; and the need to boost the local economy and make Jordan attractive to international investment. It's banner slogan is “Our Industry Is Our Pride.”

One aspect of the campaign is to push local success stories, such as the Jordanian Vegetable Oil Industries Company, which has developed a new, line of healthy oils. Video testimonies by satisfied consumers who use locally produced ovens, washing machines and domestic electronics have been produced and uploaded. Messages are shared on social media platforms, including on Facebook, Twitter and LinkedIn, and appear as newspaper, bus and outdoor advertisements.

Another tool used to get the attention of today's youth are school field trips to Jordanian factories so students can learn about various industries, production lines and the quality achieved in recent years. Public and private schools as well as those run by the United Nations Relief and Works Agency all take part in such trips.

In September, campaign managers selected students from different age groups to be “ambassadors,” charging them with explaining the campaign’s objectives to their classmates, teachers and their community, conduct activities related to the campaign in student clubs and associations and disseminate updated information about the campaign.

“Made in Jordan” focuses largely on the younger generations, but it also more broadly targets Jordanians of all ages and categories in an effort to deepen their conviction in Jordanian products and boost their desire to purchase products made by local industries, Saket said.

Yousef al Shamali, secretary-general of the Ministry of Industry, Trade and Supply, told Al-Monitor that his ministry and JEDCO provide 50% of the campaign’s funds.

“The Ministry is a member of the technical committee responsible for overseeing the implementation of the campaign and its work,” Shamali said. “Part of the progress is due to the fact that the public and private sectors work together to spread a common message. The ‘Made in Jordan’ campaign showcases a wide range of products and services that are a source of pride for the progress achieved by Jordanian industries in recent years and increased consumer confidence in these products worldwide.”

In addition to potentially instilling a sense of pride, local industries are also a source of much-needed employment. Figures compiled by the Amman Chamber of Industry indicate that 225,000 female and male workers, who support 1 million people (including themselves) from their labor, are employed in local factories. Local industry accounts for one-fourth of gross domestic product, and industrial exports account for 90% of total national exports, amounting to $7 billion a year, a considerable rise from $1 billion dollars in 1998, according to Saket. More than 125 countries import Jordanian products.

Mazen Ershid, an economist, told Al-Monitor, “The signing of free trade agreements took a heavy toll on local industry, which was unable to compete with better-quality products made in Turkey and China. Jordan should have waited until [local] industry got stronger before signing.” According to Ershid, it is now crucial to support local products and industry to decrease the outflow of foreign currency, cut the trade deficit and increase local employment.