Is Trump shifting toward Abbas?

According to statements by President Donald Trump at the UN General Assembly, it seems that the solution he envisions is closer to the one Palestinian President Mahmoud Abbas favors than to Prime Minister Benjamin Netanyahu’s status quo. 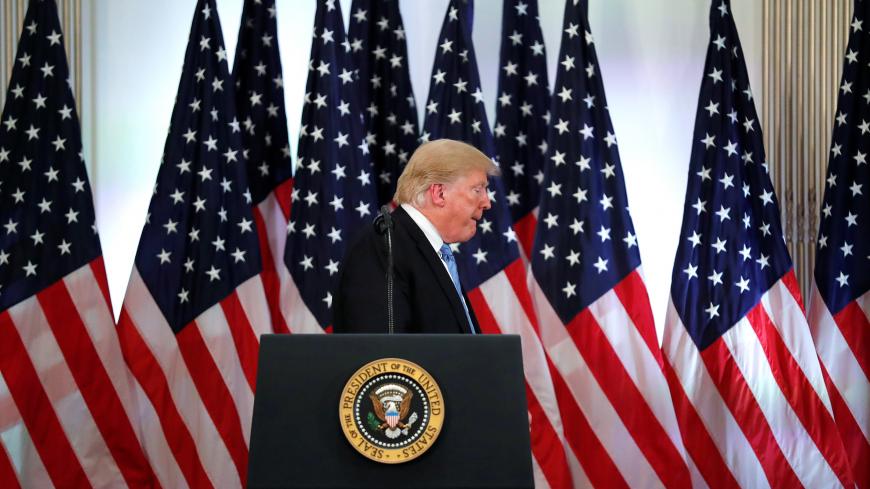 US President Donald Trump departs at the conclusion of a lengthy news conference on the sidelines of the 73rd session of the United Nations General Assembly, New York, Sept. 26, 2018. - REUTERS/Carlos Barria

There were no apparent surprises at the United Nations General Assembly meeting on the Middle East this year. Not in speeches delivered there, not in press conferences and not in talks held on its sidelines. However, this year’s session could actually point to a surprising shift in the relationship among the sides of the linchpin triangle consisting of the US administration, the government of Israel and the PLO leadership.

Ostensibly, all the players adhered to the roles in which they were cast for this annual performance. US President Donald Trump spoke about resolving the Israeli-Palestinian conflict in his nonbinding role as a sideline observer. He “likes” the two-state solution, he told reporters after his Sept. 26 meeting with Prime Minister Benjamin Netanyahu, only to revert to an even less binding commitment on the following day to support any solution the two sides favor. While Trump did not go back on his intention to present what he calls “the ultimate” Israeli-Palestinian peace deal, he is unwilling to commit to the timing of its unveiling — maybe in two months, maybe in three, maybe in four. In any case, according to Trump, Israel was dealt a better hand when he moved the US Embassy from Tel Aviv to Jerusalem this past May, and will have to compensate the Palestinians within the framework of this long-gestating deal.

Palestinian President Mahmoud Abbas reiterated his accusations that Israel was violating its agreements with the Palestinians. He claimed the United States had proven it could not be an honest broker between the sides and that the Palestinians could not accept its involvement unless it takes place within a broader framework of an international conference with the permanent members of the UN Security Council and with other participants. He repeated his opposition to any form of violence.

As for Netanyahu, he once again presented the Iranian threat, complete with his usual show-and-tell presentation, and did not hesitate to share with those in the half-empty UNGA hall sensitive intelligence information about a secret Iranian warehouse containing nuclear development equipment. Ironically, a US intelligence source told Reuters after the speech that the Americans know all about the warehouse and it does not contain any such equipment. Netanyahu only referred to the Israeli-Palestinian dispute in an off-handed manner, saying the bad 2015 nuclear agreement between world powers and Iran led to closer Israeli cooperation with some Arab states, with which he hoped to achieve peace — as he hopes to do with the Palestinians. That was all.

On the face of it, the events at the UNGA and on its sidelines were expected and obvious. In fact, what emerged was a far more complex picture. In many respects, it has been two against one in this triangle since Trump assumed office in January 2016: Trump and Netanyahu versus Abbas. Trump flatters Netanyahu, cites Russian President Vladimir Putin as saying he is “a fan” of Netanyahu’s, the two see eye to eye on the Iranian threat and to a large extent Trump is Netanyahu’s disciple when it comes to hating the Islamic Republic.

On the other hand, Trump has not given up on the “ultimate deal” he promised to forge soon after taking office, and he knows that if the Republicans lose their majority in the Senate in the midterm elections next month, he will be far more constrained on domestic issues and will shift his game to the international arena. He thinks he is capable of resolving our long-festering conflict with the Palestinians and he believes in himself and the team he set up to advance this move.

In August, Trump told Jordan’s King Abdullah II that in the event of a one-state solution, Israel could find itself with a prime minister named Mohammed. His comment reflected his understanding — like that of his hated predecessor Barack Obama — of the demographic threat to Israel’s Jewish, democratic character unless it supports a two-state solution.

Trump’s chosen path toward a historic solution to the conflict is troubling, as it is based on an assumption that the Palestinians will only return to US-sponsored negotiations under financial duress. It tramples Palestinian dignity (just as does his attitude toward Iran), but his desire for renewed negotiations is unequivocal. The solution he envisions is also apparently much closer to the one promoted by Abbas than to Netanyahu’s adamant embrace of the status quo.

The expression on Netanyahu’s face as he heard Trump speaking at their joint New York news conference Sept. 26 about favoring a two-state solution was reminiscent of the frozen expression on his face that the cameras caught when Obama spoke in a similar vein at the time. There is no way on earth that Trump’s remark about two states was coordinated in advance with Netanyahu. Trump’s seeming retraction of this scenario after their meeting the next day likely stemmed from his Israeli guest’s request not to get him into hot water with his coalition partners, who were quick to slam the idea.

The closeness between the two leaders on the Iranian issue is strategic in nature. On the Palestinian one, it is tactical, and it rests on very thin ice. The minute there is any talk of significant movement on this front, the ice will crack. This year's UNGA meeting could signal a shift in the tripartite power balance. If the Trump team convinces Abbas to accept US mediation with Israel in light of the president’s comment favoring two states, a clearer picture will emerge. While Trump will not revoke his decision to move the US Embassy to Jerusalem, the Palestinians may be swayed by a US commitment in principle to recognize a Palestinian capital called Al-Quds (the Arabic name for Jerusalem) within the framework of a peace agreement, and by US willingness to rescind all the budgetary sanctions imposed on them in recent months.

Two sides of the American-Israeli-Palestinian triangle are seeking a change in the status quo, while one (Netanyahu) strenuously objects. To the extent possible, Netanyahu will try to postpone the decisive moment and the unveiling of the Trump plan because he cannot agree to any blueprint involving the division of the land between the Mediterranean Sea and the Jordan River into two states. If the administration succeeds in bringing the Palestinians on board, Netanyahu will be the one who finds himself thrust into a corner by the two other sides of the triangle.