A dramatic exchange of accusations between Prime Minister Benjamin Netanyahu and a former minister seen as his likely successor has backfired on Gideon Sa'ar and left Netanyahu more untouchable than ever. 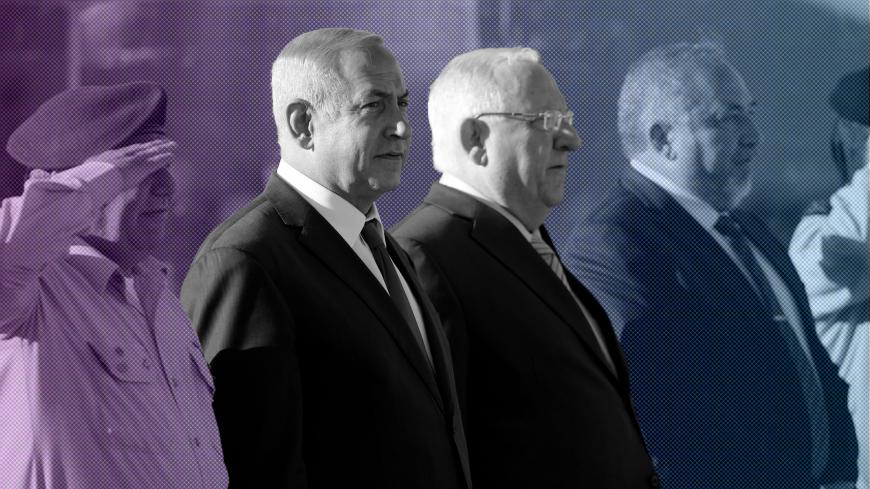 Prime Minister Benjamin Netanyahu exchanged accusations with former minister and fellow Likud member Gideon Sa’ar over the past two days, with Netanyahu accusing Sa’ar of plotting against him. Netanyahu's actions can be seen as a reflection of the uncertainty of the next election, with criminal investigations hovering over him.

While it is possible that the prime minister is paranoid, the bottom line is that everything Netanyahu did is part of his fight for survival. It meant removing Sa’ar, who has regained public and political strength over the last few months and is frequently mentioned as Netanyahu’s heir. It also meant preventing a scenario based on rumors surrounding President Reuven Rivlin, who is despised by Netanyahu but is a close friend of Sa’ar. The rumor goes that Rivlin will prevent Netanyahu from forming the next government.

How? The law states that after the election, the president gives the task of forming a new government to the Knesset member he believes has the best chance of assembling a majority. The law does not require the president to pick the head of the largest party, nor does it state that it even has to be head of a party. After the 2009 elections, President Shimon Peres tasked Likud head Netanyahu to compose a government, though Kadima head Tzipi Livni amassed more Knesset seats.

Ostensibly, Rivlin could decide after the next election that Sa’ar is best suited to form a government even if Netanyahu, as head of the Likud, wins the election by a huge margin.

According to a report by Israel Hayom, Netanyahu received information that the heads of the opposition parties are plotting with Sa’ar and Rivlin to prevent him from forming the next government because of the criminal investigations he faces. The claim has not been substantiated in any way and is based entirely on rumors and political assessments. In other words, it sounds like a conspiracy theory. But even so, Netanyahu lent it credence by announcing through his coalition chairman, David Amsalem, that he plans to amend the Basic Law to reduce the president’s power and prevent a Knesset member who is not the head of a party from forming a coalition.

Rivlin has never hidden his disdain for Netanyahu or any of the bad blood between him and the prime minister. His spokesmen reacted with a scathing response, accusing Netanyahu of being paranoid and saying, “Dealing with such phenomena should be left to professionals who are not spokespeople.”

Netanyahu addressed the potential threat directly in a video his staff disseminated on social media that day. While celebrating his 69th birthday with his wife, staff and senior Likud members, Netanyahu delivered the following monologue: “I have known for the past few weeks that a former Likud minister has been speaking with members of the opposition and planning a subversive plot. Even when I lead the Likud to an overwhelming victory in the next election, they will still make sure that I am not prime minister. They will be acting against the will of the Likud electorate, against the will of the people and against democracy itself. … We will see what we will do about it.” Netanyahu went on to call the idea “the plot of the century.”

If these words sounded like a paranoid attack and a total loss of control, it soon became apparent that it was all carefully orchestrated, as within hours, Sa’ar would walk right into his trap. Sa’ar’s decision to take the gloves off an interview to Army Radio was exactly what Netanyahu hoped he would do. Sa’ar sounded articulate. He was scrupulous and bold. After all, it has been years since any Likud senior dared to speak about Netanyahu like he did. Among his many comments, Sa’ar said that the prime minister decided to make “false accusations” against him. “That is very serious. It crosses a red line. … It is a highly publicized court martial without any facts.” Sa’ar called on Netanyahu to retract his statement or apologize.

Netanyahu’s inner circle responded within moments, and there was no apology. Instead, they stepped up their attacks. Sa'ar was accused of acting hysterically and of planning a subversive attempt to “undercut the prime minister.”

It looks like Sa’ar just got a political promotion and is now positioned as Netanyahu’s main political rival. Netanyahu created the perfect justification to attack and heap abuse on him. I a second stage, assuming that he wins in the next election, he will have the perfect excuse to sideline Sa’ar entirely. It would be the same brutal course that Netanyahu followed with Silvan Shalom, another former minister.

Netanyahu is now at the height of his power, both in the Likud and among the general public, and his attack on Sa’ar was politically lethal. Now, other Likud Knesset members and ministers will distance themselves from him so as not to be suspected of conspiring against the prime minister. Indeed, not a single minister has come out in Sa’ar’s defense.

A poll released by the News Corporation in the evening of Oct. 25 found that more Likud voters believe Netanyahu (37%) than Sa’ar (13%). It's the opposite of the feeling among the public at large, where Sa’ar enjoys more trust (35%). The problem is that the people who will ultimately decide his fate are Likud voters, since they will elect the Likud’s Knesset list for the next election. On the other hand, Sa’ar may find comfort in a poll released at the same time by Channel 10. It found that the Likud would win 25 seats with him as head of the party, compared to 30 seats with Netanyahu as head. This may explain why Netanyahu feels so threatened by a political outsider.

Netanyahu may be paranoid, but he has managed to neutralize a potentially powerful political rival. And Netanyahu’s maneuver doesn’t stop at Sa’ar, effectively paralyzing the president. Rivlin now knows that anything he says or does after the election will come under extreme scrutiny. Then there is still the amendment to reduce Rivlin’s power.

These dramatic events demonstrate that Netanyahu is extremely tense right now with early elections in the air and news that the police are in the final stages of wrapping up their investigations.