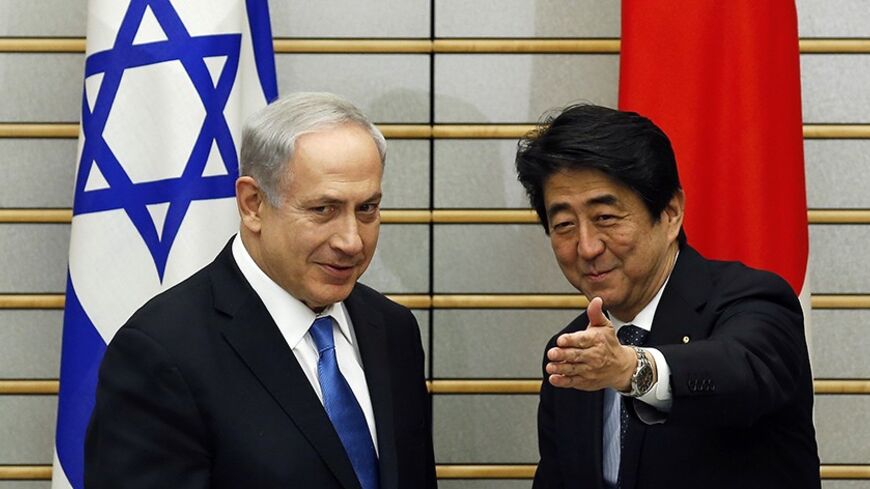 Israeli Prime Minister Benjamin Netanyahu meets with Japanese Prime Minister Shinzo Abe at the start of their meeting at the Japanese prime minister's official residence in Tokyo, May 12, 2014. - REUTERS/Toru Hanai

On May 12, shortly before noon Israel time, just a few hours before the Knesset began its summer session, Prime Minister Benjamin Netanyahu met with the Japan-Israel Parliamentary Friendship Association in distant but embracing Tokyo. In his speech, he heaped praise on the friendship between the two countries, emphasizing the common bond between the two: “We're both democratic, progressive, technological societies.”

The thing is that at that very moment, Israel’s democracy actually seemed battered and beaten as a result of the strange conduct of the prime minister and his outrageous and misplaced actions.

We’ll start with the fact that Netanyahu chose not to honor the opening of the Knesset’s summer session with his presence. He preferred to take his family on a visit to this exotic country instead, expressing the scorn with which he regards the Knesset, the nerve center of Israel’s democracy. After all, nothing important or dramatic was expected to take place in Japan on those specific days, so it was unclear why Netanyahu couldn’t postpone his official meetings with the government leaders and local businessmen by a few days.

But Netanyahu did not only fail to attend the opening of the Knesset session, which usually includes a celebratory speech by the prime minister. While in Tokyo, he continued sabotaging Israeli democracy, the same institution he boasted about to the Japanese parliamentarians. From the moment he landed on Japanese soil, Netanyahu renewed his efforts to postpone Israel's presidential election, set to take place this July.

Netanyahu conducted urgent talks with senior members of the Likud Party and the coalition in an attempt to convince them to support his initiative. Sources who spoke to Netanyahu concluded that the prime minister has an uncontrollable ambition to abolish the institution of the presidency. If this is true, such a move actually began this week, with the government postponing the elections by six months. In that time, a committee would be created to study eliminating the presidency altogether.

Netanyahu offered complex, detailed explanations as to why this office is superfluous and wasteful. It was as if the government he heads hadn’t recently approved an upgrade of the prime minister’s official residence and office and the acquisition of a plane at a total cost of 1 billion shekels (about $300 million), while ignoring the expense of the Japan trip, which cost taxpayers about $1 million.

The truth is that no one in the political system, not even among the ministers and Knesset members from the Likud, is buying his explanations.

It's an open secret in the political system that Netanyahu's unbridled ambition in this area stems from his desire to prevent presidential hopeful and Knesset member Reuven Rivlin from being elected. Rivlin is one of the most reviled people in the Netanyahu household.

In his time as Knesset speaker (2003-2006 and 2009-2013), Rivlin's relations with Netanyahu were marked by conflict. Thus, his election would deal Netanyahu a significant blow.

Netanyahu is afraid that Rivlin will act against him or even prevent him from forming the next government by using his presidential authority to grant the mandate to form a government to the chair of some other party. Netanyahu well remembers the favor that Rivlin showed to Justice Minister Tzipi Livni when she was chair of the opposition, instead of providing Netanyahu with the political backing he expected.

But there is no real need to delve into the history of the convoluted relationship between the two men. What matters is the result. The prime minister of Israel is taking clear measures to eliminate the long-established institution of the presidency, one of the national symbols of the State of Israel, anchored in a Basic Law (a law that will one day be part of Israel’s Constitution), all on a whim. This is an intolerable act, disrupting the checks and balances of the very same democracy about which Netanyahu boasts.

Netanyahu’s plan seemed so preposterous at first that the Likud Party itself didn't take it seriously. Then, this weekend, it turned out that the prime minister was serious, and rebellious grumbling could soon be heard. Interior Minister Gideon Sa’ar used his Facebook page to make it perfectly clear that he opposes the initiative and that he would take action against it. He was joined by other Knesset members, but even then, Netanyahu didn’t back down. Quite the contrary, he simply continued his efforts to stop Rivlin.

A Likud minister said May 12 that he hadn't thought it was possible, “but Bibi [Netanyahu] has already broken his own record for obsessive and paranoid behavior, as if it were Rivlin standing between him and another term in office, and not the public.”

The chances of Netanyahu eliminating the presidency are slim, but harm to its status has already been done. When the prime minister of Israel declares publicly that the position of president is superfluous, it leaves a lasting impression. What's more, Netanyahu makes these statements at the climax of an already dirty war over the position.

And that is not the only harm that Netanyahu has caused recently in his efforts to preserve the country’s democracy and the independence of the Knesset. He is the person who delayed until the very last moment the appointment of a chair for the Knesset’s Foreign Affairs and Defense Committee, which has operated without a permanent chair for the past half year. This committee is considered one of the most prestigious in the Knesset. As the body that oversees the country’s defense system, it is certainly one of the most important. Yet it also fell victim to political infighting and personal caprices.

The quarrel between the chairman of Yesh Atid, Finance Minister Yair Lapid, and the prime minister have prevented the committee from functioning, critiquing or even voicing its opinion. In the end, the Supreme Court was forced to intervene. One hour only before the matter supposed to be brought before the Knesset for approval, a compromise was reached from distant Tokyo. The chairmanship of the committee would be rotated between Knesset Members Ze’ev Elkin (Likud) and Yariv Levin (Likud), Tzachi Hanegbi (Likud) would be appointed Deputy Minister of Defense and a Yesh Atid member would be made a senior deputy minister.

As far as Netanyahu was concerned, the Foreign Affairs and Defense Committee could have been run without a chairman until the end of the term. But the crisis that the stalemate presented was already on the verge of exploding, and he was forced to cobble together this bizarre compromise. Along the way, he managed to harm yet another important institution.

Upon returning from Tokyo, Netanyahu plans to become personally involved in promoting the Jewish State Basic Law, intended to anchor the definition of the State of Israel as a Jewish state in law. By granting legal preference to the Jewish character of the state over its democratic character, the law will lead to discrimination against the country’s minority populations. Netanyahu would like to see this bill brought up as a law proposal under his name. The way he sees it, this bill will help him to rebuild the trust with the right — trust he has lost for being suspected of planning to give up parts of the country in the diplomatic process, which has since fallen apart.

Netanyahu is not bothered by the fact that this law might also damage the delicate democratic balances, as long as it serves his political survival. With no diplomatic process, and with the campaign against the Iranian threat suffering blow after blow, this is actually all that he has left.