In cooperation with the World Bank, Iraq has launched a social welfare project to assist unemployed and impoverished Iraqis. 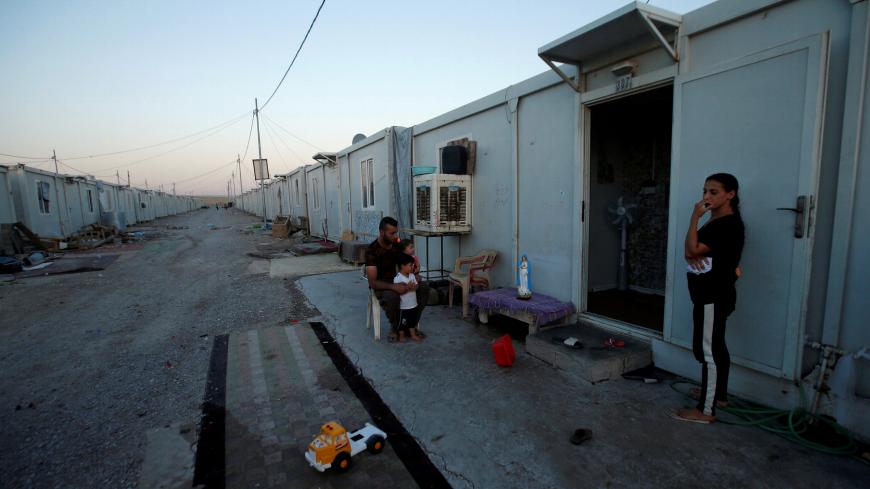 The Iraqi Ministry of Planning announced the launch of the Social Fund for Development on Sept. 23, with initial capital of $300 million, in cooperation with the World Bank.

The project aims to improve the living conditions of Iraq's poor. High poverty rates in Iraq have led to repeated protests for 15 years calling for improving the standard of living and for more employment opportunities. These protests have resulted in dozens of deaths and injuries.

A May 2018 World Bank report noted that Iraq's population of 38.5 million sits at the poverty line with a poverty rate of 22.5%. The spokesman for the Iraqi Ministry of Labor and Social Affairs, Ammar Menem, told Al-Monitor that this high rate is due to “exceptional security conditions ensuing from the war and its costs, as well as to the slump in oil prices. This resulted in the cessation of funding of projects for the rehabilitation of unemployed persons, a lack of investment projects and faltering economic growth.”

Najla Ali Murad, the director of Iraq's Poverty Reduction Strategy, defined the expression “poor individual” in Iraq as “a citizen with a monthly income of less than 105,000 Iraqi dinars ($88)." She told Al-Monitor that this definition applies to individuals and families who are exposed to emergency economic hardship, such as the suspension of the monthly ration card. “Poverty is currently concentrated among those displaced by the war against the Islamic State (IS)," Murad said.

Mudher Mohammed Saleh, an economist and financial adviser to the Iraqi prime minister, said, “The Social Fund for Development (SFD) is an aspect of development financing in line with national strategies to address poverty and economic and social failures."

Saleh said, “Iraq suffers from a substantial imbalance in the geographical distribution of income and wealth, since poverty rates are soaring up to 50% of the population in major provinces.” He added, “Employment is still plaguing the provinces liberated from IS, especially among youth groups. In these provinces, around 40% of the total economically active labor force is jobless.”

He said the SFD’s objective is to reduce unemployment and poverty rates to one digit. “High levels of poverty in the long run create serious social and political problems," he said.

“The SFD aims to empower and support small and medium business opportunities," he said. "This would turn it into one of the pillars of the 2018-2022 development plan in its capacity as a financing force for society and the market. The SFD adopts the philosophy of a social market economy based on increasing Iraq's annual gross domestic product beyond the population growth rates.”

On its website, the World Bank stated, “In 2018, the SFD activities will start in three governorates: Muthanna, which has the highest poverty rate, [Salahuddin], as a liberated area with many returnees, and Dohuk, where host communities were significantly impacted by internally displaced people and Syrian refugees. In 2019, the program will expand to Ninawa, Thiqar, Qadisiya and Baghdad. Starting year 3, the program will expand to all governorates in Iraq.”

Abdel Zahra al-Hindawi, a spokesman for the Ministry of Planning, told Al-Monitor that Iraq's financial crisis stems from low oil prices and the high cost of fighting IS. It has forced the country to rely on external financial support and loans and grants. “Iraq has already obtained a soft loan from the World Bank,” he said.

“I am not optimistic about initiatives launched by international or government institutions within the scope of the poverty reduction strategy, including the SFD in Iraq,” said Mohammed Zaki Ibrahim, an expert at the Iraqi Oil Ministry. “I have observed several initiatives launched by the government to support the agricultural sector, or tourism, or small enterprises. Nothing tangible has ever been achieved by these initiatives. A large part of these loans remained unpaid and the government was forced to reimburse it.”

Ibrahim believes Iraq needs not only money to launch such projects, but also legislation that guarantees their success, such as customs protection or insurance. “Rampant administrative corruption usually hinders the chances of success of such initiatives, and therefore the heavy borrowing policy adopted by the Iraqi government at this stage will not serve development.”

Salam Smeasim, an economic expert and former member of the Iraqi National Coalition, told Al-Monitor, "The Ministry of Planning has always launched projects with catchy titles that best describe its strategy. But its previous strategies based on seeking grants and economic support led to a decline in economic performance. The ministry had previously prepared a poverty reduction strategic plan, but the poverty rate rose to more than 40% in some provinces.”

Smeasim expected the SFD in Iraq to be another failed project amid the absence of proper implementation mechanisms.

Hussein Thagb, economics editor at Al-Sabah newspaper, argued that "regardless of the dispute on the methods of financing the SFD, financing remains necessary for similar projects and initiatives in order to raise the level of services provided to the citizen, reactivate suspended projects and prepare new ones to meet the requirements imposed by the high rates of population growth.”

“This fund will surely achieve its objectives if it is financed by international parties, especially if the financing is accurately tracked and supervised so as to prevent any waste,” he told Al-Monitor.

Thagb added, “No one questions the objectives of the SFD, aimed to improve the economic and social conditions of the poor, low-income and displaced people, but there is little trust in the mechanisms and ways of disbursing money in light of the corruption that has previously wasted the financing granted to many similar projects.”