Iraqi Kurdistan held its parliamentary elections one year after its failed bid for independence, but low voter turnout and claims of voter fraud are tainting the results. 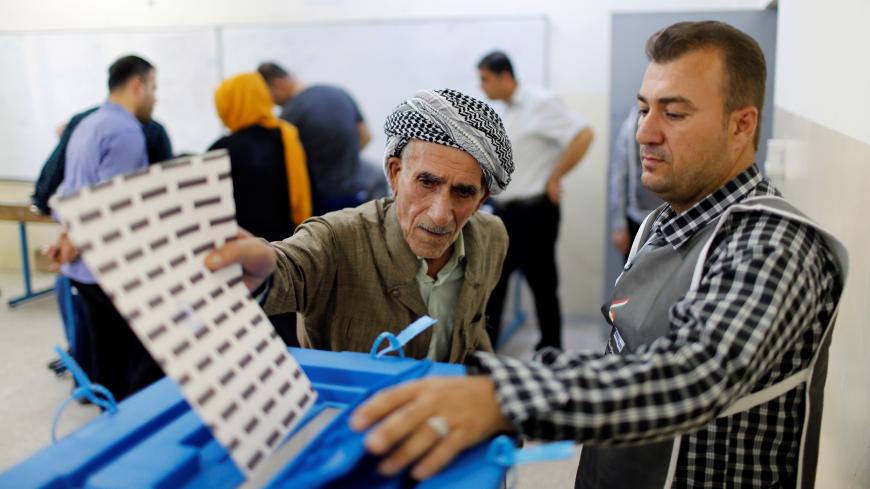 SULAIMANIYAH, Iraq — Iraqi Kurds voted Sept. 30 in parliamentary elections that witnessed low voter turnout, fraud and early threats to reject the results — which may push the land-locked region further into uncertainty after last year’s failed bid for independence from Baghdad.

The vote is the first since the war against the Islamic State (IS), economic hardship and political infighting that followed the doomed referendum, which provoked a firm response from Baghdad.

The Kurdistan Regional Government's Independent High Elections and Referendum Commission (IHERC), which supervises elections, reported that 29 political blocs and 773 candidates, including 241 women, are competing for the 111-seat house. Of the total population, 3,085,461 Iraqi Kurds were deemed eligible to vote in the general polls to elect members of parliament for their regions.

The results will be announced 72 hours after the polls close, but a significant change in the political map of the region is not expected — meaning that the two main parties, the Kurdistan Democratic Party (KDP) and the Patriotic Union of Kurdistan (PUK), will remain dominant.

Early voting began on the morning of Sept. 28, when some 170,469 peshmerga forces and other security forces began voting.

The Metro Center for Defending the Rights of Journalists said in a statement that security forces broke the law during the early voting period by banning media channels from covering the process and beating some journalists who were also covering it.

Polling stations were opened to everyone early Sept. 30 across the region, but at around noon the turnout was low, about 10%, prompting political parties —especially the KDP and the PUK — to urge voters to go to the polling stations.

Some people told Al-Monitor they were boycotting the voting process.

“I boycotted voting [because] I do not believe in elections here — [voting] never changes anything. Overall, the past years the same old faces are the rulers of the Kurdistan Region,” said Hanar, 40.

Although the IHERC announc­­ed six decrees late Sept. 29 to prevent voting fraud — including making it mandatory for voters to bring both their nationality ID cards and their citizenship papers in order to vote — many irregularities, including organized fraud and armed conflicts, still occurred.

Bestun Fayaq, a Kurdish lawmaker from Gorran, told Al-Monitor that officers from the directorate of the Sulaimaniyah governorate brought a large number of blank Iraqi nationality IDs to the polling stations to make fake IDs for the purpose of voter fraud. The IHERC announced Sept. 30 that they confiscated forged IDs from some party loyalists, indicating the perpetrators would be brought to justice.

Unknown gunmen stormed the Bradost polling station in Sulaimaniyah Sept. 30. Police responded by firing bullets, and one person was wounded. The polling station was closed.

All polling stations were closed at 6 pm local time, and the IHERC announced that voter turnout across the Kurdistan Region was 57%. Turnout was 58% in Erbil; 53% in Sulaimaniyah; 61% in Duhok; and 60% in Halabja.

As soon as voting stations closed, PUK official spokesman Saedi Ahmed Pira announced that his party would reject the results. But Qubad Talabani, head of the PUK’s electoral list, later called on political parties to behave "responsibly," rejecting the PUK spokesperson's statements denouncing the results and saying that "it is too soon to accept or reject the results."

Both the PUK and Gorran later claimed victory in Sulaimaniyah and announced unofficial preliminary results through their media outlets. The PUK also claimed its votes in Erbil increased by 50% in comparison to the 2013 elections and said it had won almost 150,000 votes. The PUK committee in charge of the party participation in the election said that wide-scale voter fraud had been conducted in Erbil and Dahuk by the KDP, and they will file complaints with the IHERC.

Meanwhile, KDP leadership councils in Sulaimaniyah and Halabja alleged widespread election fraud in Sulaimaniyah province. Khasrou Goran, head of the KDP committee in charge of the election, said the party has filed complaints with the election commission concerning allegations of fraud and assault against election monitors.

Sarkawt Shams, a member of Iraqi parliament's New Generation, posted photos on Twitter showing an observer from his party who had been beaten severely in Erbil when he tried to prevent fraud at a polling station, pointing out dozens of injured observers.

Ismail Khurmali, an IHERC official, said at a press conference in Erbil that officials "no longer have contact with some of the [polling] stations in Sulaimaniyah,”

An employee with IHERC in Sulaimaniyah who chose to remain anonymous for fear of possible retribution told Al-Monitor he was beaten when he tried to stop voter fraud by the ruling parties.

“Whether there were actually incidents of fraud, Kurdistan and its transition [to democracy] need a clean and widely accepted electoral process. However, we should not forget that no election in the past has been free of fraud. What changed this time is that not just the opposition, but the KDP and the PUK are also accusing each other of fraud — which is qualitatively more concerning than in the past,” Bilal Wahab, a Wagner fellow at The Washington Institute for Near East Policy where he focuses on Kurdistan governance, told Al-Monitor.

Wahab believes that despite all allegations of fraud, the election may have some positive sides.

“We should also recognize that this election and the campaigning that preceded it was probably the quietest in Kurdish history [because] we did not see violence, we did not see the burning of opposition headquarters [nor] political assassinations, and so far we have seen much less violence than that in the May Iraqi elections.”