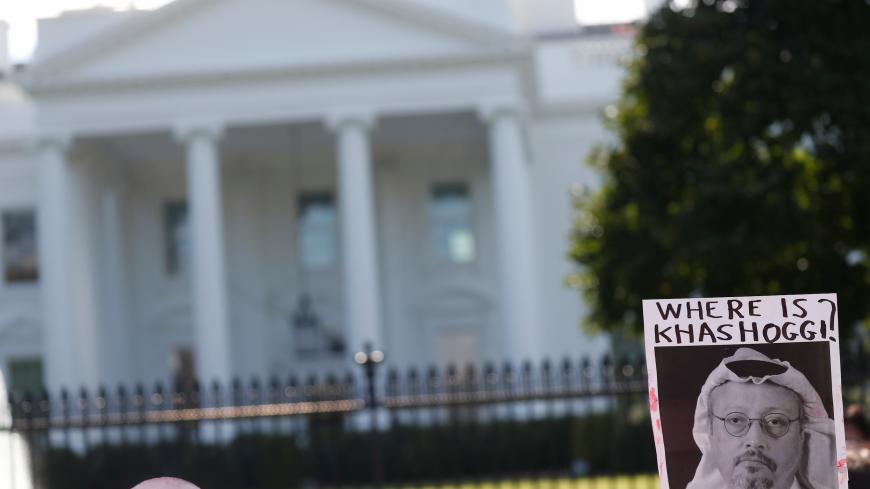 An activist holds an image of Saudi journalist Jamal Khashoggi during a demonstration calling for sanctions against Saudi Arabia and to protest Khashoggi's disappearance outside the White House in Washington, US, Oct. 19, 2018. - REUTERS/Leah Millis

Key Republicans are putting the brakes on a nuclear cooperation deal with Riyadh as blowback over the slaying of journalist Jamal Khashoggi continues.

Five Republican senators have asked President Donald Trump to end talks with Saudi Arabia over a deal that would allow Riyadh to develop a civilian nuclear program using US technology. The quintet sent a letter to Trump today threatening to block any such deal with the Saudis, citing the Khashoggi affair, the Yemen war and last year’s bizarre alleged detention of Lebanese Prime Minister Saad Hariri.

“The ongoing revelations about the murder of Saudi journalist Jamal Khashoggi, as well as certain Saudi actions related to Yemen and Lebanon, have raised further serious concerns about the transparency, accountability and judgement of current decision-makers in Saudi Arabia,” the senators wrote. “In turn, these serious questions have solidified our reservations about pursuing a potential US civil nuclear agreement with Saudi Arabia.”

If Trump goes ahead with a deal, the senators wrote, they will introduce legislation to block it.

Gold standard: The blanket refusal to approve any civil nuclear agreement with Riyadh — no matter how robust — is a marked escalation in congressional rhetoric. Congress had previously been willing to allow an agreement as long as it adhered to the so-called gold standard, which would prohibit Saudi Arabia from certain activities that could be used in a nuclear weapons program.

In the letter, the senators note that the Saudis have “for many years” refused to accept an agreement that includes “requirements against pursuing technologies to enrich uranium and reprocess plutonium-laden spent nuclear fuel.”

What’s next: If Washington and Riyadh agree on a deal, Congress has the opportunity to veto it. Today’s letter indicates that even the most robust “gold standard” agreement will face an uphill battle on Capitol Hill. Congress has also ordered the Trump administration to launch a federal probe into Khashoggi’s death, which could lead to sanctions against senior Saudi officials. And just this week, Secretary of State Mike Pompeo called for an end to hostilities in Yemen as Congress threatens to advance legislation ending US support for the Saudi-led war against the Houthis.

Know more: As congressional correspondent Bryant Harris reported last month, not all Republicans are as wary of a Saudi nuclear deal — read his scoop on how some of them blocked legislation on the matter here. But that was before Khashoggi’s death. Make sure to follow Al-Monitor to keep tabs on the damage the scandal has done to the Saudis’ reputation in Washington.