The European Union will withhold 70 million euros over Turkey's failure to stop its democratic decline in a blow sure to hurt Ankara where it counts. 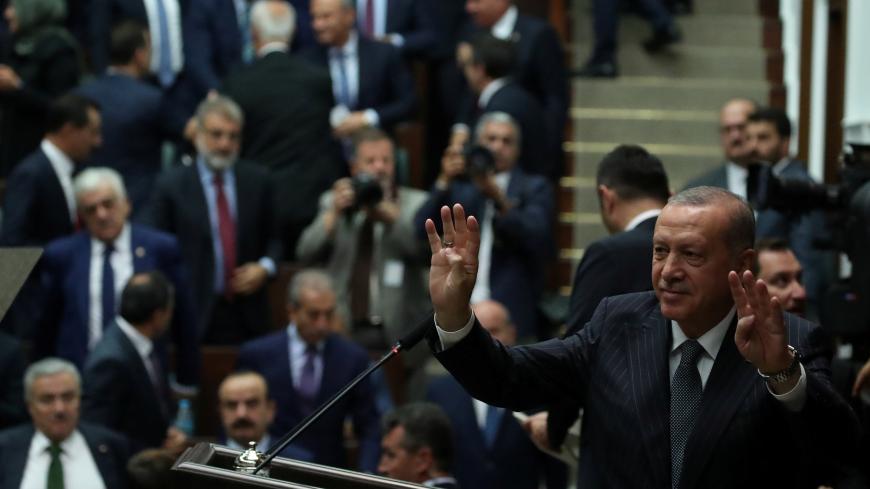 Turkish President Recep Tayyip Erdogan greets members of parliament from his ruling Justice and Development Party during a meeting at the Turkish Parliament in Ankara, Turkey, Oct. 2, 2018. - Reuters/Umit Bektas

The European Parliament voted overwhelmingly today to withhold 70 million euros in pre-accession funding after members decided that Turkey had failed to arrest democratic backsliding. The chamber voted 544 in favor and 28 against the motion to retain from Turkey the funding extended to countries that are in full membership talks with the European Union.

Turkey began formally negotiating with the European alliance in 2005. It is the first candidate country to be slapped with such sanctions, Deutsche Welle reported.

In a statement outlining the reasons for withholding financing, Romanian member of the European Parliament’s Christian Democrat bloc Siegfried Muresan noted the body’s concern over Turkey’s growing estrangement from European values and the deterioration in fundamental rights and freedoms in the country.

The move comes amid a severe economic downturn in Turkey that has seen a big jump in inflation, with the Turkish lira shedding around 40% of its value since the start of the year.

In November, the European Parliament had decided that the funds would be placed in reserve pending “measurable sufficient improvements” to rule of law, democracy, human rights and press freedom issues in Turkey.

The government tightened its grip in the wake of the failed July 2016 coup. In the ensuing crackdown, tens of thousands of people accused of links to the coup plotters have been purged from the bureaucracy, the security services and academia and/or imprisoned. At least 100 journalists are currently in jail on thinly supported terror charges. Hopes that Turkey’s President Recep Tayyip Erdogan would meaningfully ease pressure in a bid to salvage the economy have yet to materialize.

Erdogan paid lip service to repairing ties with the European Union ahead of a state visit to Germany last week and in what observers called a sweetener, Turkey freed several German citizens being held in Turkey over political charges.

In an inaugural session of the Turkish Parliament yesterday, Erdogan said with no hint of irony that while “certain European countries used anti-Turkish sentiments for domestic political gain,” it “is absolutely out of the question that we turn our back on our biggest trading partner [the EU] and where five million brothers of Turkish origin reside.” He reassured lawmakers, “We are leaving this this difficult period [with the EU] gradually behind.”

Most Europeans would argue that it's Erdogan who has used anti-Western sentiments — he likened German Chancellor Angela Merkel to the Nazis — to bolster his own domestic standing. He has consistently blamed them for Turkey’s economic problems, all part of an alleged global conspiracy to weaken and dismember Turkey.

The most immediate test of Turkey’s course comes on Oct. 12, when North Carolina pastor Andrew Brunson is due to appear in court again in the Aegean port city of Izmir, where he is being held under house arrest on an Orwellian array of espionage and terror charges. His case has become a lightning rod in Turkish-US ties, with President Donald Trump very publicly embracing his cause via Twitter.

The Trump administration is widely expected to follow through with its threats of further sanctions if Brunson is not allowed to go home, dealing a further blow to Turkey’s tottering economy. An multi-billion-dollar fine on Turkish state lender Halkbank over its central money laundering role in helping Iran evade US sanctions is looming and the terms will likely be harsher should Turkey persist in holding Brunson and other US citizens as bargaining chips for leniency in the case, as alleged by Washington.

Aykan Erdemir, a former Turkish lawmaker and a senior fellow at the Foundation for the Defense of Democracies, believes that this time around, Brunson stands a better, albeit still slim, chance of being freed.

Erdemir told Al-Monitor, “The dismal condition of the Turkish economy and Erdogan’s ensuing need for Western funds have led to the recent release of a number of Western nationals held on dubious political charges. This has also raised hope for Pastor Andrew Brunson’s release from house arrest."

Erdemir cautioned, however, “Since the US Treasury’s pending fine on Halkbank remains one of the biggest risks for the country’s fragile economy, Erdogan is in desperate need of bargaining chips to be used against Washington. The Turkish president, therefore, might not be too keen to let go his top trump card in bilateral relations.”

Cansu Camlibel, the pro-government daily Hurriyet’s Washington correspondent, noted in her most recent column, “My impression is that as long as Washington tries to keep Ankara on edge with coercive public declarations, Pastor Brunson’s release would be in further jeopardy.” She added, “I heard there are people in government circles who not only oppose Brunson’s release but advocate for his return to jail.”