Trump lashes out at Erdogan, threatens sanctions over Brunson

The strain between Turkey and the United States hits another high point as the US president threatened Ankara with "large sanctions" if it does not free detained American pastor Andrew Brunson. 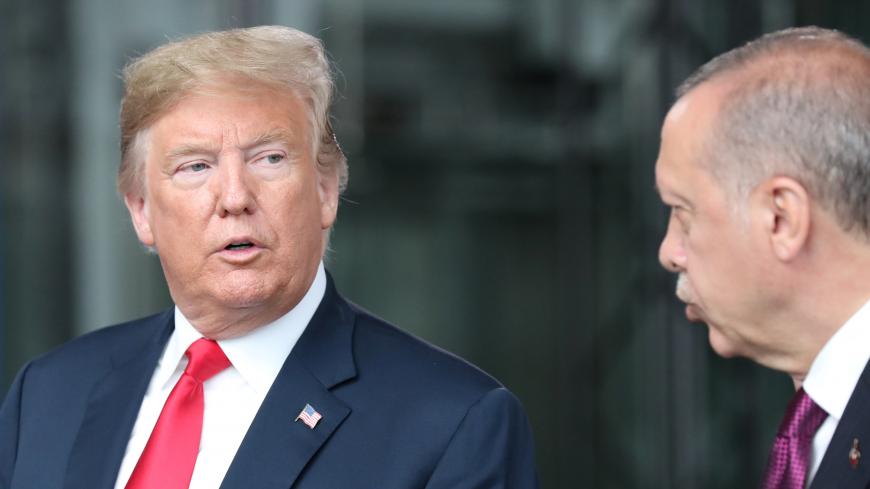 Turkey's increasingly turbulent relationship with the United States lurched into uncharted waters following threats of "large sanctions" in a July 26 tweet from President Donald Trump over the continued detention of a North Carolina pastor in a Turkish prison. The US leader wrote, “The United States will impose large sanctions on Turkey for their long time detainment of Pastor Andrew Brunson, a great Christian, family man and wonderful human being. He is suffering greatly. This innocent man of faith should be released immediately!”

The salvo came after a telephone call between Trump and Turkish President Recep Tayyip Erdogan. A readout of the conversation was not available as Al-Monitor went to press.

It remains unclear how Turkey will respond to the president’s warning, the harshest ultimatum to Turkey in recent memory that sent the Turkish lira falling sharply against the dollar. But the tone set by Turkish Foreign Minister Mevlut Cavusoglu in a tweeted initial response was defiant: “No one dictates Turkey. We will never tolerate threats from anybody. Rule of law is for everyone; no exception."

Erdogan, who seemed to have struck up a cordial relationship with Trump, is on an official visit to South Africa and had not commented as Al-Monitor went to press. Until now, the Turkish official narrative was that Trump, who recognized Turkey's value, was batting for Erdogan while his misguided underlings were doing the opposite. This can no longer fly.

Trump’s ultimatum came on the same day US Vice President Mike Pence also threatened Turkey with sanctions unless it frees Brunson, who has led a tiny congregation in Izmir for the past 23 years. The 50-year-old is being tried on thinly evidenced espionage and terror charges. Speaking at the close of a three-day conference on religious freedom, Pence warned that if Turkey does not move immediately to free Brunson, “the United States of America will impose significant sanctions on Turkey.”

The fusillade followed a July 25 decision by a court in in the western province of Izmir to move Brunson into house arrest. Brunson, who protests his innocence, has languished in prison for the past 22 months over his alleged links to Kurdish militants and a Muslim religious group that is blamed by Turkish authorities for plotting the failed July 2016 coup.

On July 18, the court rejected his defense lawyers’ pleas to let him go and remanded Brunson in custody pending a fourth hearing on Oct. 12. The court, citing Brunson’s declining health, was likely prompted to change tack by a raft of sanctions Congress has vowed to ram through over the continued detention of Brunson and other US nationals and Turkish citizens who work for US diplomatic missions in Turkey.

Congress charges Ankara is holding them as political hostages in a brazen bid to wrest concessions on a number of thorny issues that have poisoned ties. Among the most pressing is a multibillion-dollar fine that will likely be imposed on state-owned lender Halkbank for evading US sanctions on Iran.

Sanctions in the legislative pipeline include holding up delivery of F-35 fighter jets to Turkey until the Pentagon provides information on whether Ankara will scrap its controversial deal to buy S-400 missiles from Russia. It has 90 days to submit its report. The other demand is that US nationals and consulate staff being held on specious terror charges be freed. Otherwise, Congress wants the administration to block financing for Turkey’s troubled economy from global lending institutions such as the International Monetary Fund and the World Bank.

“The intent, as I understand it, is to signal to Turkey that there is an off-ramp and that movement on the two issues, the S-400 and Brunson, would signal a Turkish desire to reset the relationship,” said Aaron Stein, a senior fellow at the Atlantic Council who is an expert on Turkey and military affairs. “The ball is really in Ankara’s court on this,” Stein told Al-Monitor. “I am afraid this message isn’t making it through the noise.” In short, Stein noted Washington had expected Erdogan to become more accommodating after the June 24 elections. It miscalculated.

Indeed, Trump’s words clearly suggest that placing Brunson under house arrest fell far short of appeasing the administration. Washington may have thought it had a deal with Ankara and that Brunson was going to be freed and allowed to fly home after his third hearing on July 18.

The contours of such a deal as described by prominent Turkish columnist Asli Aydintasbas allegedly involved a swap between Brunson and Mehmet Hakan Atilla, the Turkish banker who was sentenced by a Manhattan court to 32 months in prison for his role in busting sanctions on Iran. According to the deal, Atilla would serve out the rest of his term in Turkey. Aydintasbas asserted in a July 26 column for the opposition daily Cumhuriyet that “there was nobody left who hadn’t heard about this deal.”

Any hypothetical clemency for Atilla might be politically explosive given Trump’s business interests in Turkey and the entanglement of his former national security adviser Michael Flynn in allegedly dodgy dealings with Turkish officials, including a meeting with Cavusoglu and then-Energy Minister Berat Albayrak, first reported by the Wall Street Journal. Albayrak is Erdogan’s son-in-law and the current economy minister. The talks in Manhattan allegedly involved conversations about abducting Fethullah Gulen, the Pennsylvania-based preacher accused of plotting the abortive putsch.

Aykan Erdemir, a senior fellow at the Foundation for Defense of Democracies who has been closely monitoring Brunson’s case, aired skepticism about any prisoner exchange. He told Al-Monitor, “I highly doubt that Washington would agree to swap Pastor Brunson with any convicted felon in the United States, especially with an individual guilty of conspiracy to evade Iran sanctions.” Erdemir continued, “Such a dirty deal would not only be a de facto admission of the moral equivalency between an innocent pastor and a sanctions buster, but also lend legitimacy to the ludicrous accusations in the Brunson indictment.”