How did Egypt benefit from Cairo Water Week?

The Egyptian government promoted through Cairo Water Week its concerns over water-related issues to international parties that attended this first-of-its kind event for Egypt. 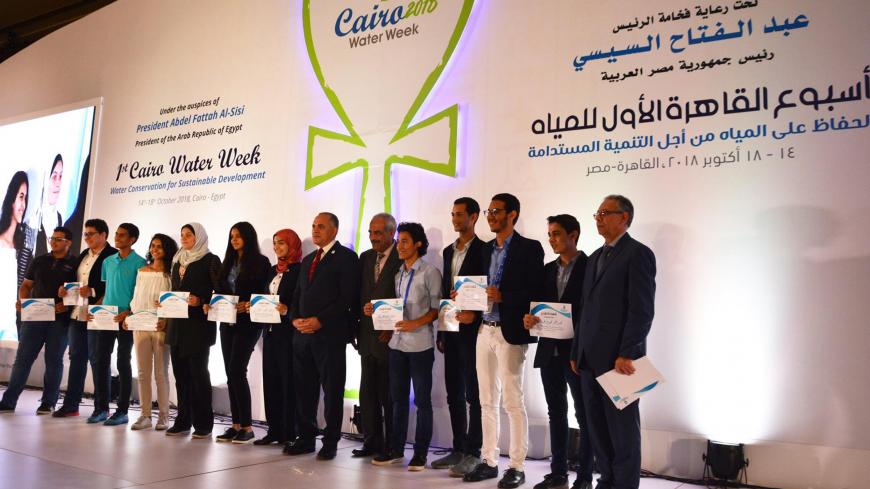 The event was an important milestone for the Egyptian government, which succeeded in raising its concerns about water issues, such as water scarcity and the dispute over the Grand Ethiopian Renaissance Dam (GERD).

Experts from the Ministry of Water Resources and Irrigation addressed the risks of climate change and called for financial and technical support for programs to counter those risks in Egypt. In addition, they warned against social risks and political repercussions of the ongoing disputes with the eastern Nile Basin countries over the GERD case. The government also talked about coordination projects with Nile Basin countries under Egyptian auspices, such as the navigational line to connect Lake Victoria to the Mediterranean.

No specific programs were announced during the event, but some parties, including the UN and EU, pledged to continue working with the Egyptian government to counter the challenges the country faces, such as enhancing water management programs.

In his speech during the closing session of Cairo Water Week, EU Ambassador to Egypt Ivan Surkos stressed the EU’s support to Egypt, especially in water-related issues.

Yosri Khafaga, spokesman for the Ministry of Water Resources and Irrigation, told Al-Monitor, “The Ministry of Irrigation considers Cairo Water Week a promotion of its rhetoric on developing water resources and on the requirements to implement sustainable development plans and provide support through partnerships with foreign organizations. We expect increasing partnerships with water and environment organizations.”

Khafaga added, “The Ministry of Irrigation sent out several messages focusing on the importance of rational [water] management between the countries sharing basins of international rivers and warning against monopolized measures and decisions that might harm other countries’ interests. The ministry also highlighted Egypt’s experience in rationalized use of water and in integrated water resources management to face scarcity and resolve local disputes over water between farmers.”

During the conference opening, Prime Minister Mustafa Madbouly said, “Water is one of the most important issues of Egypt’s national security. Most development plans are linked to [ensure] abundance of water resources. The government has made a plan of action [during the event] based on three themes to achieve national security, including developing water resources from different sources, rationalizing water use and supporting cooperation with neighboring countries to optimize benefits.”

Minister of Water Resources and Irrigation Mohamed Abdel Ati tackled several challenges that threaten the political, economic and social levels if local and international efforts and solutions are not implemented. He said during the opening session, “Any change in Egypt’s water quota would have negative repercussions on millions of Egyptians who work in agriculture.”

Ati warned against possible environmental disasters due to climate change, saying, “The Delta lands in Egypt are at great risk, basically because of the sea level rise. It caused seawater and groundwater — which is the main source of freshwater for locals — intrusion.”

The conference focused on the debate over the GERD and the technical disputes over the ripples of the dam storage and operation by Ethiopia, and on ways to find impartial and international solutions. The results of international studies were shown during one of the sessions, revealing the danger of unilateral decisions that Ethiopia might take to fill and operate the dam reservoir, as well as the negative impact on Egyptian water interests.

One of the international studies was conducted by Karel Heynert, a water management expert in the Dutch government, and Deltares Consultancy. The latter withdrew its participation in the technical studies on the GERD impact.

Heynert said in his study that Egypt was affected socially and economically and that agricultural production could drop by $42 billion during the storage stage. Discussing the results of the study in Cairo, he said, “Both the Renaissance Dam and the Aswan Dam might constitute a huge problem for the Nile River in the absence of joint management [between the concerned countries]. Filling the Renaissance Dam for several years would have negative repercussions on the Aswan Dam during the drought period, especially if it was operated without coordination with the downstream countries.”

Since June 2013, tripartite negotiations on the GERD impacts on downstream countries, mainly Egypt and Sudan, kicked off on the political, security and technical levels. Back then, a report from the international panel of experts on the GERD called for conducting two studies to assess the hydraulic, environmental and economical impacts of the dam on Egypt and Sudan. But negotiations have faced many hurdles since 2013. Despite the leaders' attempts to facilitate the studies in order to agree on rules for the filling and operation processes of the dam, technical disputes continue.

Yasir Mohamed, director of the Hydraulics Research Center in Sudan, told Al-Monitor, “Organizing the session [on the GERD impact] during Cairo Water Week and displaying the results of scientific research are a major step. This is the first time we have a neutral [objective] platform where international studies and research on the sensitive GERD issue are displayed, as well the scenarios of filling it that remain a point of technical contention between Egypt, Sudan and Ethiopia.”

In addition to the general discussions during Cairo Water Week, bilateral talks were held between Egyptian officials, including Madbouly and Ati, and representatives of international organizations.

Loic Fauchon, president of the World Water Council, told Al-Monitor, “I discussed the situation of the Nile Basin with the prime minister and the minister of water, and I delved into the ongoing dialogue regarding Egyptian President Abdel Fattah al-Sisi’s initiatives to solve the disputes with Ethiopia and Sudan.”

Fauchon said he could not reveal more information on these initiatives until the three countries agree on them. “We have expertise to help in mediation between the Nile Basin countries to facilitate the dialogue. We will carry out this mission, if they ask for it,” he said.

He added, “One conference cannot result in specific outcomes, but we are moving step by step. The discussions guarantee that water scarcity will be at the top of priorities, and that pressure will be put on politicians, decision-makers and political forces. Most African countries do not prioritize water although their water security suffers.”