Behind bars since the age of 25, 57-year-old Palestinian writer Walid Daqqa sends out a message of hope in a book for children of parents caught in prison or the wider occupied territories. 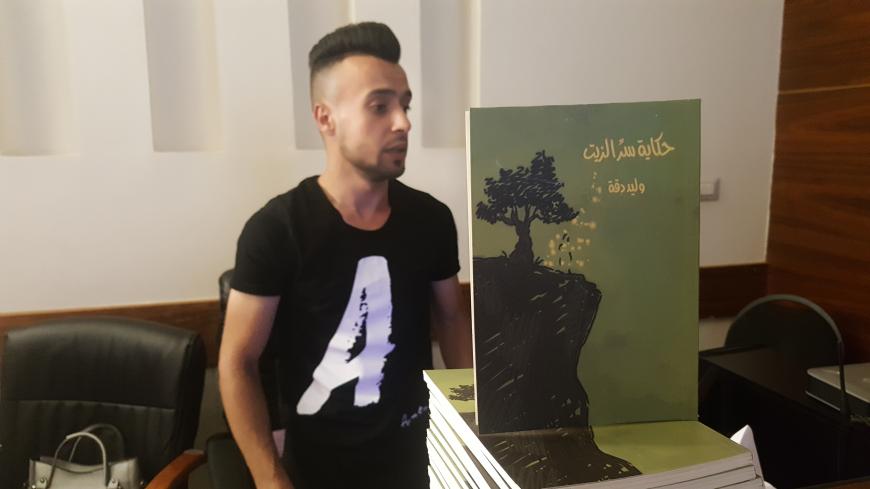 RAMALLAH, West Bank — “The Tale of the Secret of Oil,” a new book for young readers, was launched this September at the Mahmoud Darwish museum in Ramallah, but unlike most book launches, the author, Walid Daqqa, was conspicuously absent. He wrote the book in prison, where he has been since 1986.

"The Tale of the Secret of Oil” is Daqqa's first novel for children and adolescents, though he has written others in the genre known as prison literature. Published by the Tamer Institute for Community Education, it narrates the story of 12-year-old Jude, who was conceived with his father’s sperm smuggled out of prison.

The story begins as Jude prepares to see his father for the first time but receives news that his visit has been canceled due to security concerns. Heartbroken, the boy goes for a walk in the countryside, where he talks with different animals and plants: a rabbit called Samour, a bird named Abu Risha, Khanfour the cat, Abu Na the dog and finally a 1,500-year-old olive tree called Um Rumi. They all listen to his pain over the canceled visit and, in turn, tell him of their suffering under the occupation and their longing for freedom.

Um Rumi tells Jude that the Israeli authorities threatened to uproot and move her from her home in the West Bank to the city of Afula, in northern Israel. She then tells Jude a secret in the form of her sacred oil. When rubbed on his skin, the oil makes Jude invisible, helping him access his father in his cell. His father fears he is losing his mind on hearing a child’s voice utter the words, “I am your son, Jude."

The Sept. 3 launch, which Al-Monitor attended, was hosted by writer and youth literature specialist Ahlam Basharat, with comments from poet and head of the Department of Philosophy and Cultural Studies at Birzeit University Abdul Rahim al-Sheikh.

Basharat said that the novel explains the suffering of the children of Palestinian prisoners, who were often deprived of visiting their loved ones and grow up without seeing their father or mother. “Other children detained in prisons have their childhoods ripped away from them,” he said, adding that at the end of the story, Daqqa ties the idea of a literal prison to a larger one where Palestinians in the territories live under siege.

Basharat added, “Daqqa has succeeded in creating a story of freedom and hope within prison through the search of his main character, Jude, who seeks freedom. This reflects the attitude of the writer, who has spent 32 years in prison but believes in hope, not in despair and frustration. This is shown in the dialogue of the imprisoned father, as he urges his son to be committed to ethics, education and freedom.”

Daqqa, who is from the town of Baqa al-Gharbiyye inside the Green Line, is planning a sequel, “The Tale of the Secret of the Sword,” which will address the subject of refugees and return. His other books, all penned while in prison, include “Fusion of Consciousness” and “A Parallel Time." The latter, which addresses the psychology of prisoners, was adapted into a play and staged at Haifa’s al-Midan Theatre.

At the age of 57, Daqqa is one of the oldest prisoners in the Israeli jails. He was arrested at the age of 25 in 1986. He was sentenced to life for setting up a military cell that kidnapped and killed an Israeli soldier in 1984. In 1999, he married journalist Sanaa Salameh while in prison. In rare permission, the Israeli authorities allowed the wedding to take place and for photos and videos during the small ceremony. After the wedding, however, he was not allowed to spend time with his wife. In an open letter from prison, published by the local media in 2011, he expressed his longing for a child “yet to be born,” saying he’d name him Milad.

The writer has also devoted his time to education. He completed bachelor's and master's degrees in political science and is currently working on his doctorate.

“The book is aimed at youth, but its connotations are large. At its core, it speaks about the essential experience of men in prison, and of children born in prison or to detained parents who are denied visits to their families,” said Sheikh at the book launch. “The novel exemplifies steadfastness and determination, underlining that a Palestinian hero’s work is not done as long as the Israeli occupation continues. Embodying this is Jude, who is born from sperm smuggled out of prison.”

The symbolism in the 95-page novel refers to Jesus, the son of Mary, and the myth that he was able to heal people's wounds with oil.

The imprisoned author could not be reached for comment, but the book's prelude explains his goal in writing it: “I write until I am freed from prison, with the hope of freeing the prison from me.” This is followed with a dedication: “To Jude, that he may live his childhood, to all the children who have become adults before their time and to all the adults who have been deprived of a taste of childhood by prison.”