Palestinian detainees in Israeli prisons go to great lengths to pass on their artistic work to the outside, with some prisoners' work gaining widespread attention. 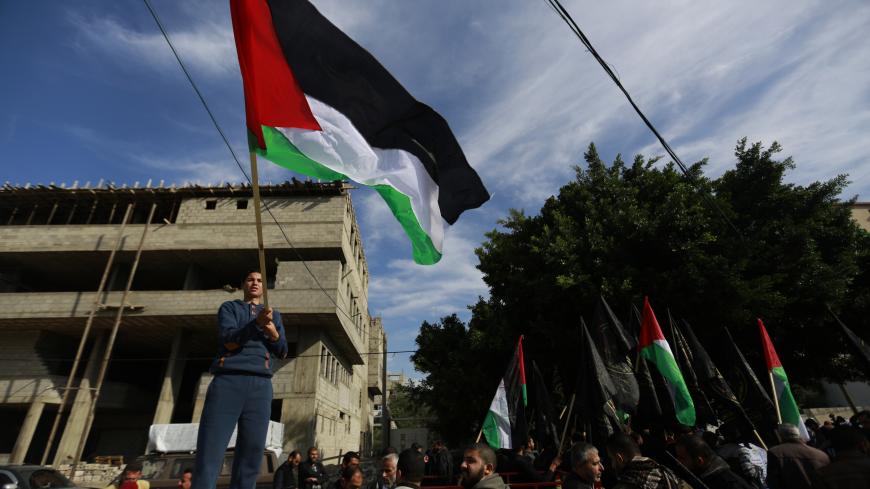 GAZA STRIP — During the 22 years he spent in Beersheba prison, writer Shaaban Hassouna managed to draft five novels, which he sneaked out in capsules for his family to print. One of his novels, “Shade of a Black Cloud,” received critical and local acclaim.

Capsules are often used to conceal and transport a prisoner's writings to the outside. The prisoner will write on transparent, thin paper and then fold it and conceal it within a drug-like capsule, which he will then secretly pass to a family member during a visit. The family member then swallows the capsule, and the writings are later recovered from excreted feces.

Each novel has its own adventure sneaking out of prison. Hassouna said that he has also passed along his notebooks in food boxes. Hassouna, who was released from prison in 2011, told Al-Monitor that he started writing at an early age, though he only excelled at it when he was imprisoned at age 20.

“In confinement, several literary activities take place, and I attended them persistently. I love Arabic language and literature, and I started to draft press statements [for people inside the prison],” he said.

His parents and siblings paid for the publication of all his stories at Al-Yaziji publishers in Gaza. Nonetheless, none of the official political parties were willing to sponsor or publish his work.

Hassouna no longer has the same amount of free time as he did in prison. He is currently busy with his organization, Dohat al-Ebdaa, which produces artistic and theatrical works inspired by the lives of detainees in the Israeli occupation’s prisons.

The slow passage of time during long years of detention can give individuals the space to write or produce handicrafts. The Ministry of Detainees in Gaza City permanently houses some of these works, which, now covered in dust, are stored in a dark room where it is often difficult to distinguish the detainees' unpublished manuscripts.

Al-Monitor saw the manuscripts at the ministry, including the notebook of a female detainee from Ashkelon prison, its cover embroidered in Palestinian stitching. Inside, she wrote, “O God, life is closing in on me, despite its vastness. I feel alienated and stuck in this world. Take me to you, and welcome me in your paradise.”

Perhaps this anonymous detainee had written her thoughts in a moment of despair, yet other books express more hope, like former detainee Raafat Hamdouni's “The Dream Will Live On” ("Lan Yamout al-Houlm"), published at the author's own expense. It tackles themes of love, freedom and resistance.

Islam Abdo, media chief at the Ministry of Detainees, said that the ministry’s financial capacities are limited, so they are unable to publish the hundreds of manuscripts held by the ministry and detainees' families. The Israel Prison Service does not permit prisoners' writings to leave prison.

Abdo told Al-Monitor, “Several of these manuscripts have been damaged due to lack of care, although they are all important to show the detainees’ experience in the occupation’s prisons in a literary and humanitarian style.” Abdo said that political parties, factions and organizations involved in detainee affairs have attempted to publish such works.

“What distinguishes prison literature written within the confines of prison is that it is realistic and direct and talks candidly amid deprivation. The detainee expresses his feelings and memories more honestly than a writer enjoying freedom,” he said.

Shemala said that this type of literature has become rare. He compared prisons to living beings that change with time. Some historical eras give birth to prolific creative writers, while others are devoid of such talent.

During the decade he spent in prison, he distributed a weekly newsletter and supervised cultural activities, such as summarizing books and novels.

Another novel written by a detainee, ”Brave Hassan, A Worthy Experience,” garnered local popularity. It recounts the story of a resistance fighter, arrested by the Israelis and put in administrative detention, who refuses to confess, in the hope of not being sentenced. However, the Israel Security Agency (Shabak) conducts a fake trial and puts Hassan in prison afterward. Believing that he has already been sentenced, Hassan begins to reveal his secrets to his fellow detainees who are also involved in the resistance. He ultimately discovers that his fellow detainees are actually secret Shabak agents, and he is sentenced to life in prison.

Bilal Abu Daqqa, a former detainee, wrote this dense novel during his first five years in Nafha prison. He sent the novel, paragraph by paragraph, in letters to his wife Mouminah al-Raqab once a month. His wife printed the book, and a research center published and sold more than 20,000 copies.

Daqqa, who served nine years in prison, told Al-Monitor, “While I was in jail, I wrote poems, but I realized that the resistance men outside jail should take heed of the Shabak’s investigation methods in order not to fall in their trap if they were arrested. For this reason, I wrote the book, and I discovered that the best way to transmit an experience is through telling it.”

Daqqa said that many people see detainees as weaklings when they confess, but they have no idea how far the Shabak is willing to go in its manipulation and deceit. Daqqa said that he planned to write a second part of the novel.

Manuscripts covered in dust and darkness, detainees wasting away in prison and a ministry incapable of paying its employees’ salaries — such is the situation. How can literature possibly have a place amid this mess? One verse of poetry that makes its way out of a prison cell and into the light is enough to give people a ray of hope.