Netanyahu masters another show-and-tell at the UNGA

Prime Minister Benjamin Netanyahu showed in a speech at the UN General Assembly meeting that he continues to lead a multiple-front campaign against Iran, and with intense squabbling among the leadership in Tehran, Israeli leaders sense that victory is near and possible. 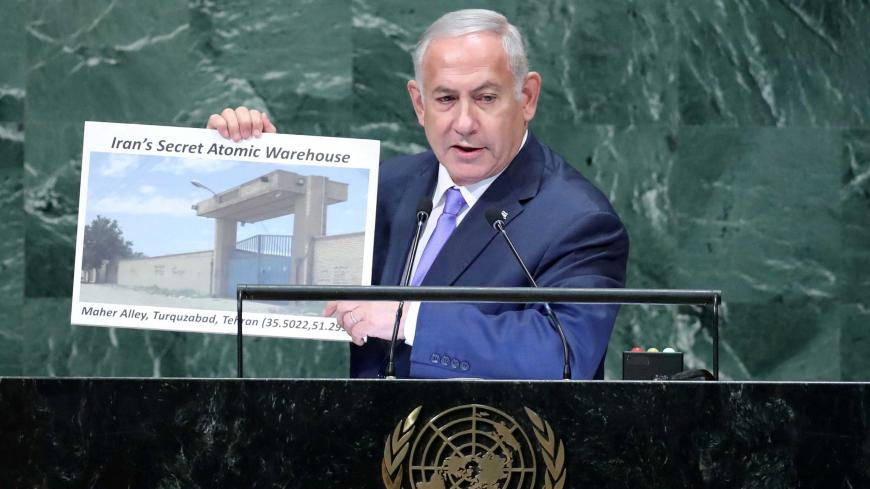 No Israeli prime minister has made such abundant, flagrant and public use of intelligence coups scored by Mossad and Military Intelligence as Benjamin Netanyahu has. He followed his viral Iranian nuclear files performance of April 30, using a simulated backdrop of file cabinets to reveal Mossad’s success in removing an Iranian nuclear archive from Tehran to Tel Aviv, with an appearance before the UN General Assembly on Sept. 27. As expected, it was another chapter in Netanyahu’s harsh indictment of the Islamic Republic.

Netanyahu proved, once again, that he is an oratorical genius and an audiovisual wizard when he held up photographs and maps of what he described as a secret Iranian nuclear facility in Tehran and three long-range missile bases that Iran maintains, courtesy of Hezbollah, adjacent to Beirut’s international airport.

Netanyahu was undeterred by a US intelligence source who told Reuters that the prime minister's comments were “somewhat misleading.” “We have known about this facility for some time, and it’s full of file cabinets and paper, not aluminum tubes for centrifuges,” the source said. That US media sidelined his speech in favor of the dramatic Senate confirmation hearing for Judge Brett Kavanaugh did not terribly upset Netanyahu. The Israeli leader took the podium in New York, but his target audience was almost 6,000 miles away, watching television at prime time in Israel.

Netanyahu's aides' success in moving his scheduled speech forward, to the ideal hour of 8:00 p.m. Israel time, the start of the evening news, provided him with the effect he sought to create. It was further affirmation of his standing as Israel’s supreme leader and a display of the noose he is tightening around the neck of the Iranian regime, enthusiastically cheered on by the White House.

The original plan called for this reveal to be a gimmick pulled off during Netanyahu’s next election campaign, the coup de grace against his enemies in his quest for re-election. In June, Netanyahu had planned to call early elections for sometime in early October 2018, a week or two after his General Assembly appearance. Had this plan materialized, the speech would have achieved the standing of his appearance in March 2015 before a joint session of Congress in Washington to warn about the impending nuclear deal with Iran, two weeks prior to elections later that month. This did not happen. Netanyahu is currently considering calling early elections for February or March 2019. By then, the effect of his UN speech will have dissipated. He will need a new one. Netanyahu has assembled a long line of impressive victories in recent months in his war against Iran. Had it not been for the downing of a Russian reconnaissance plane on Sept. 17 by Syrian air defenses, for which Russia blamed Israel despite Israeli denials, it could have been the culmination of Netanyahu’s achievements.

A senior military source told Al-Monitor that significant success has resulted from a plan presented two years ago by the Israel Defense Forces (IDF), and approved by the Israeli Security Cabinet, to prevent Iran’s entrenchment in Syria and to stop Syria from turning into a second Lebanon. The IDF is convinced that Iran had planned to deploy some 100,000 troops in Syria by the end of 2018, along with air and naval bases and intelligence and missile facilities. In addition, the Iranians were turning Hezbollah’s arsenal of rockets and missiles into precision weapons capable in a future war of effectively crippling the IDF’s capacity (mostly that of its air force and intelligence).

It seems at the moment that this scenario has not for the most part materialized. Declarations by Hezbollah Secretary-General Hassan Nasrallah notwithstanding, the group is estimated to have very few precision missiles capable of reaching Israel, and only some 10,000 Shiite militiamen are deployed in Syria, but nowhere near the border with Israel. It’s really too bad that the Russian Ilyushin went down in Syria amid all this.

Israel’s defense agencies had initially gone along, more or less, with the 2015 Iran nuclear agreement, but in recent months, this approach has been replaced by a sense of euphoria given the results of the US withdrawal from the deal and the renewed sanctions Washington imposed on Tehran. Israeli intelligence has identified an existential sense of doom in Iran and a vicious leadership battle pitting conservatives led by the supreme leader, Ayatollah Ali Khamenei, and Islamic Revolutionary Guard Corps commander Qasem Soleimani against President Hassan Rouhani and his people. The latter, more moderate camp believes it’s time to pack up fomenting the revolution throughout the Middle East and to instead save Iran's economy. Hezbollah as well, according to Israeli defense sources, is in trouble, with a major budget deficit and internal unrest. All of the above has infused Israel with the sense that victory is near and possible.

This is a dangerous sentiment. For many in Israel, it is reminiscent of the euphoric, power drunk and arrogant climate on the eve of the 1973 Yom Kippur War. In addition, Netanyahu’s frequent use of Israeli intelligence data, of Mossad’s achievements and of other secret material is generating unease. This feeling persists even though Netanyahu coordinated with the IDF on the presentation at the United Nations. After the speech, the military issued additional photos to buttress Netanyahu’s claims.

“The prime minister is leading a pincer movement against Iran,” a defense source told Al-Monitor, speaking on the condition of anonymity. “Netanyahu’s speech links the Iranian nuclear program to its entrenchment in Syria. Everything leads to the same place, to one goal, to one revolution. This has become clearly visible now and explains the link between rockets and missiles in Syria and Lebanon, missiles and rockets in Yemen, and Iranian centrifuges in Tehran.”

Mossad chief Yossi Cohen is fully on board for Netanyahu’s public diplomacy campaign against Iran. The latest series of Mossad achievements has turned Cohen into one of the most familiar and admired intelligence figures in the world. An articulate and charismatic speaker with a mastery of several languages, Cohen provides Netanyahu with a significant boost. He meets often with diplomats and officials in Europe and Asia to illustrate the scope of the Iranian threat. His abilities in this regard are almost as good as Netanyahu’s. Were it not for the law that imposes a three-year “chilling” period on Cohen before he can go into politics after leaving office, he could be marked as a potential successor to the prime minister.