The Iranian government is one step closer to eradicating discrimination against those deprived of higher education, but a cloud of uncertainty still hovers over the fate of Bahais. 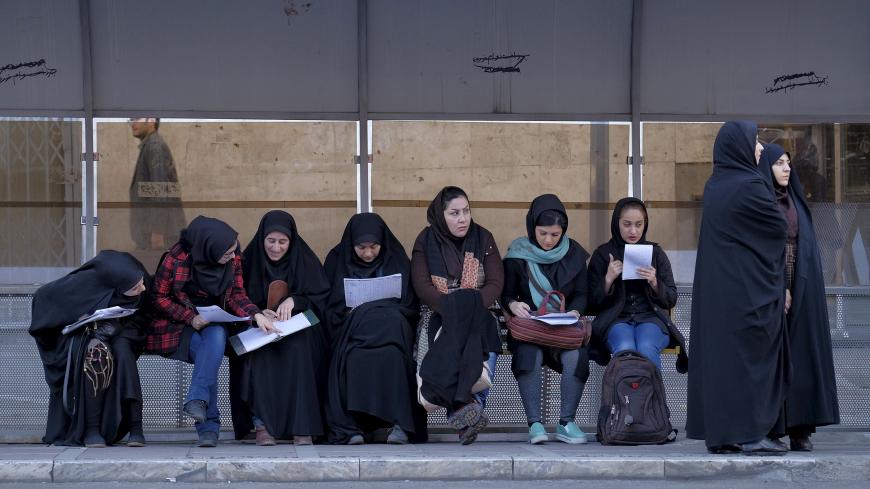 Iranian students study as they wait for a bus in central Tehran, Jan. 16, 2016. - REUTERS/Raheb Homavandi/TIMA

The government of President Hassan Rouhani has approved a bill on the right to further education and tabled it to the Iranian parliament. According to the Reformist daily Etemad, if ratified, the bill could decide the fate of so-called "starred students." The term refers to university students barred from pursuing degrees for allegedly engaging in political activities deemed illegal and against national security. These activities could range from posting on social media to attending protests and leading student unions. Once marked as starred, these students are officially denied the right to move up the educational ladder despite having passed highly competitive entrance exams.

The widespread use of the practice brought the issue to greater light during the past two presidential elections in Iran, where candidates from both conservative and Reformist camps tried to appease the public by criticizing the policy.

Historian and university professor Gholamreza Zarifian described the practice as an oppressive measure that "after implementation turned into a political and social issue."

Now, based on what has been approved by the Rouhani Cabinet, no one should be deprived of continuing education for reasons other than "lacking educational qualifications." There are exceptions — namely with reference to "those convicted of organized crime, human trafficking, waging war against God and espionage."

"If passed, the bill will fully consolidate the basic right to education as enshrined in chapter 3 of the constitution," Rouhani's deputy for legal affairs Laya Joneidi told Etemad.

The official Iran daily hailed the Cabinet decision as a crucial step toward eliminating educational discrimination, "a policy pursued by the administration of prudence and moderation" — the slogan of Rouhani's government.

Interviewed by the same paper, Shahindokht Molaverdi — who serves as Rouhani's special assistant for citizenship rights — also welcomed the step, saying, "With the new measure, no student will be deprived of education."

But the key implication of the bill could be seen in the potential impact on Bahais, a faith that is outlawed by the Islamic Republic and whose followers are subjected to severe persecution. For decades, members of the Bahai community who openly endorse the faith have been denied higher education. That has, in consequence, forced a large number of them to seek education abroad.

Outspoken Reformist parliament member Mahmoud Sadeghi, a lawyer himself, was quick to react to the Cabinet measure. "Seemingly good news but bad news in reality," he tweeted. Sadeghi added, "It is an unprofessional amendment, which turns the law against itself. Depriving people of the right to education on the basis of charges even for serious offenses violates the constitution."

Sadeghi was notably challenged by one user, who tweeted, "How about Bahais whose right to continue education was denied by the Supreme Council of the Cultural Revolution 28 years ago?"

"This is also in breach of the right to education and is against the constitution," Sadeghi replied.

The Rouhani Cabinet measure has yet to be ratified by the parliament and the conservative supervising body, the Guardian Council. Even if it overcomes the two hurdles, the original proposal has left out the fate of Bahais and has made no effort to abolish the old law approved by the Supreme Council of the Cultural Revolution, offering little promise for Bahais who have long complained of educational oppression among other forms of discrimination.