The international community sounds ever more frantic begging the Syrian regime to stop its deadly advance on Idlib, the rebel-held province that will likely produce millions more refugees as it is retaken by the government's forces. 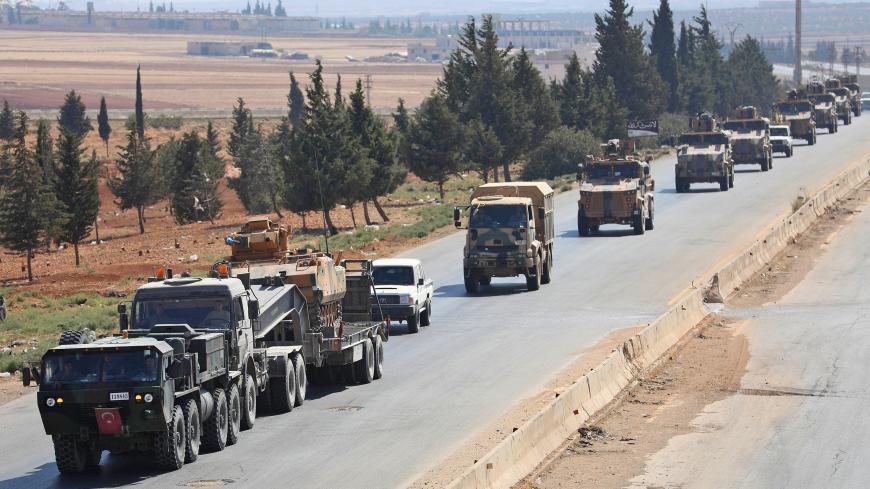 Turkish forces are seen in a convoy on a main highway between Damascus and Aleppo, near the town of Saraqib in Syria's northern Idlib province, Aug. 29, 2018 - OMAR HAJ KADOUR/AFP/Getty Images

“Do you know that not only birds fly in the Syrian sky? There are a lot of huge metal bodies sending death presents to us from the sky every day.” The grim image painted by Housam Abdoulgani, an award-winning young Syrian documentary director, in an essay titled “112 Questions for Humanity about Syria” looms over Idlib, the rebel-held province that Syrian government forces are gearing up to attack.

The United Nations, the pope, even US President Donald Trump have weighed in with appeals against a bloodbath. Turkey’s President Recep Tayyip Erdogan is begging Moscow and Tehran for more time to get as many members of al-Qaeda-linked Hayat Tahrir al-Sham (HTS) to give up their fight and effectively surrender.

A critical meeting between Erdogan, Russia’s Vladimir Putin and Iran’s Hassan Rouhani in Tehran on Sept. 7 will likely reveal how much time, if any, Turkey has left to rein in the jihadis who once freely moved men and weapons across the Syrian-Turkish border.

So far, the calls are falling on deaf ears. HTS leaders have vowed to fight to the death. Kremlin spokesman Dmitry Peskov said the Syrian Arab Army was preparing to “clear a cradle of terrorism” in Idlib. The Syrian Observatory for Human Rights, a UK-based monitoring group, reported today that after a three-week lull, Russian jets had carried out 30 raids on about 16 rebel-held areas in western Idlib, the mountains of Latakia province and the Sahl al-Ghab plain.

Millions of lives are at risk and a fresh wave of refugees may be unleashed should the regime and Russia press ahead with the cruel cocktail of air strikes, besiegement and the widely alleged use of chemical agents that have become signature modus operandi in wresting back territory from the rebels, humanitarian groups warn.

Their most likely destination would be Turkey, which since the start of Syria’s devastating conflict in 2011 has let in over 3.5 million Syrians. The welcome has worn out as the Turkish economy hits its worst turbulence in recent years. The Turkish lira has shed nearly 40% of its value against the dollar and inflation has jumped to an annual 17%. As small and medium-sized businesses collapse under the weight of unserviceable debt, unemployment is also rising, focusing anger on Syrians, who are perceived as stealing Turkish jobs when in fact they are being exploited for cheap labor.

Tellingly, the hashtag “SuriyelilerDefolsun” or “Syrians go home” had trended on Turkish Twitter for nearly 48 hours as of today. A typical post read, “I don’t want to feed you with my taxes.” It’s unclear whether the posts were from bots aiming to embarrass the government over its open-door policy, as some pro-government journalists claimed. If so, the alleged provocateurs were preaching to the converted: A recent study by Istanbul’s Bilgi University sponsored by The German Marshall Fund revealed that the one topic Turkey’s deeply polarized people agree on is the need for Syrians to go home. Some 83% of respondents who vote for Erodgan’s Justice and Development Party (AKP) said they believed the Syrians should be told to leave, as did some 92% of supporters of the main opposition Republican People’s Party.

Rising hostility toward Syrians is cited by analysts as one reason a substantial number of AKP voters defected to the far-right Nationalist Action Party (MHP) in the June 24 parliamentary polls. Around 88% of MHP voters polled by Bilgi were in favor of booting Syrians out.

Diba Nigar Goksel, the Turkey director for the International Crisis Group (ICG) who has conducted extensive field research on Syrian refugees, said the well of resentment runs deep. Goksel explained to Al-Monitor, “In provinces across the country where Syrians are densely settled, Turkish citizens are experiencing the following real problems: overcrowded classrooms and hospitals, municipalities not being able to keep up with garbage collection and public transport needs as well as rising rent prices and competition in the informal job market.”

Goksel went on, “The sense of public spaces becoming more unsafe is fed by the tendency of criminal networks to use Syrian men and women for theft, prostitution drug sales and the like, and Syrians are blamed for disruption of public order and safety.”

Against this background, Turkey can ill afford to take in further refugees, who would most likely include jihadis. Yet its options are limited. In its report “Saving Idlib from Destruction,” the ICG observed, “Turkey, too, would like to see the end of jihadist dominance in Idlib. If Turkey tries to attack Idlib’s jihadists head on, however, it risks chaos on its border and jihadist reprisals in Turkish cities.” The alternative, a regime offensive that now seems inevitable, would be just as horrific and costly and portend regime moves against Turkish-held territory in Afrin and the Euphrates Shield zone. This is why Turkey is demanding time for its thus far unsuccessful effort to rally rebel “moderates” against the non-Syrian hard core within HTS and its allies to succeed.

The European Union, which has forked out billions of euros to Turkey to effectively serve as a holding pen for the millions of refugees who would otherwise try to make their way to Europe, is also feeling the heat. The EU’s concern about Turkey’s faltering finances likely stems mainly from fears that instability in Turkey would imperil the refugee deal and that Idlib may prove a tipping point. Syria is expected to figure prominently when Erdogan meets with German Chancellor Angela Merkel in Berlin during an official visit to the German capital that is due to take place Sept. 28-29.

Amid all the diplomatic jockeying, the suffering of the Syrians continues unabated and despite creeping compassion fatigue, “the media has kept pace with the callous reality of the war in Syria,” said Sarah Leah Whitson, the executive director of the Middle East and North Africa division of Human Rights Watch.

“What matters little to those in power are the millions of Syrians whose lives have been destroyed, country is in shambles, and visions for a free and democratic Syria snuffed out; what matters most to those in power, and so the media scribes dutifully report, is the petty scramble for control and influence over what remains,” Whitson told Al-Monitor via email.

A searing essay chronicling the misery of the Syrians and their courage by Synaps, a Beirut-based group which draws on a wide network of citizen journalists, noted, “Syrians have shown relentless ingenuity in adapting to every stage of a horrendous conflict, salvaging remnants of dignity, solidarity and vitality amid nightmarish circumstances.”