With the Donald Trump administration set to reimpose Iran sanctions after exiting the nuclear deal, it’s looking less and less likely the rest of the world can salvage the accord. 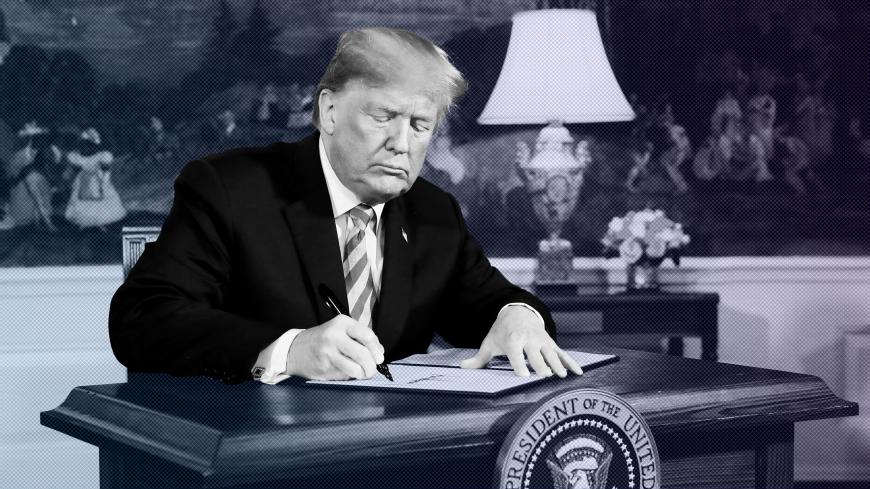 US President Donald Trump signs a proclamation declaring his intention to withdraw from the Iran nuclear agreement in the Diplomatic Room at the White House, Washington, May 8, 2018. - REUTERS/Jonathan Ernst

The United States is set on Aug. 6 to reimpose a first batch of Iran sanctions lifted under the 2015 nuclear deal following President Donald Trump’s withdrawal from the accord.

The upcoming sanctions target Iran’s automotive, precious metal, steel and aluminum sectors as well as rial transactions and civilian aircraft sales. While relatively minor compared with the sweeping oil sanctions due to resume in November, they could still put another dent in Iran’s strained economy and create new urgency on Tehran to solidify business ties with other countries.

“It really boils down to: Is Iran able to sustain enough commerce to stay out of a recession?” said Jarrett Blanc, who coordinated oversight of the nuclear deal for President Barack Obama’s State Department.

Prior to the nuclear deal, US and international sanctions had helped drive Iran into a depression. While the economy has improved since then, Tehran has been rattled by months of protests, fueled in large part by sundry economic grievances. Manufacturing sanctions in particular will only add to the pain.

“The automotive sector is one of Iran’s larger manufacturing sectors, and they had ambitions to become a significant export sector for the Iranian economy,” said Richard Nephew, a sanctions expert who helped negotiate the 2015 deal for the Obama administration. “It is also the source of a lot of jobs, which is part of the reason why the Iranians have prioritized it.”

The Aug. 6 sanctions also target civil aviation sales to Iran, effectively canceling any pending deals from US and European firms such as Boeing and Airbus. The nuclear deal explicitly allowed such sales so that Iran could replace and upgrade its aging airline fleet, which has been severely depleted from decades of US sanctions.

The looming sanctions deadline has pitted the United States and Iran in a global battle for influence.

After Trump withdrew from the deal in May, Iranian Foreign Minister Mohammad Javad Zarif embarked on a tour of the accord’s remaining participants — Britain, France, Germany, Russia and China –– in a bid to salvage the deal. Zarif has since visited multiple other countries seeking to shore up investment in Iran, while President Hassan Rouhani has also pressured Europe to keep the deal alive during his travels to Switzerland and Austria in July.

In an effort to maintain some business with Iran, the European Union is working on a so-called blocking regulation that would punish firms for complying with US sanctions. Major firms, however, have already made clear that they can’t afford to get shut out of US financial markets and have begun pulling out of Iran. These include Peugeot, General Electric, Boeing, Maersk, Siemens, Total Oil and Gas, and India’s Reliance refining complex. One Kazakh and two Russian steel companies have also ceased business ties with Iran.

“The EU’s attempt to do this may physically exist and may be enshrined in law, but it was always going to falter on whether or not the EU member states were prepared to use the retaliatory authorities that were embedded in it,” Nephew told Al-Monitor. “It’s a paper law and I think that’s what we’re going to see in practice here.”

Iran is also challenging the sanctions at the UN’s International Court of Justice under a decades-old treaty with the United States that predates the 1979 Islamic Revolution. The Trump administration calls the lawsuit, which observers agree is a long shot at best, as “baseless.”

Meanwhile, the nuclear deal’s US detractors have starkly warned Europe against resisting Trump and the Republican-led Congress. In July, Sen. Ted Cruz, R-Texas, led nine other Republican senators in a letter to the British, French and German ambassadors in Washington to urge them to “comply with all American sanctions, but also to emphasize we would consider it particularly troubling if you sought to evade or undermine American statutes.”

Last week, Rouhani argued that it fell squarely on Europe to save the deal. However, Blanc noted that Europe has successfully winnowed down Tehran’s expectations.

Rather than pressing for large business deals, conversations now revolve around “a much smaller set of questions about how much oil is Iran able to sell and what kind of financial relationships are they able to sustain with the outside world,” he said. “And they’re questions that have much more to do with Iran’s non-European trading partners … India, China and the rest, than they do with the Europeans.”

In particular, many analysts expect China to either maintain or increase its current oil imports from Iran even as Europe, Japan and South Korea cut theirs. The Trump administration has also recently indicated that it is open to granting sanctions exemptions for some countries to continue importing Iranian oil as long as they make some reductions.

Nephew estimates that Iran will be exporting “somewhere in the neighborhood of 1.3-1.5 million” barrels per day when oil sanctions go back into effect in November, down from 2.3 million when Trump withdrew from the deal in May.

“The reality is that Europe and the United States have a much closer economic integration for lots of good historical and business reasons,” Nephew told Al-Monitor. “You don’t see that as much in Russia, India, China and other places. And so their companies are going to have more flexibility and their banks are going to have more flexibility in parsing themselves out and deciding whether or not they want to do more business in Iran rather than the United States.”