US outsources Syria aid to Gulf

In an apparent win for the Donald Trump administration, Saudi Arabia and the United Arab Emirates have agreed to pick up the tab to stabilize Syria. 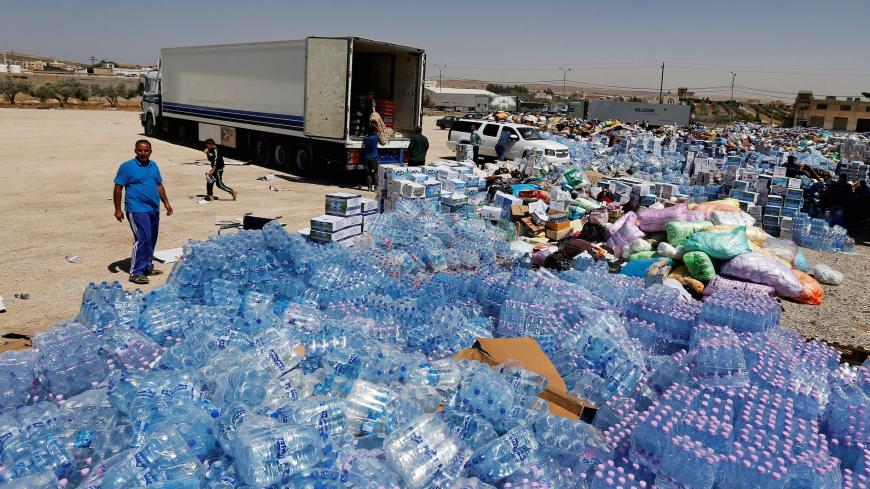 Humanitarian aid is prepared to be delivered to Syria, in the town of Ramtha, Jordan, July 2, 2018. - REUTERS/Muhammad Hamed

The Donald Trump administration is cutting $230 million in stabilization assistance for Syria after several Gulf states agreed to pick up the tab.

US State Department spokeswoman Heather Nauert said in a statement today that the United States “has elicited approximately $300 million in contributions and pledges from coalition partners to support critical stabilization and early recovery initiatives in areas liberated from [the Islamic State (IS)] in northeast Syria, including a generous contribution of $100 million by Saudi Arabia and $50 million pledged by the United Arab Emirates.”

Nauert then noted that the administration has consequently notified Congress today of its intent to reprogram the funds the United States had allocated for stabilization.

Trump, a frequent critic of US allies’ perceived refusal to pull their weight, has become increasingly skeptical of a prolonged US military presence in Syria. He first froze stabilization aid for Syria in March, leading to strong bipartisan pushback on Capitol Hill. Afterward, Secretary of State Mike Pompeo solicited donations from counter-IS coalition members during a June meeting in Morocco and on the sidelines of a NATO ministerial summit in July.

In addition to the Saudi and Emirati commitments, Kuwait, France, Germany, Italy, Denmark, Norway, the European Union, Australia and Taiwan have all made commitments.

“All these programs are remaining apace, and these contributions not only offset what the US government was going to spend but actually increase the amounts that we’re able to spend on the ground and make a difference to stabilize these areas going forward,” Brett McGurk, the special envoy for the counter-IS coalition, told reporters on a press call today.

Stabilization aid is intended to provide basic services that allow Syrian residents to return to their homes and some semblance of normal life after a devastating seven-year civil war.

A small handful of US aid workers have partnered with a contingent of US troops to provide demining services and set up irrigation canals as well as water pumps. According to McGurk, all 26 sectors of Raqqa, IS’ former capital, once again have access to safe drinking water and 150,000 Syrians have returned to the city.

McGurk vowed that the promised $300 million in funds would allow stabilization activities in Syria to continue “for the foreseeable future” and noted that they are “very hard contributions” rather than simply pledges. Saudi Arabia officially announced its $100 million contribution on Thursday.

“If the Saudis and Emiratis have actually transferred funds to American accounts, as opposed to their simply making pledges for a later date, gaining that funding is a real achievement for the Trump administration,” Robert Ford, the former US ambassador to Syria who is currently a fellow at Yale University and the Middle East Institute, told Al-Monitor.

However, it remains unclear whether the United States will maintain full financial and administrative control of all its current stabilization projects.

“Some of the contributions are being made directly through US mechanisms and others through other multilateral mechanisms with international organizations, but all of them are supporting critical stabilization initiatives,” said McGurk.

At the very least, Nauert promised that the United States will continue “needs-based humanitarian assistance to vulnerable Syrians,” support for the White Helmets rescue group, efforts to counter chemical weapons and funding for the UN’s independent mechanism “to hold the [Bashar al-Assad] regime accountable for serious crimes.”

But Democrats in Congress remain unimpressed.

“By ending US contributions to stabilization efforts in the most vulnerable communities recently liberated from the terrors of [IS], this message of US retreat and abandonment is an embarrassment,” Sen. Bob Menendez, D-N.J., the top Democrat on the Foreign Relations Committee, said in a statement.

“There is nothing normal about allowing others to backfill our commitments, thereby undermining our leadership,” a Democratic staffer on Capitol Hill told Al-Monitor. Unimpressed with McGurk’s promise that stabilization activities would continue, the staffer noted the need to “plan for future fiscal years” and exercise “proper oversight” on the projects.

Congress has also raised bipartisan alarm bells over a potential Trump administration bid to slash as much as $3 billion in foreign aid already allocated by Congress. Although the cuts are not yet finalized, they are widely expected to include the vast majority of economic assistance for the West Bank and Gaza, which has been under a lengthy State Department review since January.

Echoing its Syria aid strategy, the Trump administration is also trying to persuade the Gulf monarchies to invest hundreds of millions of dollars in economic assistance for Gaza as part of its Israeli-Palestinian peace plan, according to a June report in the Israeli daily Haaretz.

“We’re going with a tin cup to all of these Gulf countries and basically ask them to solve everything,” another congressional staffer told Al-Monitor.