The Donald Trump administration is doubling down on its decision to eliminate economic and stabilization aid for Syria amid its pending troop withdrawal. 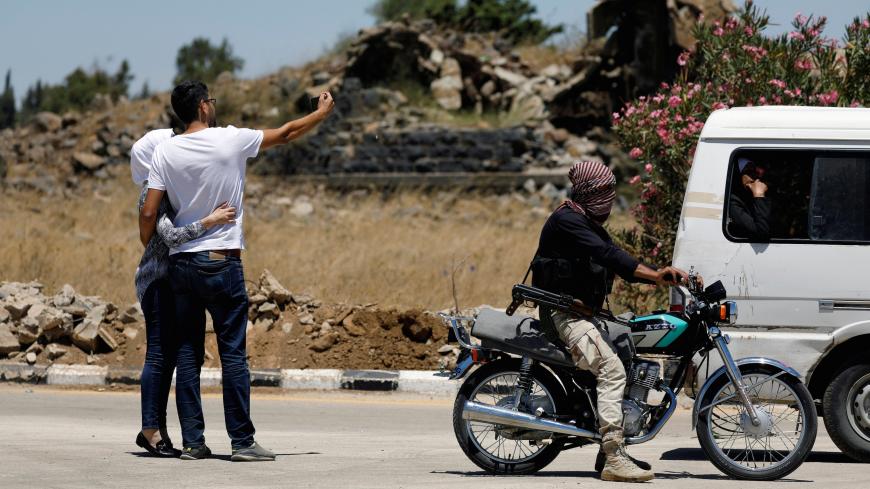 A rebel fighter rides on a motorbike as people take a selfie on a road in Quneitra, Syria, July 27, 2018. - REUTERS/Omar Sanadiki

The Donald Trump administration is seeking to eliminate economic and security aid to opposition-held Syria even as the United States gears up to significantly reduce its troop presence in the war-torn country.

The State Department budget request for fiscal year 2020 released today proposes zeroing out economic support funds for Syria as well as assistance under the Nonproliferation, Anti-terrorism and Demining program. Last year, the Trump administration had asked for $130 million in economic aid for Syria and another $44.5 million under the nonproliferation and anti-terrorism program.

Overall the budget blueprint seeks to cut funding for the State Department and the US Agency for International Development by 23%. But the government insists its goals in Syria haven't changed.

“We are committed to the enduring defeat of ISIS [the Islamic State] and al-Qaida, a political solution to the Syrian conflict in line with United Nations Security Council Resolution 2254, and the removal of all Iranian-led forces in Syria,” a State Department spokesperson said in an emailed statement. “As we continue to review administration priorities in Syria to ensure assistance is best aligned with US objectives, we may utilize funding from the Relief and Recovery Fund in a manner consistent with how it was appropriated in FY 2018.”

The proposed cut comes after the Trump administration reprogrammed $230 million in stabilization aid last year after securing some $300 million in pledges from Gulf and European states to backfill the void in US assistance. Saudi Arabia promised $100 million while the United Arab Emirates pledged $50 million.

“This appears to represent a continuation of offshoring stabilization assistance to the Gulf states and Europe,” said Chad Brand, the government relations officer for the Syrian American Council, a US-based coalition that opposes Syrian President Bashar al-Assad.

It’s unclear whether the Trump administration has secured similar commitments from US allies for fiscal 2020, which starts Oct. 1.

“We have also stressed to our partners that they must share the burden of providing for stability in areas liberated from ISIS, an effort that has resulted in significant partner contributions,” the State Department spokesperson said. “Since April 2018, the Department has elicited more than $325 million in contributions and pledges from 15 Global Coalition partners to support critical stabilization and early recovery initiatives in areas liberated from ISIS in northeast Syria. … These contributions by partners have allowed stabilization operations to continue in liberated areas of northeast Syria and will allow them to continue for the foreseeable future.”

Critics of the cuts say helping rebuild Syria is in the US interest.

“Prevention is always cheaper than the cure, which is why bolstering civil society against the Assad regime’s brutality and the draw of extremism is in America’s national security interests,” said Erica Hanichak, the government relations director at Americans for a Free Syria, another anti-Assad advocacy group. “President Trump is rightly concerned about the long-term extremist threat. Supporting Syrians who reject extremism and desire freedom is the surest path forward.”

Congress is unlikely to go along with the aid cuts. After Trump reprogrammed economic aid for Syria, lawmakers voted in January to appropriate $40 million in stabilization assistance for opposition-held areas in Syria for fiscal 2019, which runs through September. And House Foreign Affairs Committee Chairman Eliot Engel, D-N.Y., declared today’s budget “dead on arrival.”

“It’s stunning that this White House continues to demonstrate such contempt for the diplomats and development experts on the front lines of our foreign policy,” Engel said in a statement.

In addition to eliminating the aid, Trump has also vowed to withdraw most US troops from Syria. After initially promising to withdraw all 2,000 US soldiers, Trump reportedly agreed last month to keep 200 troops in Kurdish-controlled northeastern Syria as part of a multinational force and another 200 in the al-Tanf garrison to prevent the Islamic State’s re-emergence.