How crisis with US dealt fresh blow to Turkish press

The depreciation of the Turkish lira, fueled by the crisis between Ankara and Washington, has raised the cost of imported paper enormously, pushing already-struggling publications to the brink of collapse. 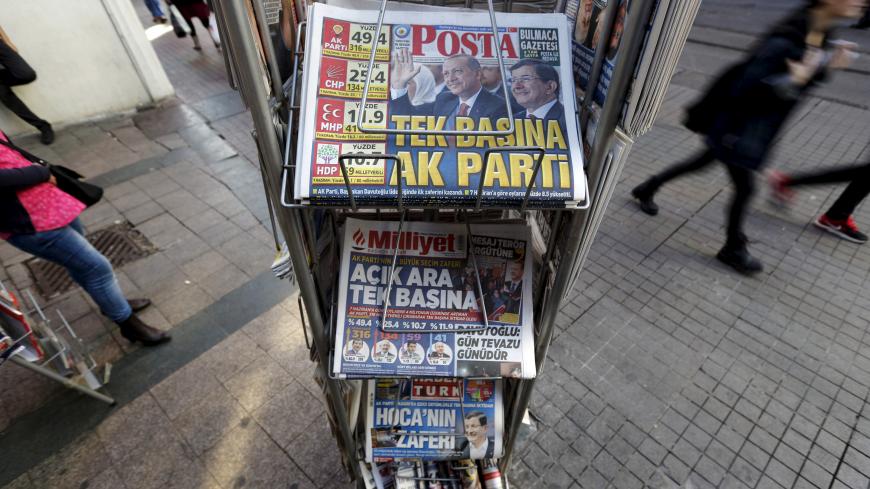 The crisis between Turkey and the United States has dealt an unexpected economic blow to the Turkish press, threatening especially the handful of newspapers that remain critical of the government and are already struggling to survive.

Bilateral tensions over Turkey’s detention of an American pastor climaxed in late July, resulting in unprecedented US sanctions on Ankara. The row fueled the slump of the embattled Turkish lira, aggravating financial woes in many sectors hit by the skyrocketing cost of imported materials.

The press, which relies heavily on imported paper, is among the worst-hit sectors. Some newspapers have hiked their prices, while others have had to take publishing breaks or discontinue supplements. Book publishers are in similar turmoil.

In the printed media, where circulations were already down in recent years, the crisis is hitting hardest the shrinking camp of newspapers critical of the government. Unlike their pro-government counterparts, these newspapers lack advertorial support from the government and its crony companies. Last week, Cumhuriyet, whose journalists have faced imprisonment and trials, hiked its price by 1 lira to 2.5 liras ($0.41), while Sozcu, another adamant government critic, terminated its weekend supplements and also significantly hiked its price.

For Cumhuriyet’s Ankara representative, Erdem Gul, the currency crisis has doubled the pressure on the press. “The media was already struggling in a nondemocratic climate, and now it is taking a hit from the foreign-exchange turmoil,” he told Al-Monitor. “One could hardly imagine a bigger threat to the media than this dual pincer.”

Emin Pazarci, the Ankara representative of Aksam daily, said serious financial problems were already plaguing the sector in the past several years. “Previously, newspapers sought to increase their circulations, but that’s not the case anymore because their costs have come to exceed several times their sales revenues,” he told Al-Monitor. “They try to cover the gap with advertisements, which is why they fire journalists and hire more staffers to advertising departments. The latest situation will lead newspapers to take fresh austerity measures to survive.”

Aydinlik, one the hardest-hit papers, suspended its publication for three days last week. In an Aug. 21 editorial announcing the decision, the paper decried the country’s reliance on imported paper. “The price of paper has tripled, based on [the price of] the dollar. And while the dollar is choking the printed press, public institutions are watching from the sidelines,” the daily wrote, urging the government to intervene.

After the three-day break, Aydinlik columnist Mustafa Pamukoglu wrote that the cost of a ton of newsprint had jumped to up to 5,000 liras ($812) from about 2,000 liras ($325) in December, noting that Turkey imports more than 500,000 tons of newsprint per year, mostly from Russia. As one remedy to the crisis, he called for a balanced distribution of advertisements between newspapers of various stripes. “Public banks and institutions in particular should distribute fairly their advertisements and announcements … regardless of political convictions,” he stressed.

Another Aydinlik columnist, Tunc Akkoc, opined, “No newspaper can afford such costs … without support. You need either a holding or government support to back you up.”

Sozcu columnist Rahmi Turan, for his part, wrote, “The dollar-related increase in paper prices has affected all newspapers, excluding, of course, the foster partisan newspapers. None of them can survive without the support of the Justice and Development Party government.”

Magazines have also been hit hard. A bimonthly archaeology magazine, for instance, had to postpone the printing of its new issue, telling its readers, “To sustain independent publishing under the current exchange-rate conditions is near impossible.”

The popular satirical magazine LeMan is also in trouble. In an Aug. 24 Twitter message, Tuncay Akgun, a cartoonist for the magazine, recalled the much-criticized privatization of state-owned paper manufacturer SEKA years ago, adding, “Now, we are pondering how to print LeMan next week.”

The Ugur Mumcu Investigative Journalism Foundation appealed for support from readers, saying it was struggling to print the books of its namesake, the prominent investigative journalist Ugur Mumcu, who was assassinated in 1993.

For Kenan Kocaturk, the head of the Turkish Publishers Union, the core of the problem stems from SEKA’s privatization in 2004 and the subsequent closure of several paper-producing plants, which made Turkey dependent on imports to meet its paper needs. SEKA’s decades-old factory in the northwestern city of Izmit was sold off to the Albayrak business group, which owns the staunchly pro-government Yeni Safak daily. According to Kocaturk, Turkey does not produce book paper at all, and the price of this item is also on the rise.

Last year, the Albayrak group had announced plans to increase paper production. A new plant with a capacity to produce 700,000 tons of paper per year was to become operational in two stages — the first in early 2018 and the second in early 2019. The company has yet to provide an update on the project.

Appeals for government support to ease the paper crisis have remained unanswered thus far. The government’s failure to curb the meltdown of the lira is forcing the Turkish press, especially newspapers critical of the government, to give up their printed editions and publish solely on the internet, while firing staff in the process. Haberturk daily, which is owned by the powerful Ciner business group, already did so in early July, citing “unbearable” costs and decreasing advertisement revenues.

According to Utku Cakirozer, a former journalist and now a lawmaker for the main opposition Republican People’s Party, the paper crisis has raised the specter of closures in the media sector, where the unemployment rate is already 30%, with some 12,000 media workers without jobs.

Sounding a similar warning, Gokhan Durmus, the head of the Turkish Journalists Trade Union, said that nearly 10,000 journalists had lost their jobs in the past five years alone and that some newspapers would be forced to close down in the absence of supportive measures by the government.