Baris Oner — code-named Tarik the Turk — is the third high-profile member of the Kurdistan Workers Party to be targeted this month. 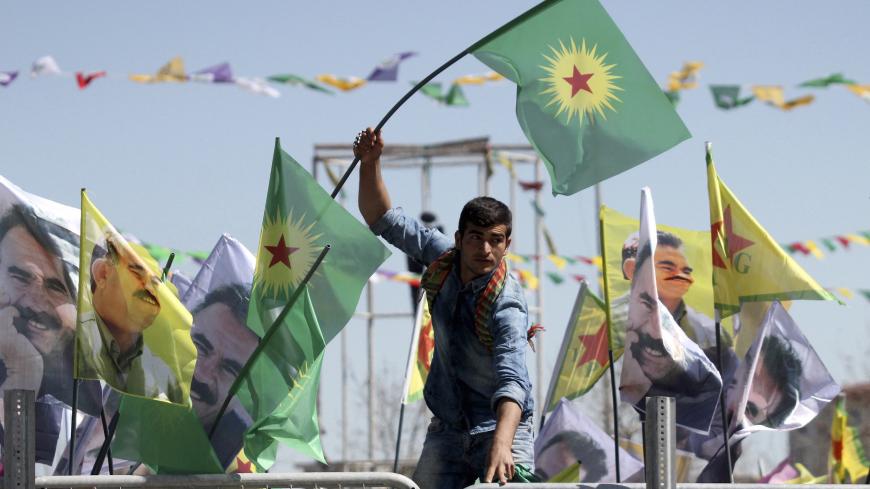 A demonstrator waves a flag of the outlawed Kurdistan Workers Party during a gathering to celebrate the spring festival of Nowruz in the Kurdish-dominated southeastern city of Diyarbakir, Turkey, March 21, 2016. - REUTERS/Sertac Kayar

Turkish security forces have killed a member of the Kurdistan Workers Party (PKK) who is on the country’s most wanted list, the third high-profile militant to be targeted this month. Okay Memis, the governor of the Black Sea province of Gumushane, said that Baris Oner, a PKK fighter of Turkish background code-named Tarik the Turk, had been killed along with another militant — an ethnic Iranian, code-named Sorej — in clashes with security forces in the rural Yesilkoy area of Gumushane on Aug. 22.

Turkish security officials quoted by the pro-government daily Sabah said Oner was the PKK commander in charge of the outfit’s Black Sea region operations and had a bounty of 4 million Turkish liras ($660,960) on his head. Operations were continuing in the area, with elite gendarmerie forces backed by attack helicopters searching for fleeing militants. Memis claimed the PKK had been immobilized in the Black Sea region as a result of the operation, which started three days ago.

In a related development, the state-run Anadolu news agency reported that another key PKK commander, Yusuf Sungur, had been killed together with his deputy, Serbest Gun, in a weekend operation in the southeastern province of Sirnak. Before that, on Aug. 11, Ibrahim Coban, who was also on the Interior Ministry’s most wanted list, was killed in the province of Tunceli in what authorities called an “operation.” Details of his death were not revealed, but the successful targeting of top PKK leaders suggests that Turkish intelligence on the group is gaining ground. This in turn may be why the PKK has resumed assassinations of alleged "collaborators." Shopkeeper Mevlut Bengi was killed June 26 in the eastern province of Dogubayazit for his close ties to the ruling Justice and Development Party.

News of Oner and Sungur’s deaths have yet to be confirmed by pro-PKK Firat News Agency, which typically records such “martyrdoms."

The killings of Coban, code-named Mahir Atakan, and top PKK militant Zaki Shingali, however, continue to dominate Kurdish media, with a steady flow of eulogies for the men, in particular Shingali, who was an ethnic Yazidi from Turkey. Shingali is credited with rescuing thousands of his ethnic kin from imminent slaughter by the Islamic State in August 2014, as the group raped and pillaged its way across the Yazidi heartland.

A Turkish airstrike targeted Shingali's vehicle on Aug. 15, killing him. Shingali was traveling back from a public event in the Yazidi-dominated town of Kocho in Iraq’s Sinjar region. He is the most prominent PKK leader to have been killed by Turkey in recent years.

Aug. 15 marked the fourth anniversary of the massacre of hundreds of Yazidis by the Islamic State in Kocho. On the same day 34 years ago, the PKK began its armed campaign, initially for Kurdish independence then autonomy against the Turkish state, and Shingali, whose real name was Ismail Ozden, was among the first to join.

Middle East Eye, a London-based online news outlet covering the region, reported from Ankara that the United States had shared intelligence that helped Turkish forces target Shingali, even as Washington and Ankara continue to spar over Andrew Brunson, the evangelical American pastor being held by Turkey.

The outlet based the report on an interview with an unnamed Turkish diplomat who offered the alleged US tip-off as proof of continued military cooperation between the NATO allies. A Pentagon spokesman neither denied nor confirmed that the United States had provided the information leading to Shingali’s death.

Western diplomatic sources, who spoke on condition of strict anonymity to Al-Monitor, professed to be “unaware” of any intelligence sharing related specifically to Shingali.

Secretary of Defense Jim Mattis offered to help Turkey target top PKK leaders based in the Qandil Mountains in Kurdish-controlled northern Iraq during an official visit to Turkey in August 2017, as first reported by Al-Monitor at the time. But defense analysts assert that Turkey would not have needed US help in killing Shingali.

Aaron Stein, a senior fellow at the Atlantic Council who specializes in security issues and Turkey, told Al-Monitor, “I don’t personally think for this strike [against Shingali] the Turks needed American assistance.” Stein argued, “The reported details about his presence at the commemoration allowed Ankara to zero in on where he would be. They [Turkey] clearly have friendly contacts in the area who would spot for them.”

A well-informed Kurdish source inside Iraqi Kurdistan contacted via WhatsApp concurred. “The attack was clearly carried out with the help of an informant inside the YBS,” he said, referring to the Sinjar Resistance Units, the Yazidi militia established by the PKK.

The Kurdish source added, “We believe that a GPS tracking device was planted by Turkish collaborators on comrade Zaki’s car.”

According to Stein, the operation would have been easy: “The strike was as simple as designating a target with a laser from a high-flying drone. The bomb drop was textbook and the drone did what it was then supposed to do, which is hunt for squirters and ensure that the target was killed.”

Stein added that the release of the footage of the strike “suggests that Ankara knew who it was hunting before the strike took place.” He noted, “It is also quite clever to leak this story to a friendly outlet like [Middle East Eye] to sow distrust between the United States and the YPG.” The YPG is the acronym for the Syrian Kurdish People’s Protection Units, which is the Pentagon’s top ally against the Islamic State in Syria. The Syrian Kurdish militia has close ties with the PKK and the YBS. Turkey has long pressured Washington to end its relationship with the YPG, saying it is no different from the PKK — that they are all terrorists.