Although Turkey is suffering one of the worst currency crises in its history, no single mainstream Turkish media outlet has covered the development. 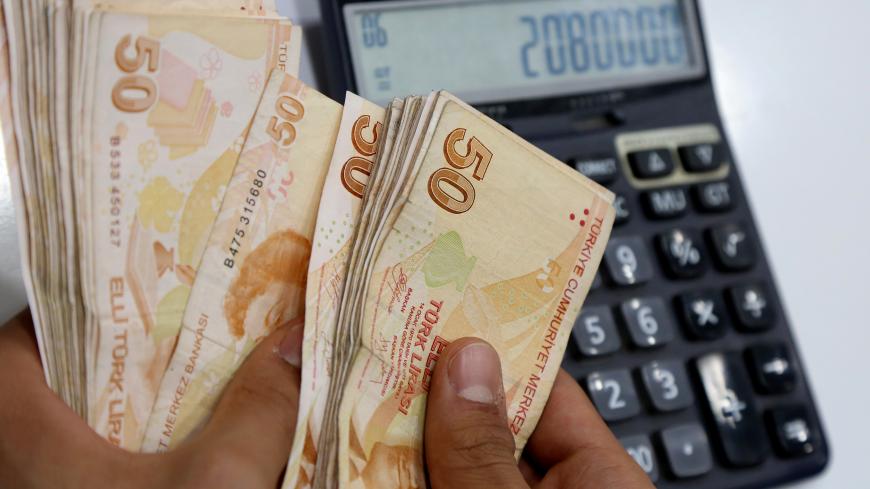 Aug. 6 — the date when the Turkish lira hit record lows following the sanctions the Donald Trump administration slapped on Turkey over the row caused by the detention of American pastor Andrew Brunson — might mark the Turkish economy’s “Black Monday.”

On Aug. 6, the Turkish currency plunged to 5.11 liras to the US dollar, breaking the psychological barrier of 5 liras. Not only that, but around midnight, the lira even traded at 5.42 to the dollar.

While these developments were unfolding, President Recep Tayyip Erdogan — who might also be dubbed as the country’s “supreme leader” who is in charge of everything — was heard from only once. The irony is that Erdogan met that same day with a high-level official from a country, Venezuela, which is also suffering from a serious economic crisis.

The relations between the two countries are such that Maduro chose to attend Erdogan’s inauguration ceremony in Ankara on July 9. And after the attack, Erdogan immediately called his Venezuelan counterpart to express solidarity.

One of the top commonalities that bring the two countries close to each other is that both capitals are blaming the United States for their economic and political hardships.

Some Turkish social media users had fun with this issue. “Given the plunge in the value of the Turkish lira on Monday, some social media users wondered, tongue-in-cheek, if the Turkish president might be asking for economic advice from the Venezuelan minister, whose country is currently experiencing an economic crisis that has seen the currency collapse,” the Ahval news website reported.

Yet is there anything that Venezuela could offer Erdogan as a remedy at a time when the oil-rich South American country can’t even heal its own economy? Currency expert Steve Henke of John Hopkins University said Venezuela’s inflation has breached 27,000%. It is a dumbfounding figure.

Turkey’s annual inflation rate, which climbed into two-digit figures last year, is also sending tremors to international investors and heralding a deep economic crisis. The rate was 15.39% in June — the highest since 2003.

Turkey cannot be compared to Venezuela — a failed state and a bankrupt country where tens of thousands of people living below the poverty line have fled to fled to neighboring Colombia. However, Turkey, strangely, has begun to be mentioned in the same breath as its best friend in South America. Bloomberg News on June 22 — two days before the June 24 elections that cemented Erdogan’s unmistakable “one-man rule” — speculated that were Erdogan to be re-elected (as he was), his political future would hang on whether an economic policy based on pouring cement could sustain the kind of growth that has kept him in power for 16 years. The news service added that the logical conclusion for an economic policy that ignores inflation and financial markets in a dash for growth is large-scale defaults, bailouts and even nationalizations. According to Bloomberg, “an economist, who preferred not to be named, described what may happen as 'Venezuela without the oil.'"

The same article quotes well-known Turkish economist and financial expert Atilla Yesilada as saying that such a scenario would not occur, as Erdogan would retreat from the brink. Yesilada said, “He won’t reform, he won’t build what is needed for sustained future growth, but his sense of self-preservation will stop him from forcing Turkey into a crisis.”

Following what occurred Aug. 6, that observation is far from certain. There isn’t any checks-and-balances institution in Turkey that can restrain Erdogan. The country's parliament is dysfunctional. The state of the opposition is even worse. The main opposition party has been unable to recover from the trauma of the elections. The internal bickering and infighting in the ranks of the Republican People’s Party (CHP) have paralyzed its ability to perform its foremost duty: opposition.

The CHP has almost nothing to say as the financial crisis is worsening and the Turkish lira is melting down. Another opposition party, the Iyi or Good Party, is busy convening its congress amid deep conflicts and divisions between its leaders.

However, the worst piece of the puzzle is the rising nationalist frenzy engulfing Turkish public opinion, which seems to be united under anti-Americanism. Unaware of what might await Turkey in the future or what really happened Aug. 6, Turkish public opinion is busy blaming the United States for the meltdown in the Turkish lira.

Yet public opinion is not to blame for its lack of knowledge as, amazingly, no single mainstream newspaper or television channel reported the historic meltdown that occurred Aug. 6.

As Turkish public opinion is not fully aware of what is happening and is seemingly standing behind its government in its confrontation with the Washington administration, the country's decision-making mechanism in terms of economics is paralyzed.

The Ahval news website reported that a well-known banking expert and former high-ranking bureaucrat who declined to be named said, “We started feeling the effects before the US government made its formal announcement," and called US sanctions "just the cherry on top.” The expert continued, "The dollar is trading above 5 liras, Treasury interest rates exceeded 21%. Neither the minister nor the bureaucrats are making statements about their policy measures to break this trend. It's been five weeks since the election, and we are in the sixth week. The administration is all talk, but there is no action."

The expert also told Ahval, “Many Turkish bankers believe Halkbank could be fined up to $20 billion by the US Treasury Department. If this happens, the whole burden of that fine will be on the Turkish Treasury, which could seriously hamper its ability to deal with the future financial downturn. Turkey's hand is not as strong as our administrators like to believe. Either Turkey safely returns the American pastor and gives up on S-400s, or I don't even want to think of the economic destruction that might follow.” The S-400 is the missile defense system that NATO member Turkey has decided to buy from Russia; it is incompatible with NATO systems.

Although it is still far-fetched to predict that Turkey could even undergo an experience similar to that of Venezuela's, one could say that Turkey looks more and more like another “Venezuela in the Middle East.”