News of the killing of a young mother and infant son has sparked nationwide outrage in Turkey, and its president has renewed promises to eliminate Kurdish separatists and their enablers. 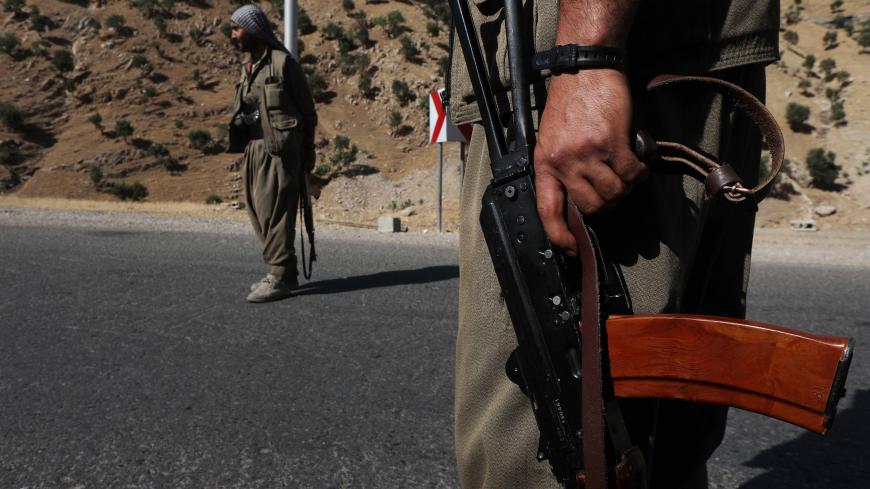 A member of the Kurdistan Workers Party carries an automatic rifle on a road in the Qandil Mountains in northern Iraq, June 22, 2018. - SAFIN HAMED/AFP/Getty Images

The Turkish authorities have vowed to escalate the fight against the outlawed Kurdistan Workers Party (PKK) following the deaths of a 25-year-old woman and her 11-month-old baby, who have been formally declared martyrs and given an official funeral, which became a platform for America-bashing.

The pair perished in Hakkari, a rugged mountainous province bordering Iraq, when an improvised explosive device planted on a roadside went off. Nurcan Karakaya and her infant son were riding back from a surprise visit to her husband, a noncommissioned officer stationed in the mainly Kurdish region, which has seen violent clashes between the Turkish army and PKK militants slipping in from their bases in Iraqi Kurdistan and Iran.

Serkan Karakaya told the HaberTurk news channel, “They spent two hours with me, then they left and within 15 minutes the explosion occurred. There is nothing to be done, may [their] two lives be a gift to the homeland.” Footage from the scene of the blast published by the pro-government Sabah newspaper showed a mangled black car and a crater in a narrow mountain pass.

Turkish authorities blamed the incident on the outlawed PKK, which resumed its bloody campaign for Kurdish autonomy when a two-and-a-half-year cease-fire collapsed in 2015. The PKK has neither claimed nor denied responsibility for the attack. But the group has targeted civilians, including foreign tourists, and seized hostages throughout the 34-year conflict that has claimed at least 40,000 lives, mostly those of militants.

News of the deaths has sparked nationwide outrage, with the hashtag “BebekKatiliHdpkk” ("baby-killer HDP PKK") trending on Twitter. HDP stands for the Peoples' Democratic Party, the largest pro-Kurdish bloc in the parliament, which is accused of being the PKK’s political arm. The government has energetically promoted this narrative and used it to justify the jailing of thousands of HDP politicians and activists, including the party’s former co-chair, Selahattin Demirtas, on thinly supported terror charges.

Speaking before the flag-draped coffins at the funeral in the central Anatolian province of Sivas, Turkish President Recep Tayyip Erdogan renewed threats to reintroduce the death penalty, which was scrapped after he came to power in 2002 as part of a democratic reform offensive to qualify for now-frozen membership talks with the European Union. "We don't care what Hans says, what George says. We will look to see what Allah says," Erdogan declared. If capital punishment were restored, its most obvious target would be Abdullah Ocalan, the imprisoned PKK leader whose death sentence was commuted to life in prison following his trial in 1999.

Erdogan also declared, “Our fight will continue until the last terrorist is eliminated.” In a thinly veiled swipe at the United States, Erdogan added, “Even if there are those who stand by this separatist terrorist outfit and clear its path, and you understand [who] I mean, we will not abandon the hunt.”

Erdogan was alluding to the United States’ alliance with the People’s Protection Units (YPG), the Syrian Kurdish militants who are leading the fight against the Islamic State in northeastern Syria and are closely intertwined with the PKK. Turkey is demanding that Washington scotch its partnership with the YPG, saying they are no different from the PKK. In March, Turkey drove the group out of its Afrin stronghold with Russia’s help.

Erdogan’s broadside came as United States’ European Commander Gen. Curtis Scaparrotti met with Turkish Defense Minister Hulusi Akar and Chief of General Staff Yasar Guler to discuss bilateral issues, notably Syria and the road map to eliminate YPG influence in the mainly Arab city of Manbij, which Turkey has declared a red line. Scaparrotti was expected to visit US forces at Incirlik Air Base in Adana then address a change-of-command ceremony for the Allied Land Command in Izmir wearing his Supreme Allied Commander of NATO hat.

The Aegean port city of Izmir is where the courtroom drama around imprisoned North Carolina pastor Andrew Brunson has played out. On July 26, President Donald Trump threatened to impose “large sanctions” on Turkey if he were not freed. But on July 31, prosecutors rejected Brunson’s lawyers’ appeal that he be released from house arrest and allowed to fly home.

Brunson has been held since October 2016 on specious espionage and terror charges, including alleged collusion with the PKK. Turkish Foreign Minister Mevlut Cavusoglu and US Secretary of State Mike Pompeo are expected to continue to discuss his case on the sidelines of an Association of Southeast Asian Nations foreign ministers’ gathering in Singapore this week in a bid to defuse the escalating crisis between the two NATO allies.

But time is running short, with Bloomberg reporting that the United States has prepared a list of Turkish entities and individuals that it will target in retaliation for the continued detention of Brunson and other US citizens and Turkish employees of its diplomatic missions in Turkey.

Quoting unidentified sources, Bloomberg said the proposed measures would mirror those applied to the Russian government and President Vladimir Putin's business cronies under the Global Magnitsky Act of 2016. The law allows the US government to sanction individuals, companies or other entities involved in corruption and rights abuses across the globe.

If Washington follows its words with action, it could sound the death knell for Turkey's wobbly economy. The Turkish lira sunk to new lows against the dollar following the news. But will Erdogan blink? His defiant rhetoric so far suggests not.