After separate sets of discussions with the Syrian and Saudi foreign ministers, Russia continues to dwell on its displeasure with US moves in Syria. 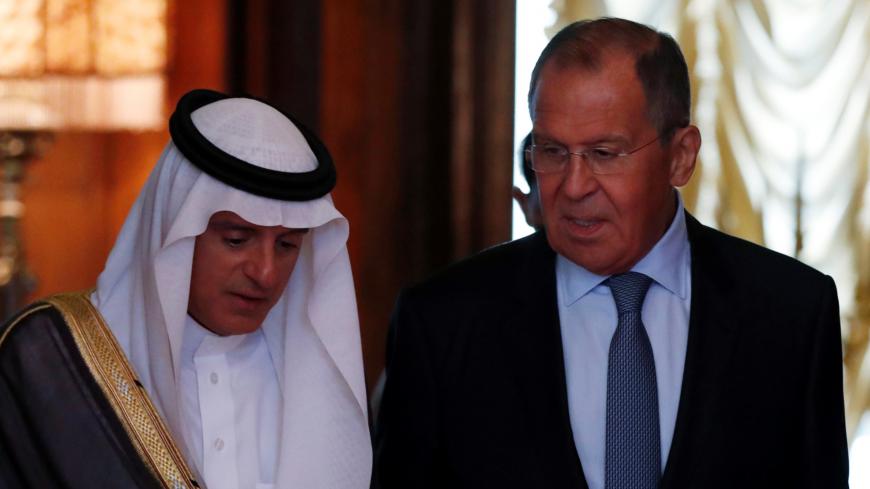 The looming battle for Idlib, the last major rebel bastion in Syria, sidelined all other issues at news conferences following recent talks in Moscow between Russian Foreign Minister Sergey Lavrov and his counterparts from Syria and Saudi Arabia.

Lavrov made it clear at both news conferences that a military operation in Idlib was unavoidable and that there was further progress in Russian-Turkish talks over the issue. However, Moscow is particularly concerned about the US presence on the ground and what the White House’s Syria strategy will be. Lavrov’s remarks at the news conferences actually resembled a virtual debate of sorts with US counterparts. What lent a certain piquancy to the situation is that Saudi Arabia is Washington’s closest Arab ally; however, Saudi Foreign Minister Adel al-Jubeir went out of his way not to speak ill of either Moscow or Washington.

Jubeir arrived in Russia amid a heated debate between Moscow and the West surrounding the situation in Idlib. On the eve of the Aug. 29 visit, Russia’s Defense Ministry provided information that the Hayat Tahrir al-Sham terror group — still called Jabhat al-Nusra in Russia — has been planning a chemical attack; Russia accused British intelligence agencies of assisting in the plot. This is important because the United States has sternly warned Syria against using chemical weapons in Idlib; Russia has sought to turn the tables by muddying the blame for any such attack.

Lavrov said US officials were trying to “take the heat off Jabhat al-Nusra using every trick in their book, hoping to be able to use it in the fight against what they refer to as the 'regime.'"

Lavrov added, “This abscess of terrorists in Idlib must be eliminated. There is a political understanding on this matter between Moscow and Ankara.”

The next day, following talks with Syrian Foreign Minister Walid Muallem, Lavrov was asked about the planned schedule of a coordinated operation in Idlib, as well as the timing of a dissociation process between Jabhat al-Nusra terrorists and the armed opposition.

“It must be done as soon as possible, but Moscow does not set any artificial deadlines,” Lavrov said.

Turkey has been opposed to an Idlib operation. But while Moscow says it appreciates its relations with Ankara as well as the Russian-Turkish-Iranian Astana process, Russian military sources told Kommersant newspaper that the Idlib operation is unavoidable, even if the specific format for it is yet to be determined.

The Saudi foreign minister did not seem to perceive the Idlib issue as a priority. Still, while Riyadh has little to no clout over the regional situation, Jubeir emphasized the role of Saudi Arabia in uniting the Syrian political opposition for talks.

Lavrov shared this sentiment and lavished his counterpart with compliments. “We are especially grateful to our Saudi friends for their role in uniting the Syrian opposition and ensuring the participation of the representatives of the Moscow and the Cairo groups.”

The joint press conference had an appearance of a discussion between two best friends looking forward to meetings to come. And these meetings may indeed be in the offing. No wonder Lavrov said, “President [Vladimir] Putin is keeping in mind the invitation by King Salman bin Abdul-Aziz Al Saud to visit Saudi Arabia, which was extended during the king’s visit to Russia in October 2017.” Lavrov also said, “We agreed that the date and other details of this visit would be further coordinated through diplomatic channels.”

Both ministers tried to avoid exhibiting any disagreement publicly. Thus, the Russian minister refrained, while in the presence of his Saudi guest, from dwelling on US investment in Syrian territory to the east of the Euphrates River. Yet Lavrov quite enthusiastically discussed this subject with his Turkish counterpart the week before, and with his Syrian counterpart the day after the talks with the Saudis.

For Moscow, it is hard to come to terms with the US refusal to back the Russian project for the return of refugees and how the United States has helped prevent others from doing so. The same goes for foreign participation in rehabilitating territories that are under control of regime forces. In the meantime, Washington is engaged in rebuilding infrastructure in areas of Syria where US troops are stationed.

At the press conference with Muallem, the top Russian diplomat accused the United States of facilitating the fragmentation and division of Syria. Obviously, Moscow knows that Saudi Arabia and the United Arab Emirates have pledged to be the larger contributors to Syria’s development in areas where the United States holds sway. However, Lavrov, in speaking to journalists while accompanied by Jubeir, was tactful; the Russian foreign minister said in passing that at the negotiating table, the Saudi delegation was made aware of “the efforts currently being undertaken by Russia, which is in contact with the corresponding countries in the region, to provide proper conditions for returning refugees and internally displaced persons to their homes in Syria.”

At the same time, the Russian foreign minister urged the United Nations “to play a more active role in creating a proper environment for the return of refugees and displaced persons, including the modernization and restoration of the socio-economic infrastructure in Syria.”

Jubeir also avoided sensitive issues, other than to voice his opposition to Russia’s stance on the Iran nuclear program, the Joint Comprehensive Plan of Action, reached between Iran and the P5+1 group of countries in 2015. The P5+1 included Russia.

“The agreement does not envision curbing Iranian activities in supporting terrorism and Tehran's violation of international resolutions on ballistic missiles. We believe that Iran deserves that we adopt more sanctions against that state,” the Saudi foreign minister said in support of recent US sanctions on Tehran.

In addition, Saudi Arabia’s foreign minister did not allow himself to be painted as a US opponent. When Russia’s state-run RT channel asked Jubeir about US criticism of a possible Saudi purchase of the Russian S-400 air defense system, Jubeir replied, “There are two things in Saudi Arabia that we do not bargain on: security and faith. Our leadership always strives to buy the most modern weapons for its army, to protect its sovereignty, security and its allies’ security.”

He also said Saudi Arabia favors discussing differences concerning weapons procurement “directly with its American and Russian allies rather than with media outlets.”

A day later, the Lavrov-Muallem news conference demonstrated the typically convergent positions of Moscow and Damascus. During his stay in Moscow, Muallem primarily sought to find out the outcome of Russian negotiations with the Turks and other regional players. The day after meeting Lavrov, the Syrian foreign minister held talks with Russian Deputy Prime Minister Yury Borisov. Muallem and Borisov are co-chairs of the Russia-Syria Intergovernmental Commission for Trade, Economic, Scientific and Technical Cooperation. The negotiations focused on Syrian reconstruction, with Muallem promising “to give Russia a priority.” Recently, Damascus made a similar promise to Iran.

The Lavrov-Muallem press conference turned interesting because of Moscow’s outspoken concern over the US presence in Syria, both on the eastern side of the Euphrates and at the US al-Tanf base near Iraq. It is clear why Moscow is worried. Should the operation to regain control of Idlib turn out to be successful, the question will arise about other parts of the country, largely remaining under Turkish and American tutelage. While Moscow hopes for some compromise with Ankara, it expects a tough confrontation with Washington. This is all the more so because the United States can arrest the already-difficult process of Syria’s political settlement. It is Moscow that has managed to break the impasse by securing the start of the formation of a constitutional commission. Now Russia is going to face a battle for the constitution, both with Damascus and with the Syrian opposition; in Russia's view, the United States and its European allies are making the opposition less flexible when it comes to making concessions. Here, Saudi support would be welcome. Whether the Moscow negotiations were effective in this regard will be seen in less than two weeks in Geneva, where all the stakeholders in the Syrian settlement will come together to consult with UN officials.