Putin man in the middle between Assad, Erdogan over Idlib

A Syrian government attack on Idlib could upend the Astana accord. 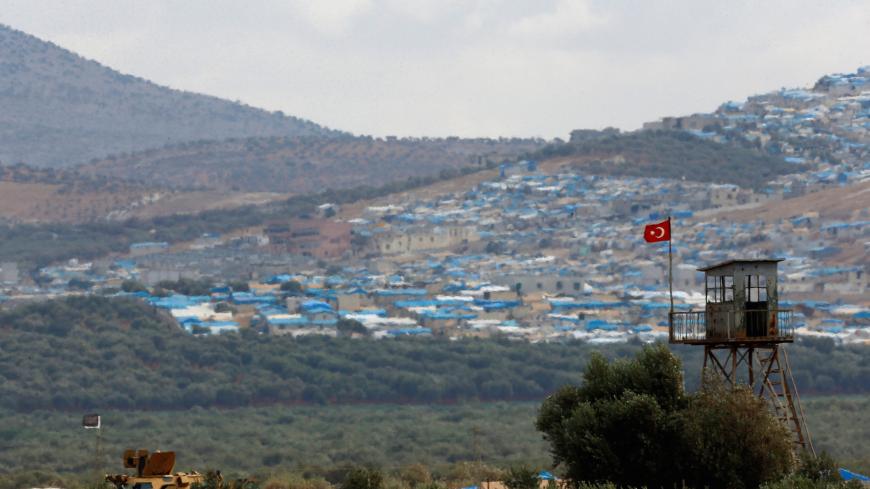 Turkish President Recep Tayyip Erdogan is counting on his Russian counterpart, Vladimir Putin, to prevent a Syrian military attack on Idlib, which, Erdogan said, could destroy the Astana accord.

Syrian President Bashar al-Assad said July 26, “Idlib is our goal, but not just Idlib. … The military — and it is at their discretion — will decide priorities and Idlib is one of these priorities."

“I asked for the necessary intervention by him [Putin] on this subject. My hope is, God willing, he will do what is necessary,” Erdogan said after meeting with Putin that same day on the sidelines of the BRICS summit in Johannesburg, South Africa.

While Russia continues to work its shuttle diplomacy to broker an understanding regarding red lines between Iran and Israel in Syria, as we reported here last week, Putin is also carrying much of the diplomatic water to prevent an escalation in the north between Turkey and Syria.

“Ankara is also worried that an attack on Idlib will provoke a new influx of refugees, at a time when it is hoping to stabilize the region to start repatriating some of the 3.5 million Syrian refugees Turkey already hosts,” writes Semih Idiz.

Within the Astana framework — a de-escalation agreement reached last year among Ankara, Moscow and Tehran — Turkey has set up 12 observation posts to keep apart Syrian military forces and the armed groups that presently control Idlib. “Many believe that this deployment is also part of an effort by Ankara to gain another military foothold in the region, to clear northern Syria from the Kurdish People’s Protection Units (YPG), which Turkey considers a terrorist organization,” adds Idiz. “Turkey’s problem is that the Astana accords exempt groups that are listed by the UN as terrorist organizations from being attacked. Hayat Tahrir al-Sham is one of these groups, and Russia, which considers it a legitimate target, has actively aided Syrian regime strikes against the group in Idlib.”

“Multiple evacuations of various opposition groups from around the rest of Syria to Idlib long ago turned the city into a virtual ‘dumping ground’ of all elements that Assad, as well as Iran and Russia, have been fighting against,” writes Maxim Suchkov. “The evacuations were deemed a temporary fix that would ultimately demand a more feasible solution; Idlib was left to the future because of the higher operational urgency that other fronts demanded. But Idlib's moment appears to have come now that the balance on those other fronts has been tipped in favor of the government forces.”

In addition to Hayat Tahrir al-Sham, an al-Qaeda affiliate that governs most of Idlib with horrific brutality, this dumping ground includes a militia coalition headed by Ahrar al-Sham, a Salafi group that also advocates radical implementation of Islamist law, remnants of the Free Syrian Army and what probably can best be termed a collection of armed gangs backed by Turkey.

“For Moscow,” Suchkov explains, “Idlib is vital primarily because the majority of all the anti-Russia Northern Caucasus fighters in Syria have assembled there. This is also becoming a zone from where combat unmanned aerial vehicles (UAVs) fly toward Russia’s Khmeimim air base, posing a danger to Russian military personnel. The security demand to settle accounts with these homegrown enemies away from home territory has been one of President Vladimir Putin’s initial drivers for the Syria campaign, and he is determined to bring that goal to a close. Yet the way through which it can be done is negotiable, and this is where Moscow would want to see Ankara’s collaboration.”

“A nuclear option vis-a-vis the city is not Russia’s priority at this point,” Suchkov continues. “Such an attack would be fraught with far too many complications in relations with Turkey itself and would trigger a new humanitarian crisis and stem into a massive refugee outflow. This, in turn, would undermine Russia’s brainchild initiative on the return of refugees, where Turkey is also seen as a critical partner.”

“A separate task for Russia will be to restrain Assad’s fever to take advantage of the momentum his army is having and storm Idlib with force. This isn’t easy from a political and diplomatic perspective, but Damascus simply cannot go on the offensive of such a populated settlement with dozens of heavily armed opposition militants without Moscow’s military support. This, however, neither excludes occasional skirmishes nor means the Syrian army won’t seek to chip off certain neighborhoods from the opposition while trying to avoid unintended clashes with the Turkish military,” adds Suchkov.

It is no surprise that Idlib took center stage at the latest International Meeting on Syria, chaired by Russia, Iran and Turkey on July 30-31 in Sochi. Sochi has been the location for talks between Syrian government and opposition groups on a new Syrian constitution. Anton Mardasov explains that the blending of the Astana and Sochi forums was no accident.

“From the beginning the Astana agenda has contained such issues as constitution drafts, the liberation of hostages and access to humanitarian aid,” Mardasov writes. “Astana is obviously exhausting itself as a ‘military issues format.’ As the operations that the pro-regime forces conducted in three out of four de-escalation zones demonstrated, the ‘trust-building measures’ have a distinctly aggressive, capitulation-oriented nature. Therefore, the guarantor nations — Russia, Iran and Turkey — attempt to pre-emptively navigate the negotiation process into the realm of politics and associate it with the results of the Syrian National Dialogue Congress in Sochi. The only issue that prevents the Astana format from an ultimate meltdown is the fate of Idlib, the fourth de-escalation zone.”

While the summit’s final statement did not reference an agreement on Idlib, Alexander Lavrentiev, Russia’s special envoy for Syria, said that a “large-scale operation in Idlib is out of the question," and that “we encouraged the moderate opposition to actively cooperate with Turkish partners and with Russia — to prevent any danger both for Russian soldiers of the Khmeimim air base and for Syrian government forces staying on the line of contact. In this case, we will not have to engage in full-blown fighting against militants,” as Mardasov reports.

However, Mardasov writes the Russian position contains some deliberate ambiguity. Lavrentiev later points out that Idlib “is infested by numerous radical elements that have a negative impact on the situation as a whole and on the moderate opposition in particular,” and that “Russia’s own patience may eventually too have run thin.”

The Sochi discussions have become intertwined with the Geneva process, as well as with Astana. “The ‘Astana 10’ also hosted the fourth meeting of the action group on prisoner and hostage liberation in which experts from guarantor countries, the UN and the International Committee of the Red Cross took part. Staffan de Mistura, the UN’s special envoy for Syria, provided the representatives of the guarantor countries with a preliminary list of candidates for the Constitutional Commission of Syria and an instruction on the legal methods by which they should be appointed,” adds Mardasov.