The US military is making changes to its Middle East drills to respond to the Donald Trump administration’s fears of a growing military threat from Iran. 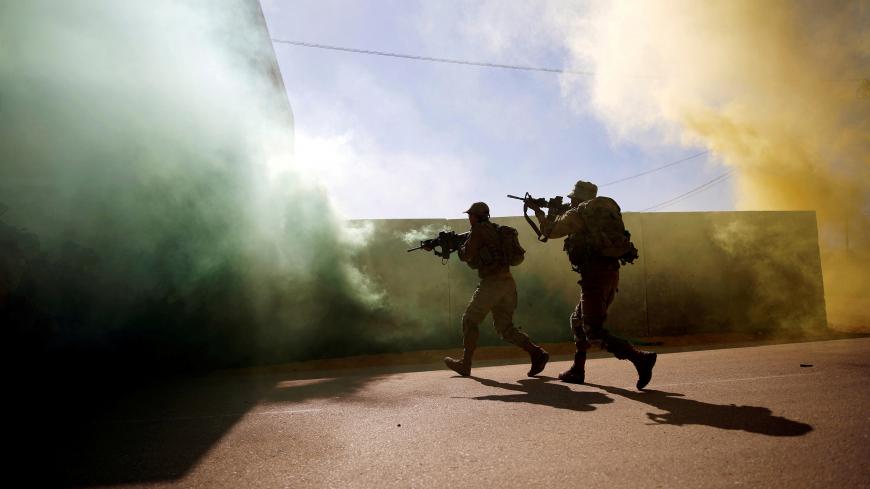 The US military is changing up its Middle East war games to deal with perceived Iranian threats short of entering into armed conflict, Al-Monitor has learned.

The Pentagon notified Congress in July about adjustments to deal with “the multidimensional aspects of gray zone warfare,” the Pentagon’s catch-all term for military operations that don’t cross into open warfare. While the report doesn’t mention Iran by name, the term “gray zone” is often associated with Iranian tactics.

The report comes on the heels of a 2018 National Defense Strategy (NDS) in January announcing that the Pentagon would seek to build a coalition of military allies in the Middle East to “counterbalance Iran,” which it fears is “asserting an arc of terrorist activities” bolstered by using proxies and its missile program.

“USCENTCOM is adjusting the program to align with the 2018 NDS,” reads the congressional notification, which was sent by the Joint Chiefs of Staff to Congress.

The congressional notification was signed off by Lt. Gen. Kenneth McKenzie, the Joint Staff director Trump tapped earlier this month to lead US Central Command, which covers the Middle East. The report calls for “a joint and combined exercise schedule” for the 74 exercises American troops conduct in the Middle East “by leveraging service effects when operating with allies and regional partners.”

The move comes as the Donald Trump administration has been ratcheting up pressure on Tehran, pulling out of the nuclear deal and ramping up sanctions while bolstering outreach to the opposition.

US military officials insisted in comments to Al-Monitor that Pentagon military exercises are not focused on specific threats such as Iran.

“Our exercises are not directed at any particular threat, but are designed to enhance our ability to be ready to respond to any contingency or compete with any adversary in the region,” US Central Command spokesman Josh Jacques told Al-Monitor. He added that that Pentagon exercises focused on enhancing tactics and strengthening cooperation with US allies.

Jacques refused to confirm changes to the program outlined in the report or discuss specifics of US military exercise planning, but he said many American military exercises deal with gray zone challenges.

Jonathan Schroden, who directs the Special Operations program at the CNA defense think tank, said the changes could be anything from unconventional warfare and information operations to high-risk missions against near peers. The Pentagon’s Special Operations Command, for example, already conducts an unconventional warfare simulation in the North Carolina woods known as “Robin Sage” that calls on rising Green Berets to train a guerrilla force in a fictional country.

The changes come as Iran’s navy staged an annual exercise in the Persian Gulf earlier this month designed to demonstrate Tehran’s ability to shut down the Strait of Hormuz, a thoroughfare for more than 20% of the world’s oil. Weeks before, Maj. Gen. Mohammad Bagheri, chief of staff of Iran’s armed forces, dubbed Tehran “the guarantor of the security of shipping and the global economy” in the strait and said the Islamic Revolutionary Guard Corps “has the strength to take action against any scheme in this region.”

“Iran has been put on notice that the continued mischief they've caused around the area, the murder that they have caused … that this is not tolerated by us, and they're going to be held to account for it,” US Defense Secretary James Mattis said at a rare Pentagon news briefing this week. Mattis cited Tehran’s support for Syrian President Bashar al-Assad, threats to close down oil shipping, and ballistic missile support to Yemen’s Houthi rebel group.

The Pentagon faces challenges in dealing with Iran’s use of unidentified proxies, drones and speedboats that can wreak havoc in the region. Specifically, Iran has effectively used proxies and combined hybrid political-military actions to throw American forces off balance, experts say.

“They’re operating with all of the tools to great effect, and we’re still dancing around the ring jabbing and using the traditional ways of fighting that we know,” said Nathan Freier, an associate professor at the US Army War College and author of a Pentagon report on gray zone warfare.

In the report sent to Congress, the Joint Staff acknowledged it faces the challenge of maintaining “a reliable funding strategy” and a potentially “reduced footprint” in the Middle East. Further cuts to the Pentagon budget or US troop numbers, the document warns, could “affect US readiness and create a perceived lack of commitment to our coalition partners.”

The Pentagon plans to cut its post-Sept. 11 warfighting fund by more than 70% in 2020, which the US military has used to underwrite Middle East operations for nearly two decades.