Two years ago, a small group of teenage Palestinian girls created a secret magazine inside their Israeli prison. Now, they hope to revive it. 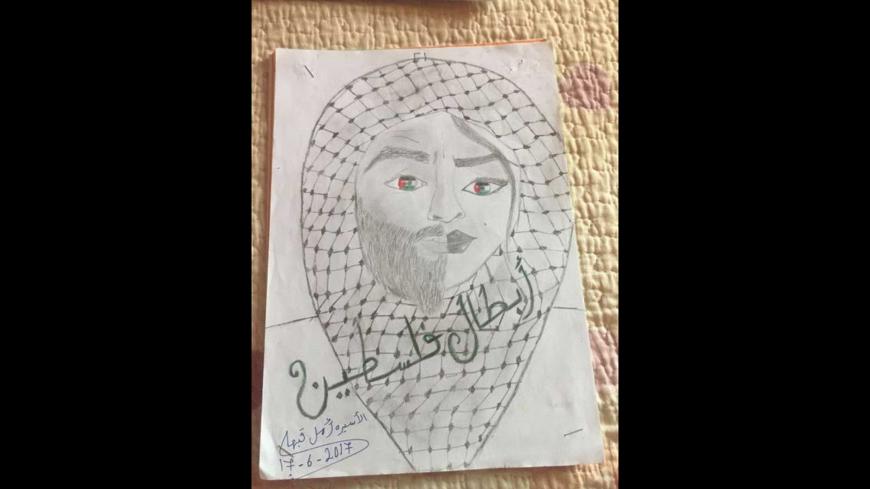 A page from the "Zahrat" magazine hand-produced by Palestinian girls incarcerated in Israel's Hasharon Prison is seen in this image taken in July 2018. - Ahmed Sammak

Despite tight controls and risk of heavy punishment, a group of Palestinian girls in Israel’s Hasharon Prison managed to publish a magazine to tell their story from behind bars, and they now hope to revive it.

The magazine was the brainchild of Mona Qa’adan, a now-released prisoner from Jenin. “I came up with the idea of a magazine when I noticed that some of the minor prisoners have a talent for writing and drawing,” she told Al-Monitor. When she approached them with the idea, the girls agreed to write about their opinions, feelings, what they faced during their arrests and how they spend their time in prison. Qa’adan was released before its first edition came out, but the inmates managed to smuggle out a copy and give it to her. She still holds on to this prized possession two years later.

They decided to call the magazine “Zahrat,” which means "flower" in Arabic; it is the name given to girls in Israeli prisons. They have managed to produce 15 hand-written issues. The first issue, dated Sept. 22, 2016, was 12 pages long. The last, with 34 pages, came out on Dec. 29, 2017. Eight copies were smuggled out of central Israel's Hasharon Prison, recently in the news because Ahem Tamimi, the Palestinian teen who slapped an Israeli soldier, was jailed there.

Even now, the team is secretive about how they smuggled the copies out of the prison. “We have several successful ways to do so,” Qa’adan told Al-Monitor.

The first two issues of the magazine focused on cultural, social and religious topics. It was in the third issue that the contributors started to open up about their suffering inside the prison.

The lack of supplies was a major obstacle. “We used to get colored pencils from the Red Cross, which visited the prison every six months. Each cell used to get 12 pencils. There were 11 cells, some of which had four, six or eight prisoners. We used to work on more than one copy for the same issue of the magazine in case we got caught. We were able to finish 15 issues in total, but only eight were smuggled outside the prison,” Qa’adan said. 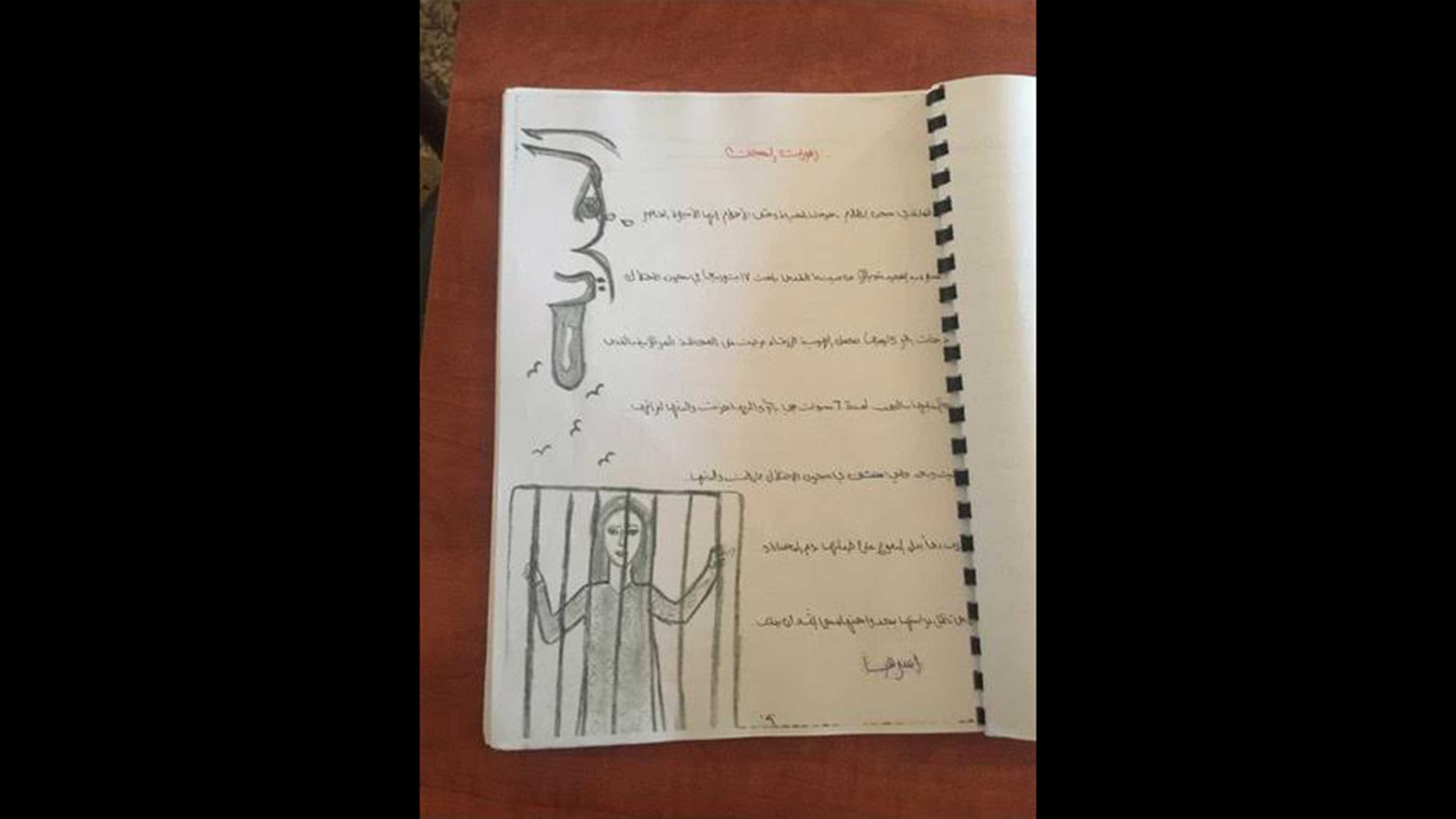 A copy of the last issue was smuggled out by Malak al-Ghaliz, the youngest prisoner at 15, when she got out of the prison on Dec. 29, 2017. Ghaliz, sentenced to eight months for attempting to stab an Israeli soldier at the Qalandia checkpoint in southern Ramallah on May 20, 2017, was Zahrat's culture writer.

She told Al-Monitor about her story, part of which was narrated in the magazine. “When they first arrested me at the checkpoint, they sprayed pepper spray in my face and kept me handcuffed from behind for five hours. I was transported in a military vehicle, and the soldier who was sitting opposite me kept hitting me all the way from the checkpoint to the prison. When we arrived, other soldiers made fun of me, cursed me and took pictures of me with their smartphones. Some of them threatened to hit me,” Ghaliz told Al-Monitor.

Ghaliz said that life in prison was stifling, with bans on speech and creativity. “We were not allowed to say the word ‘Palestine’ in prison, and not even draw our flag. Our cells were searched three times a day. Two prison wardens passed by our rooms every 30 minutes to check what we talked or wrote about. One time, Iman Ali, another prisoner, was caught with drawings of Palestine. She was forced to tear them up.”

Ghaliz expressed hope that one day the prisoners’ institutions and human rights organizations will take an interest in the magazine, saying, “They should care about it. Is it not enough that the magazine is handwritten by the prisoners themselves, highlighting their daily suffering? This magazine shows that they can imprison our bodies but not our souls. The magazine is very important to us because, despite all the hardships we faced, we continued writing.”

Tasnim Halabi, the 17-year-old editor, said that the magazine contained several sections, including one on the lives of the prisoners, as well as sections on culture, religion and public information. “At first, we did not write about ourselves for fear of getting caught, but later we started doing just that. We used to gather pencils whenever we appeared before the Israeli courts,” Halabi told Al-Monitor.

Halabi was arrested over an attempted stabbing at the Beit ‘Ur checkpoint in Ramallah in April 2016 and was released on May 3, 2017.

She said the worst part was the beginning, the arrest, explaining that she and a friend were beaten by investigators, transported from the prison to the court with their hands and feet tied, with all kind of insults shouted at them.

She added that a Palestinian teacher from Jaffa who used to come to the prison every month to teach used to bring papers with her. But she stopped visiting at the end of 2016.

Qa’adan, the only adult on the team, was arrested five times by the Israeli occupation forces. The first time was in 1999, and she was detained for 37 days, during which she was tortured and interrogated about running the Jenin-based Al-Baraa Association for Muslim Girls, which is said to support terror. Qa’adan denied the terror claims and said that Al-Baraa merely supports the families of martyrs and prisoners and spreads Quran teachings.

Now out of jail, Qa’adan is teaching with a masters program in women’s studies and development at An-Najah University in Nablus and is active in defending the rights of female Palestinian prisoners.

“I went to several institutions interested in prisoners' issues, but none wanted to take on publication of the magazine. If the magazine were invested in properly and highlighted the lives of prisoners, it would have a big impact,” she said.

Abdul-Nasser Farwana, who heads the studies and documentation department at the Palestinian Prisoners' Affairs Authority, told Al-Monitor, “This magazine is a very positive step in highlighting, albeit very simply, the suffering of women prisoners in Israeli jails. It is important to have someone writing from inside the Israeli prisons to tell the world about these young girls.”

He stressed that such projects could galvanize the Arab and international community into pressuring the Israeli forces to better treat their prisoners.