Home for a day: Palestinian diaspora reconnects with motherland

A project run by Ziad Bakri in Palestine aims to reconnect Palestinians in the diaspora with their family's history by visiting the homes their relatives left in 1948. 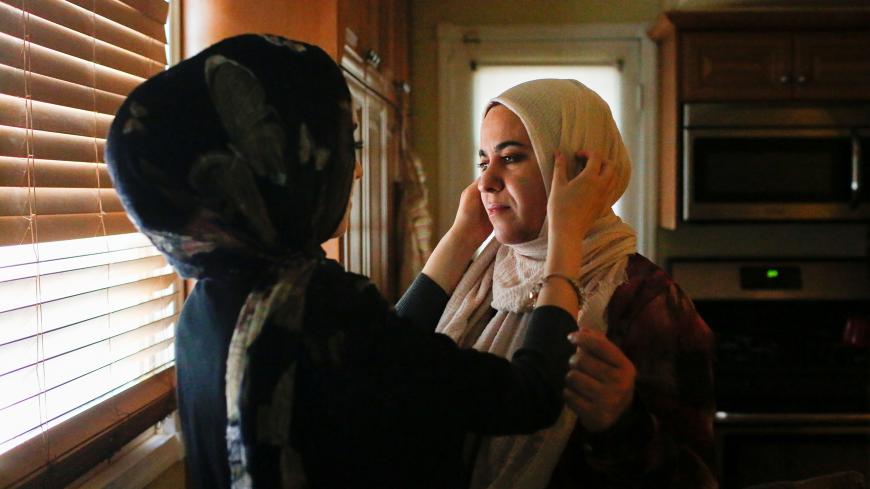 Nevien Shehadeh, 19, a Palestinian American, adjusts the headscarf of her mother, Wisal, before they depart their home to take part in prayers and celebrate the Muslim holiday Eid al-Fitr in Staten Island, New York, June 25, 2017. - REUTERS/Gabriela Bhaskar

Maher Shamma, who was born in Yarmouk refugee camp in southern Damascus and grew up in the United States, has held onto a map of his family house in Acre, a historical port city in northern Israel, that his uncle drew in 1948. To Shamma, the map is a symbol of his roots and his homeland.

It was this map that enabled Shamma, 57, to visit his family’s home this summer, with the help of a project called We Were and We Are Still. Tarek Bakri, a 31-year-old researcher from Jerusalem, has reconnected dozens of Palestinians abroad with their towns and villages of origin and with their family homes.

Once he received Shamma’s map, Bakri researched the Acre maps from the British Mandate and compared them to Shamma’s hand-drawn map in search of the house. Despite never having visited Acre, Shamma seemed to know the roads like the back of his hand. Over the years, his uncle, who had left Acre at the age of 26, had described the town and the neighborhood, and the house that was surrounded by 24 cypress trees.

During his visit to the house, which once belonged to his grandfather, a Palestinian woman approached Shamma and told him that only one family with the last name of Shamma had remained in Acre after 1948. Shamma took their address and visited them before returning to the United States, carrying with him sweet memories of his family’s old home, now a nursery run by the Israeli Ministry of Education, and newfound distant relatives.

Bakri also organized a visit for Zeina, a Canadian citizen, who visited Acre on July 26 to get married in front of her grandfather’s old home there, which her father had left in 1948 when he was only 6 years old.

Bakri coordinated with the local authorities and wedding planner to end the zaffa — a traditional Palestinian wedding march with drums, bagpipes and belly dancers, that took the bride all over town — in front of the house.

Zeina stayed in contact with her father during her stay with his relatives whom he hadn't seen in years, and took pictures of all the places she visited. “It was the happiest day of my life,” she said in the video of the visit posted by Bakri. “This felt like a dream. I feel like I have accomplished the impossible.”

Bakri came up with the idea for the project in 2013, when he became interested in learning about the history of the houses that were abandoned by Palestinian families during and after what Palestinians call the Nakba (Catastrophe) in 1948, which marks the establishment of Israel. “At first I would visit my friends' houses because I was allowed to move inside [Israel]. I then started documenting abandoned and destroyed villages — not like organizations do, but rather by conveying the story of a certain place by telling a refugee's personal story,” he told Al-Monitor.

Palestinians abroad approach Bakri through his Facebook page or during his travels in the region. They provide maps or old pictures of their family homes and nearby locations, so that Bakri can either send them recent photos of the homes or coordinate a visit.

Bakri said that he never visits the locations beforehand if the original owner is to come and visit. He waits for them to arrive so they can take the trip together. “I always feel as if I were the one finding my own home. I get the same feelings of sadness, anger and joy, all at once,” he added.

Through the project, Bakri aims to create a connection between Palestinians abroad and their family's places of birth, and, at the same time, introduce to others the history of each home and land.

Bakri makes a living as a freelance researcher for cultural and educational institutions; he does not accept payment for his work with the project.

After Zeina’s story went viral, Bakri received over 70 requests from Palestinians in the diaspora, who asked for help to find and visit their family homes. To cope with the demand, Bakri is currently recruiting and training a team of 15 young men and women.

Bakri recalls the time he took Halima Khaddash, 83, who lives in the Jalazone refugee camp in the northern West Bank, to her childhood home near Jaffa. Ziad Khaddash, Halima’s nephew, told Al-Monitor, “I would always tease my aunt, saying we would take her back to Beit Nabala, and she would tell me that she hadn’t visited ever since she left in 1948 at the age of 13.”

He contacted Bakri to make his aunt’s wish come true. Bakri arranged for the visit and took both in his own car to Beit Nabala, where they looked for the house which she said was near the four wells in the center of the village.

They then took her to the beach in Jaffa, an ancient port city on the Mediterranean Sea, where she once played as a child when her brother was treated in a hospital there — a memory that has stayed with her for decades.

Ziad Kaddash, who is a published author, said the visit had greatly affected his aunt, and that all she now talks about was the village she had left behind 70 years ago.

Kaddash said he believes in the importance of Bakri's work in keeping the dreams of Palestinians in the diaspora alive and encouraging them to return to their homeland. He said that Bakri should receive moral and financial support for his initiative, but that the initiative should not turn into an organization “so it would not lose its true essence.”