Few Palestinian institutions and individuals are working on preserving the memories and stories of refugees who lived through the Nakba in 1948, in the absence of an official national project. 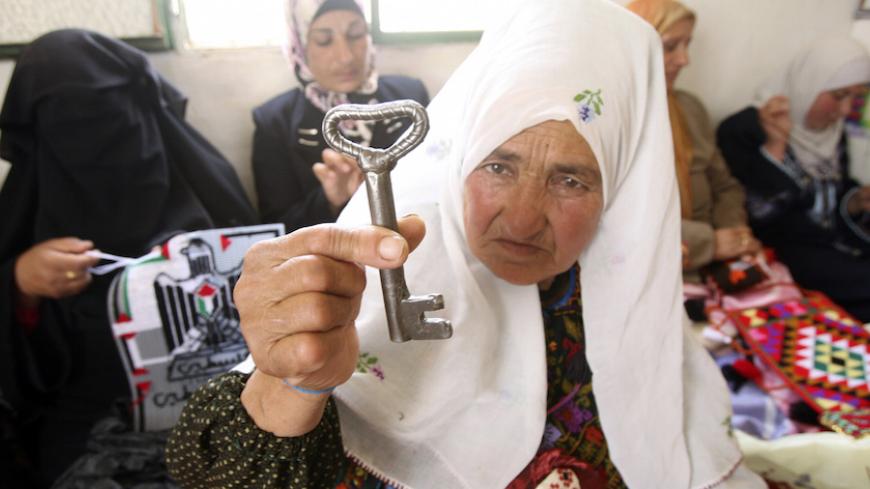 A Palestinian woman holds a key, symbolizing the keys to the homes the Palestinians were forced to leave in 1948, near Hebron, May 16, 2009. - REUTERS/Nayef Hashlamoun

RAMALLAH, West Bank — During an interview about her displacement from her hometown Lifta, west of Jerusalem, Khadija said, “I love this girl … I will give her the dress,” as she pointed to her granddaughter Iman who fetched a dress that Khadija has kept for 70 years, as if it were her most expensive belonging.

When Al-Monitor asked her why she chose to give the dress to Iman, she answered, “Because she knows how valuable it is and she can preserve it.”

Khadija, 76, said that her dress represents the hometown that she abandoned in 1948 after Israel's occupation of historic Palestine. She recounts dozens of stories about the village, its history and the residents' customs. Whenever she misses a detail, Iman reminds her of it.

Khadija is one of the 800,000 refugees who had to leave their villages and towns during the 1948 war, in what has become known as the Nakba, or catastrophe. They have been waiting to return home since then. The stories the displaced tell their children and grandchildren are the only consolation they have; they cannot but bequeath to them a memory that has burdened their souls and hearts for 67 years.

Khadija and her family now live in al-Bireh, a city in the center of the West Bank. She worries that she might face the same fate as her father, her mother and older sister, who died before they could return home. But whenever she sees Iman and her siblings, she's hopeful. “If we do not return, our grandchildren will,” she said.

Ahmed Ismail al-Aswad, who hails from the village of Kafr Ana near the city of Jaffa, lives in the Balata refugee camp east of Nablus. Aswad vividly remembers Kafr Ana; he was 13 when he was displaced from it.

Aswad, 81, has 16 children, and he hopes that they will fight for the right of return by preserving the memories he passes onto them. “We will return to [our] country. I don't know when precisely, but the return is drawing near, and even if I'm not destined to return, my son will go back to his grandfather's house,” he told Al-Monitor.

To the question whether his son knows the location of the house, Aswad said, “Yes, I have the key to the house. I managed to visit it years ago and I took him with me and told him that this is [his] legacy.”

Aswad is one of the oldest in the Balata refugee camp who left their hometowns during the Nakba, and one of the few still alive. His memory is good and he has been passing on what he recalls to his children and grandchildren.

However, these individual efforts are not enough to preserve the history of an entire displaced population that is dispersed both at home and abroad.

Al-Monitor asked the director of the Yafa Cultural Center in Balata refugee camp, Fayez Arafat, what options the refugees have to preserve the memory of the Nakba experience. He expressed concern over the firsthand accounts becoming more scarce as time passes.

“We are racing against time to document the stories of refugees who lived through the Nakba — not the second generation, whose stories are acquired from their parents and may lack certain details,” Arafat said.

According to Arafat, the documentation process has encountered many challenges, especially given that most of those who lived through the Nakba have died, while quite a few suffer from Alzheimer's disease.

Arafat and his team are working on documenting the stories of older refugees in sound and image. He said that the center fully documented the stories of 24 refugees from the Balata refugee camp; this project took two years. However, only one of the 24 refugees who was interviewed in 2000 is still alive today.

Arafat said that the stories told by those refugees are the guarantee to return. “The international community does not support the right of return, and people [who lived through the Nakba] are dying. But this story should remain [part of the youth] so that they get attached to it and inherit the right of return as an idea of ​​struggle as well.”

But he doesn't believe this is sufficient, as it requires a coordinated effort by the Palestinian Authority, the PLO and all other parties to the conflict to fill the void of the absence of the deceased refugees.

Efforts in preserving the refugees’ stories are uncoordinated; some institutions work on documenting oral stories and visuals, while others collect stories from a limited geographic area, such as the Palestinian Museum. The museum was primarily tasked with “collecting stories of refugees at home and in the diaspora, and subsequently expanded to include the entire Palestinian history,” Rana al-Anani, who is in charge of the museum's public relations, told Al-Monitor.

Anani said, “Among the projects carried out by the museum is the Family Album project, which consists of a collection of images and narratives of Palestinian families. The images [make up] a digital album documenting the events before, during and after the Nakba.”

The museum's first project was an exhibition of belongings preserved for decades by 280 refugees from inside Palestine and the diaspora. Anani said that through these images the post-Nakba stories of the Palestinians are told.

Rana Zahir, a professor of Palestinian history at Birzeit University, told Al-Monitor that the Palestinian Nakba constitutes an existential crisis for the Palestinian people, and that the basis of this Nakba is the diaspora; Israel denied Palestinians their land and sought to deny their story as well.

Zahir, who has worked for years to preserve the oral history of the refugees in the camps, has great confidence in the new refugee generation. “I deal with the third generation of the Nakba, who grew up under political oblivion but still remembers,” he said.

Zahir believes that although there is no official national project outside the PLO, the representatives of Palestinians at home and in the diaspora, the independent efforts of institutions and individuals is important in maintaining the Palestinians' history.

But the challenge for the Palestinians, according to Zahir, is to use their stories — which are still alive in the consciousness of the refugees and all other Palestinians — to return home and be liberated.