Despite its acknowledged humanitarian responsibility toward the residents of Gaza, a ruling by the Israeli Supreme Court to allow five cancer-stricken relatives of Hamas members to travel for treatment is a notable exception to policy. 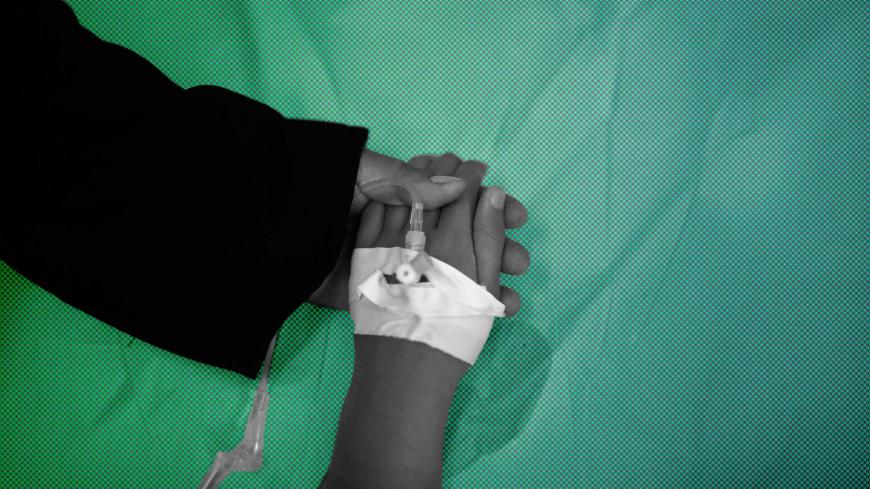 A cancer patient holds her mother's hand as she receives treatment in a hospital in Gaza City, Gaza, April 29, 2013. - REUTERS/Mohammed Salem

First, the good news: Israel’s Supreme Court ordered the government Aug. 26 to allow five critically ill Palestinian women from the Gaza Strip to leave immediately for life-saving treatment in an East Jerusalem hospital. Their only sin, according to the state’s affidavit, was being immediate relatives of a Hamas member. Originally, several human rights organizations (Gisha, Al-Mizan, Adalah and Physicians for Human Rights) petitioned the court on behalf of seven women banned from traveling for medical care in Israel. In the wake of the petition, the state admitted it had mistaken two of the plaintiffs for immediate relatives of Hamas members. The two plaintiffs were instructed to apply again for a permission to leave the Strip, but one was so drained that she gave up on re-starting the exhausting bureaucratic process of applying for permission to access critical medical care.

The head of the three-judge panel, Justice Uzi Vogelman, wrote of the decision to deny the women access to medical care in East Jerusalem, "It does not place appropriate weight on the value of human life nor on the absence of any involvement by said patient in illegal activities of any sort. Therefore, the decision does not fall within the bounds of reasonableness." His colleague Justice Isaac Amit concurred. “The decision to cause the death of a woman, pure and simple, for the sins of her brother or husband, contradicts the basic Jewish principle that each man shall die for his own sins,” he wrote.

In a civilized state, cancer patients would not have had to knock on the doors of the nation’s top court to obtain the medical treatment that every human being deserves. A state that occupies the lands of another people and violates their rights to freedom and equality while invoking the excuse of “national security” is not a civilized one. At one time, no one would have considered a Supreme Court decision to allow sick Palestinian women access to a Palestinian hospital in Jerusalem particularly unusual. These days, as government ministers and Knesset members, chief among them Justice Minister Ayelet Shaked advocate a wild campaign against the Supreme Court itself, any judicial criticism of a government decision is commendable.

Israel’s bleeding democracy had cause for modest celebration this week. As Mordechai Kremnitzer of the Israel Democracy Institute wrote, “The High Court of Justice saved itself, the security cabinet and all of us … from responsibility for the deaths of five Gaza women with cancer.”

And what has it done for thousands of other women, children and men locked in Gaza by Israel’s 11-year siege who require medical treatment, medicine and potable water? The justices were not wild about the January 2017 security cabinet decision to limit exit permits of certain sick Gazans to pressure Hamas for the return of Israeli captives and soldiers’ remains. Vogelman wrote explicitly that human life was more important. What, then, is the Supreme Court doing to save the lives of hundreds of Gaza residents?

Just three months ago, it rejected a petition by a human rights organization seeking to overturn the military rules of engagement that allow soldiers to use live fire against Palestinian protesters on the Gaza-Israel border. The justices accepted the government’s assurances that soldiers only use live fire in self-defense as a last resort when they feel their lives are at stake and reminded watchers that the court does not generally intervene in such matters.

Over the past years, the Supreme Court has repeatedly validated the government’s discriminatory policy designed to separate the Gaza Strip from the West Bank and obviously from Israel. This policy has many consequences, such as turning every Gazan requiring hospital care outside the Strip into a bargaining chip with Hamas. Since 2007, the court has rejected numerous petitions by Gazans seeking to exit the Strip through Israel’s Erez border crossing for medical care not available in Gaza — not to mention those seeking permission to leave for studies, training, family celebrations and funerals.

In 2008, the court ruled that given Israel’s 2005 pullout of troops and settlements from Gaza, it was no longer an occupying power there and therefore no longer responsible for the well-being and fate of Gaza residents. According to the court, Israel only bears "humanitarian" responsibility for the residents there by virtue of its control over the border crossings. And how does it fulfill these obligations? A December 2017 report by Gisha titled “We Saw no Reason to Intervene” analyzed 10 rulings issued since the start of the Israeli blockade. It found that the Supreme Court blindly accepted the position of the state in almost every case.

In this vague framework, the Supreme Court has granted the state almost unlimited discretion, leaving the rights of Gaza's residents with very weak protection. Having documented dozens of cases of Gazans denied permission to leave for medical care, Physicians for Human Rights concluded that this power was given to the Shin Bet, the domestic security agency. Its detailed 2008 report “Holding Health to Ransom” says that in some cases, Shin Bet operatives suggested that patients become regular informants or were offered money to rat out others. Patients who declined the offers were sent back home, even when they held valid exit permits.

The report’s authors noted that the Shin Bet does need to confront challenges to the security of the state and threats by Palestinian military group in Gaza against the lives of Israeli citizens and soldiers. Nonetheless, they insisted, the task does not justify the exploitation of patients’ distress. Physicians for Human Rights argued that exploiting the sick constitutes coercion forbidden under the Fourth Geneva Convention and violates the UN convention against torture and other inhumane treatment. The 2008 report was drafted 10 years ago, but members of the group insist that the phenomenon described therein has only increased.

In 2007, rejecting a petition by Gaza residents for permission to exit the enclave for medical treatment, the Supreme Court justices wrote, “We assume that the respondents’ approach will be humane, so that extremely severe cases, where withholding treatment would completely impair one’s life, will be taken into account.”

Sadly, the court’s latest ruling has defined the state with an exception to the rule.