Why Trump's plan to shut UNRWA is not the solution

Instead of cutting US funds for the UNRWA or allocating them to states, the Trump administration should encourage phasing out the agency while implementing a comprehensive settlement of the Palestinian refugee issue. 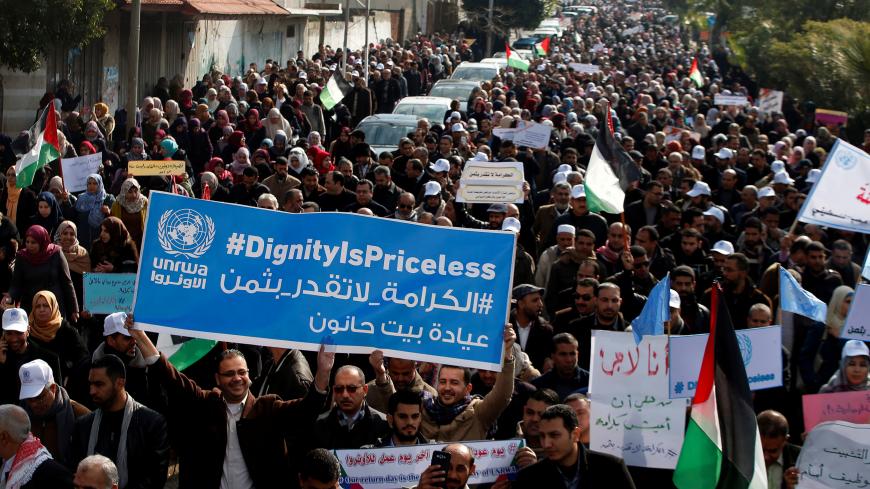 A Palestinian employee of the United Nations Relief and Works Agency holds aloft a sign during a protest against a US decision to cut aid to the agency, Gaza City, Gaza, Jan. 29, 2018. - REUTERS/Mohammed Salem

President Donald Trump claimed to have resolved the issue of Jerusalem’s future when he “took it off the table,” according to his disquieting declaration in January, by announcing US recognition of Jerusalem as the capital of Israel in December. With this matter supposedly behind him, Trump is now turning to the issue of the 1948 Palestinian refugees.

His envoy Jared Kushner is reportedly pushing to annul the refugee status of millions of Palestinians and shutter the UN agency tasked with their welfare. Just as US recognition of Jerusalem as Israel’s capital, even if justified historically, only served to move the issue to center stage and sever Palestinian ties with the US administration, the attempt to unilaterally shut down the United Nations Relief and Works Agency for Palestine Refugees in the Near East (UNRWA) will only serve to deepen the enmity between the Palestine Liberation Organization, the United States and Israel.

True, the UNRWA should no longer exist, and like many other organizations in the world, its continued operation stems mostly from inertia. It was founded in December 1949, the same month the UN General Assembly adopted Resolution 194 on resolving the plight of the Palestinian refugees displaced by the founding of Israel in 1948. It is the only UN organization devoted to dealing exclusively with only one group of people.

At the time, the Palestinians, as well as the Arab states, vehemently rejected Resolution 194 because it fails to reference the refugees’ “right of return,” resolving only that those “wishing” to return “should be permitted to do so.” It also stipulates the possibility of return on each refugee’s willingness to live in peace with his or her neighbors. It would take years for the Palestinians to decide that they should adopt the resolution, which they have since invoked as proof of their “right of return.” Israel then became the recalcitrant party, playing into the hands of its enemies.

Like many beginnings, the UNRWA’s was auspicious. The agency began operating in 1950. Well-intentioned people were hired to take care of some 750,000 Palestinians who registered as refugees, providing crucial aid to people who had lost all their property and were not allowed to return home. The agency focused on establishing temporary schools and clinics, but when UN experts sought to relocate the refugees to areas adjacent to Israel, they were met with strong opposition from the Palestinian leadership and most Arab states (except for Jordan). Arab policy was to perpetuate the refugees’ temporary status, which meant leaving them in camps, rather than accepting their exclusion by Israel.

In December 1950, the office of the United Nations High Commissioner for Refugees (UNHCR) was established to help millions of refugees in Europe in the aftermath of World War II. Although it would have been natural for the UNHCR to absorb the UNRWA after the former's original geographical restrictions were removed, the UNRWA remained independent. The Arabs and nonaligned nations continued to insist on preserving the agency as one uniquely devoted to Palestinians, so it therefore relies on donations rather than the UN budget for its operations.

The UNRWA's current budget stands at $1.25 billion, funded mainly by the European Union, Germany, Saudi Arabia, the United Kingdom and the United States. The agency operates within Palestinian communities in the West Bank, Lebanon and Jordan, employing some 30,000 people, most of them local Palestinians for whom it is a vital source of livelihood. Every few years, the UN General Assembly extends the UNRWA’s mandate. When the current one expires on June 30, 2020, it is likely to be extended again.

There has been no love lost between Israel and the UNRWA over the years. Nonetheless, the agency obviously helps Israel with residents of the areas it has occupied since 1967 by being responsible for the welfare of 75% of Gaza Strip Palestinians and 33% of those in the West Bank still living in refugee camps, according to the 2013 UNRWA figures. Since UNRWA schools teach the curriculum of the host territory, Israel is not depicted very favorably in the West Bank and Gaza curriculum, which is determined by the Palestinian Authority's Ministry of Education. Thus, Israel considers the UNRWA a necessary evil that employs teachers, some of whom are ideologically opposed to Israel. Hamas, for example, had in the past flatly rejected attempts by the UNRWA to include the Holocaust in the curriculum taught in Gaza schools.

The UNRWA has found itself adversely affected by the violent clashes between Israel and Hamas in Gaza, including being accused by Israel, justifiably or not, of collaborating with terrorists and allowing weapons to be concealed in its facilities. The main problem with its continued existence, however, is that it perpetuates the indefinite, multigenerational refugee status of millions.

The original 750,000 refugees have since spawned four generations, and the number of those defined as refugees has grown to 5 million, according to the agency's 2013 figures. There is no objective justification for this situation that makes life miserable for people born into what was originally thought to be temporary conditions and then dying there. Instead of helping ease the historical misery, the organization is helping to perpetuate it.

The Palestinian refugee problem can and should be resolved. To that end, the UNRWA should be shuttered, but not in the slam-bang manner advocated by Trump and his team — that is, by transferring UNRWA funds to the states where the refugees live. Do they really think the problem will be resolved if, instead of Palestinian teachers, Palestinian children are taught by local Syrian or Lebanese instructors? Who will get the budget currently allocated to Gaza? Hamas? Egypt wants nothing to do with the place, and Israel is not willing to re-enter the miserable quagmire. The Palestinians, who view the UNRWA as their ally, will vehemently oppose its dismantling. In addition, most UN member states will also reject such a proposal, as it would result in the collapse of Gaza's education and health care systems and deal a severe blow to Palestinians in the West Bank.

There is, however, another way. In the informal 2003 Geneva Initiative, of which I am a founder, Israel and the Palestinians agreed to gradually close the UNRWA over a five-year period and to annul Palestinian refugee status during that time. Those displaced from their homes in 1948 would receive compensation from an international fund, and a symbolic number of them would be repatriated to Israel. That is the most reasonable solution to this onerous problem.

Before the Trump team acts unilaterally and heavy-handedly to affect the future of the UNRWA and millions of refugees in ways harmful to all, they would do well to study solutions that stand a better chance of acceptance by the stakeholders.