What Israel wants from Qatar

By signing an arrangement with Hamas, and meeting Qataris, Israel opens the door for Qatari and Iranian influence in the Gaza Strip, and even in the West Bank. 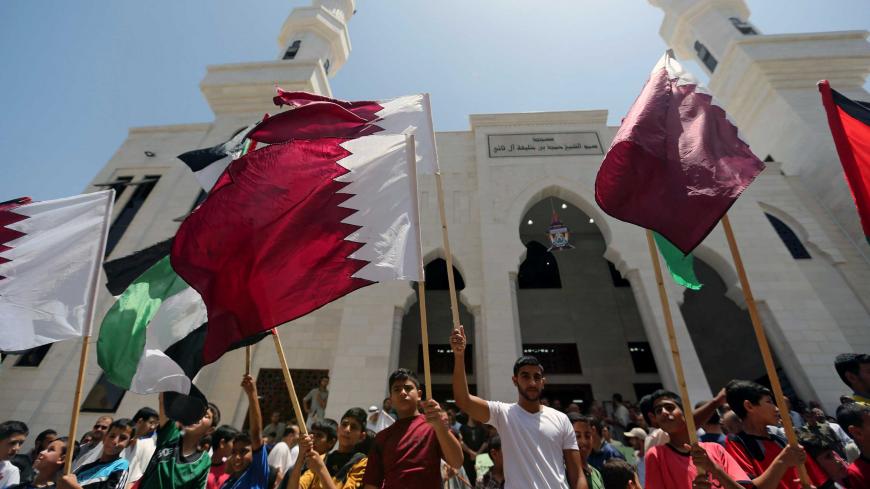 It’s too soon to tell whether the ongoing negotiations with Hamas will yield an agreement, or rather an "arrangement," between Israel and the organization that features prominently on the West’s list of terrorist groups. For now, the Israel-Hamas (indirect) contacts have resulted in a rare agreement between the radical Israeli right headed by Naftali Bennett, the leader of HaBayit HaYehudi, and the head of the center-left opposition, Knesset member Tzipi Livni. Bennett warned, “The terrorists will learn that terror pays, and Israel’s deterrence will be harmed.” Livni said the one thing Israel must not do is send a message to Hamas indicating that “we pay those using violence against us and shooting at us.”

Ismail Haniyeh, head of the Hamas political bureau, bolstered the criticism by these polar opposites in a sermon he delivered Aug. 21 in the Gaza Strip. “This is the result of your determined stand and your struggle,” the Palestinian leader told the Palestinians regarding the emerging deal. He then pledged, “The Palestinian resistance organizations will maintain their status as the shield and defenders of the Palestinian people.” Haniyeh insisted that his organization was not paying a political price for the deal that would bring humanitarian aid to Gaza, and declared that the “ultimate deal” US President Donald Trump promised to make between Israel and the Palestinians was “clinically dead.”

He was probably referring to Trump’s speech that same day in West Virginia, where Trump said that by recognizing Jerusalem as the capital of Israel he had taken the explosive issue off the negotiating table with the Palestinians and upped the price that Israel would have to pay as part of the “ultimate deal.” His envoy Jason Greenblatt tweeted in the same vein last week — in Hebrew, Arabic and English — “No one will be fully pleased with our proposal, but that is the way it must be if real peace is to be achieved. Peace can only succeed if it is based on realities."

Sadly, reality is such that true peace requires difficult ideological and political concessions, which neither the Palestinian resistance organizations nor the Israeli government are willing to make. To thwart a permanent, two-state solution to the Israeli-Palestinian conflict, Muslim zealots (Hamas) are willing to forego a cease-fire with Israel, and even to accept partial reconciliation with their sworn rival Fatah. With that same goal in mind, the Netanyahu government invited its sworn enemies to the negotiating table in order to reach a short-term cease-fire.

Among the participants in the negotiations conducted in Cairo last week on the Israel-Hamas “arrangement” was the deputy secretary-general of (Gaza-based) Islamic Jihad, Ziad al-Nahala. The senior representative of Iran’s long arm in the Israeli-occupied territories announced Aug. 20 that the Palestinian factions reached an agreement with Egypt.

In fact, a communique issued in May 2016 after a meeting between Nahala’s boss, Islamic Jihad leader Ramadan Abdullah Shalah, and Iran's Supreme Leader Ayatollah Ali Khamenei, said the two had discussed ways to strengthen “the Palestinian awakening” in the West Bank and Jerusalem and the steadfast stand of Gaza’s residents in the face of Israel’s siege. Shalah praised Iran for its support of the Palestinian people and for being “an element of peace and stability in the region.” He accused the Arab world of seeking economic and defense ties with Israel and of aligning itself with the Israelis in their confrontation with Iran.

The Jerusalem Center for Public Affairs, a conservative think tank founded by former Netanyahu adviser Dore Gold, wrote at the time that Iran’s rapprochement with Islamic Jihad should be seen in the context of its efforts at growing involvement in the Palestinian territories.

The current negotiations on a deal with Hamas have indeed upgraded the status of Qatar, Iran’s ally, in its struggle against Israel, Saudi Arabia and the United Emirates. On the one hand, Israel is preaching for tougher sanctions on Iran to rein in its meddling in Syria and Lebanon. On the other hand, Israel is opening the gates of Gaza to Iran, which also has its eyes on the West Bank and Jerusalem.

According to an Aug. 16 report on Channel 10 News, which has not been denied, Defense Minister Avigdor Liberman met secretly with Qatari envoy Muhammad al-Amadi on June 22 in Cyprus to discuss a cease-fire with Gaza and the issue of the remains of Israeli civilians and soldiers held by Hamas. A year earlier, when leading Arab states severed ties with Qatar citing its support for terrorism in the region, that same Liberman said, “There is no doubt this opens many possibilities for collaboration in the fight against terror.” Also in June 2017, while on a visit to Moscow, Qatari Foreign Minister Mohammed bin Abdulrahman Al Thani labeled Hamas “a legitimate resistance movement.”

Israel’s recent courtship of Qatar has paved the wealthy emirate’s way to Washington, which only a year ago took a stand at Saudi Arabia’s side against the Qataris. In June, a US delegation led by Trump’s son-in-law and special envoy Jared Kushner visited Doha to ask the Qataris for financial help in rebuilding the Gaza Strip. UN envoy Nickolay Mladenov also took the trouble to fly to Doha to scrounge several hundred million dollars for humanitarian projects in Gaza and salaries for government officials there.

With one hand, Israel’s government cracks down on European-funded human rights groups and pushes the US president to abrogate his country’s nuclear deal with Iran. With the other hand, it draws up an agreement with terrorist organizations funded by Iran and Qatar that will sink all prospects for real peace with the Palestinians.

The arrows slung at the deal with Hamas missed their primary target. At this point, there is no telling how long this “arrangement” will last and provide a respite to Israel’s weary Gaza border communities and to the suffering residents of Gaza. What is clear is that negotiations on the Israel-Hamas deal have resulted in “an arrangement” solidifying the influence of the two biggest state sponsors of terrorism in the Middle East on the balance of power in the West Bank and the Gaza Strip, and perhaps the entire region.