Israeli bill aims to crack down on those hiring prostitutes

Politicians from both right and left supported the bill of Justice Minister Ayelet Shaked to fine those who hire prostitutes. 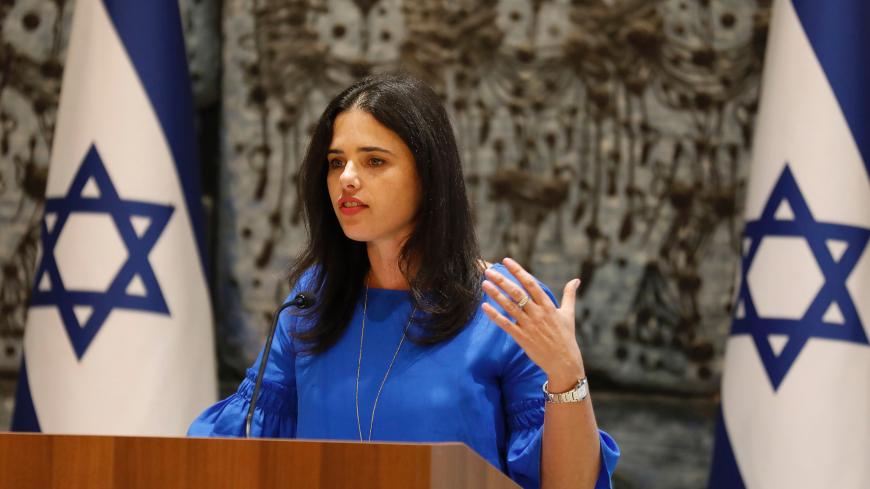 It is not an exaggeration to use the word “historic” when describing the bill outlawing payment for a prostitute’s services in Israel; the bill was passed on Aug. 5 by the Ministerial Committee for Legislation, ahead of a vote in the Knesset plenum. According to the bill, a fine of 1,500 shekels ($400)  will be imposed for the first offense of paying for prostitution services, and 3,000 shekels for a repeat fine within three years. In addition, if a person receiving such a fine will turn to the courts and it turns out that he did commit the offense, the judges can increase the fine up to 75,300 shekels.

The proposed law also determines that a significant budget of 105 million shekels ($28.5 million) from governmental apparatuses will be allocated to rehabilitate women engaged in prostitution as part of the system-wide action plan.

This is a true revolution because after years of attempts — mainly on the part of female Knesset members — to pass laws that would significantly reduce the use of prostitution services in Israel and make paying for it illegal, a great victory has been scored in this Sisyphean task. Unfortunately, this achievement was overshadowed by the Nationality Law that dominated the public agenda, even though the anti-prostitution law is expected to make broad, historic changes.

Justice Minister Ayelet Shaked of HaBayit HaYehudi, who also serves as chairperson of the Ministerial Committee for Legislation, was the one to initiate the bill and push for its approval. This was an unusual step to take in the current period, when the Knesset is on its summer break. The reason she did this is because Shaked hopes to have the law passed in its first reading (out of a necessary three), immediately when the Knesset reconvenes on Oct. 14. This way, if for any reason elections should be moved up (a decision that could be taken after the Knesset reconvenes), the bill will not be shelved; instead, the legislation process can continue immediately after the elections.

“The government is sending a clear message today to clients of prostitution: Trafficking in women and use of the services of a prostitute are unacceptable in every way,” Shaked declared after the bill was approved in the committee. The justice minister proved her impressive political abilities in this case, as she also does when promoting her agenda in the High Court of Justice and in political issues such as the Nationality Law. The difference is that this time, the flag she raises has earned almost wall-to-wall support in the Knesset.

This bill was also promoted by Minister of Public Security Gilad Erdan of Likud, who worked in cooperation with Shaked. When two such senior ministers lead a bill that is widely supported, the odds are high that the bill will become law.

A group of female Knesset members are also partner to Shaked’s achievement, from right to left; these are women who have been active for years in promoting legislation against clients of prostitution. They include Shuli Moalem-Refaeli (HaBayit HaYehudi), Aliza Lavie (Yesh Atid), Shelly Yachimovich (Zionist Camp) and former Meretz chairperson Zehava Gal-On, who put this bill on the top of her priority list as leader of the party.

This group of female Knesset members adopted and led the approach that women in the sex trade are victims; therefore, the ones who should be punished are those who use their prostitution services. Clients who use prostitution services serve to grease the wheels of the sex trade in Israel, an industry that is estimated to involve around 1.2 billion shekels ($330 million) a year. Shaked joined this approach and gave the bill an important push, as she is a central and very powerful figure in the government.

According to the experience of other countries headed by Sweden, the bill that was approved on Sunday in Israel is the basis of a just and progressive law that can significantly reduce prostitution.

In 1999, Sweden was the first state to adopt legislation that incriminates clients of prostitution. Statistics show that the number of women dealing with prostitution in the country was reduced by about two-thirds, and no new women entered the field. Over the years, additional countries, including Norway, France and Ireland, adopted this model. Female Knesset members in Israel have tried to promote the Swedish law as a model to cut down on prostitution.

Knesset member Yachimovich, one of the leading old-timers in this struggle, praised the fact that the committee passed the bill and wrote, “This is the beginning of the end of the era in which women can be trafficked, with great damage inflicted on their freedom, their bodies and their souls.” According to Yachimovich, “Transferring the responsibility to those who carry out harsh acts on the bodies of weakened women is both a values-based as well as practical statement.” Yachimovich generously praised Shaked and Erdan, setting aside their political differences.

According to Israeli law, prostitution itself is not a criminal offense; only activities connected to prostitution, like pimping and advertising prostitution services, are defined as criminal. According to estimates of the Welfare Ministry and organizations fighting against the sex trade, there are about 14,000 people in the sex trade, most of them women — about 3,000 of them are minors.

Only in recent years did the Ministry of Labor and Social Affairs conduct a comprehensive study of the phenomenon, which revealed that economic distress is the main reason that women join the circle of prostitution. This is also the reason that many of them find it difficult to leave. It was astonishing to hear that this was the first time in which the state thoroughly examined the scope and characteristics of prostitution in Israel.

According to journalist Vered Lee from Haaretz newspaper, who tracks the phenomenon in Israel, the sex industry in Israel has changed in recent years. At the beginning of the 21st century, the industry was based on trafficking in women from the former Soviet Union. Today it is based on thousands of Israeli women, the majority of whom are mothers; also involved are at-risk young girls or transgender women.

The war against the sex trade turned into a women’s struggle. This is unjust, because what we face is a moral struggle for a better, more just society that protects its weak victims.

In 1998, a law was passed in Israel against sexual harassment. At the time it was viewed as a very progressive law, first by women, and only recently it became one of the factors that enabled the anti-sexual harassment “Me Too” movement in Israel. The 1998 law turned male sexual harassers into offenders under the law; this same outlook should be extended to prostitution clients. We are only at the beginning of the process, but even now we can be proud of the rare mobilization of activists from the entire political spectrum for one of the most important and just laws of recent years.