Israel shifts blame for prostitution from sex workers to clients

After years of promotion and preparation, Israel's new law criminalizing the consumption of prostitution has finally entered into force. 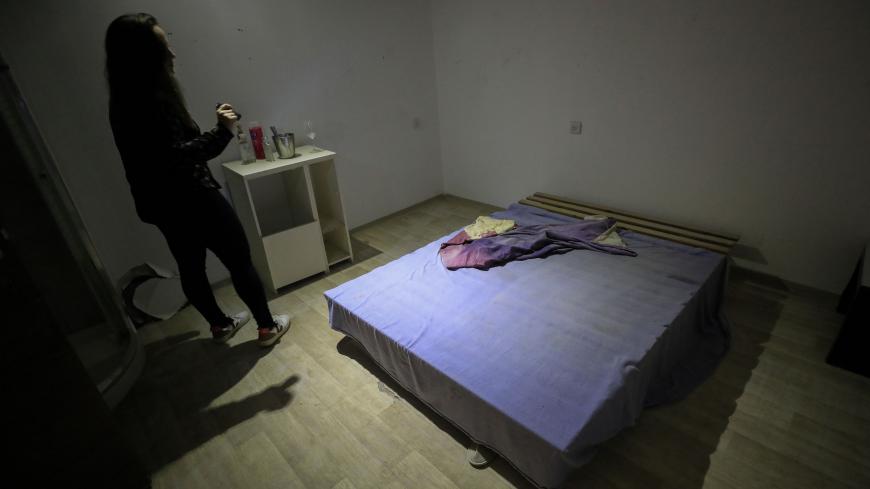 A woman visits a room in the underground premises of the former Pussycat strip club, which was turned into a community center and small museum, in the coastal Mediterranean city of Tel Aviv, March 5, 2020. - EMMANUEL DUNAND/AFP via Getty Images

Israel's landmark law against the consumption of prostitution goes into effect today, July 10, a year and a half after it was passed. “Women are not merchandise and their bodies are not available for rent to anyone willing to pay for the price,” tweeted Justice Minister Avi Nissenkorn of Blue and White this morning. His tweet came in response to several days of intense pressure to postpone the law’s implementation.

For the first time in Israel’s history, liability for prostitution lies with consumers. The police can now fine them thousands of shekels without punishing those who sell the services. The law also determines that in the event of multiple infringements, people hiring prostitutes could face criminal prosecution and that the fines would increase to tens of thousands of shekels.

To date, Israeli law has not treated prostitution as a crime unless it involved minors. Activities surrounding prostitution, including pimping and advertising sex services, were illegal. As a result, while pimps and the managers of brothels have been arrested and investigated, the actual consumers were never charged.

This law is historically significant in that it recognizes the basic immorality of exploiting prostitutes financially for purposes of sex, and that those who sell their bodies for a living are actually victims. It holds that it is the consumers who turn sex into a commodity and they should be punished for it.

This revolutionary law is an enormous victory after years of effort to pass laws that would reduce the phenomenon of prostitution and ban people from taking advantage of it. Were it not for the second wave of the novel coronavirus, the law going into effect today would have topped the headlines instead of being lost amid reports about economic collapse and hospitals yet again filling up with patients.

But even without media attention, the law is here to stay. It will remain in effect when the pandemic is over and result in real change by reducing prostitution significantly.

According to most estimates, there are about 12,000 people involved in the prostitution industry in Israel. Of them, some 95% are female and 5% are male, including about 1,100 girls and about 40 boys. As a whole, the industry generates about $1.3 billion per year.

Until 2016, Israel had never attempted to develop a systemic approach to reduce prostitution in the country. That year, the Ministry of Labor and Welfare conducted a comprehensive study of the phenomenon. It found that the face of Israel’s prostitution industry has changed over the last few years. In the early 2000s, it was comprised mostly of women from the former Soviet Union. Today, however, the industry involves thousands of Israelis, most of them mothers, at-risk teens or transgender women.

The report concluded that economic distress is the main reason women turn to prostitution. It is also the reason so many women have a hard time breaking free from it.

In 2018, a powerful coalition of men and women from all parties first formed in the Knesset to combat the phenomenon and made history.

Spearheading this effort was former Justice Minister Ayelet Shaked, who also served as chair of the Ministerial Committee for Legislation. She initiated the proposed legislation and pushed ahead its approval right before the Knesset was dissolved and new elections were announced.

Shaked recruited then-Minister of Internal Security Gilad Erdan, who was recently appointed Israel’s ambassador to the United Nation. Working together, the two of them did not relent until the law was passed. They had the backing of women Knesset members from all parties, including the religious ones. On the day that the law was approved, former Knesset member Shelly Yachimovich (Labor), who was at the forefront of the struggle, stated, “The war against prostitution is like a war to free the slaves.”

Along with the law, the government approved a program to rehabilitate people working in prostitution. A budget of 30 million shekels ($8.7 million) was dedicated to provide them with treatment and rehabilitation.

The law is based on the Nordic model, which puts the onus of responsibility on consumers of prostitution. In 1999, Sweden became the first country in the world to criminalize the patronage of prostitutes. Data collected in the ensuing years found that the number of women in the country who were engaged in prostitution dropped by about two-thirds and fewer new women entered the industry. The success of this model led other countries such as Norway, France and Ireland to adopt it. Over the next two decades, women’s rights organizations in Israel that followed developments in the international struggle against prostitution and a dedicated group of Knesset members tried to do the same, but found their efforts blocked.

Now it is up to the Justice and Public Security Ministries to enforce the law in the midst of the current political chaos and the pandemic. Much of the work will fall to the police, who will be expected to proactively pursue violators. Any consumer of such sexual services who is caught will receive a 2,000-shekel ($580) fine. The police will also set up a computer database of these consumers and anyone caught again will be fined twice as much. As noted, repeat offenders could face criminal charges as well.

Ayelet Dayan, who heads the Taskforce on Human Trafficking and Prostitution, said that the law already has had an impact in the two years since it was passed, even before it went into effect. She also said that there has already been a decline in prostitution and a rise in requests for rehabilitation, with more women wanting to breaking free of the cycle.

“This is a historic statement by the Israeli government,” she stated. “The exploitation of women as prostitutes is no longer acceptable.”

She explained, “The law is not focused exclusively on the consumers, who will for the first time bear responsibility for the harsh exploitation prevalent in the world of prostitution. It also addresses the women and other populations in that world. What the government is telling them is, ‘I see you, and I am extending a hand to pull you out of there.’”