A top Pentagon watchdog says between 4,000-6,000 Islamic State fighters remain in northeast Syria, far higher than the number cited by the Defense Department. 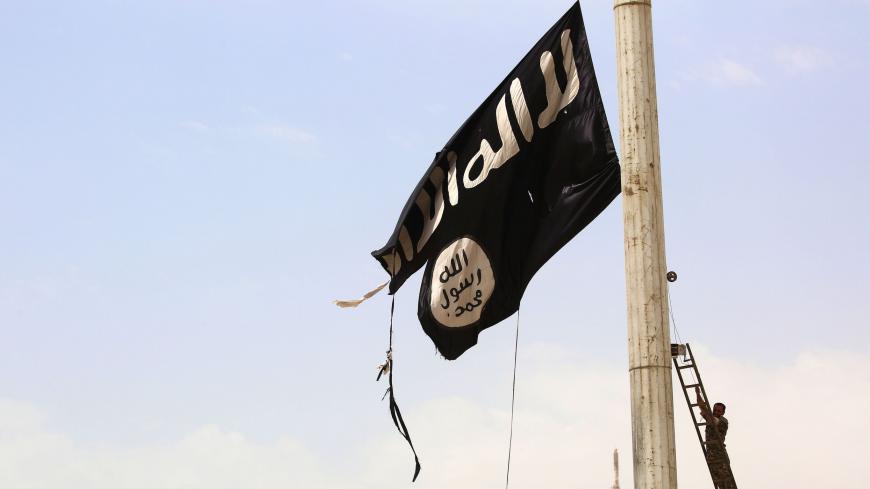 A member of the US-backed Syrian Democratic Forces, made up of an alliance of Arab and Kurdish fighters, removes an Islamic State group flag in the town of Tabqa, about 55 kilometers (35 miles) west of Raqqa city, on April 30, 2017, as they advance in their battle for the militant group's de facto capital. - GETTY/Delil Souleiman

The Pentagon has more Islamic State fighters left to defeat in Syria than it has previously acknowledged, according to a US government watchdog.

As US-backed forces begin targeting IS remnants near the Iraqi border, as many as 4,000 to 6,000 IS fighters remain in their former stronghold in northeastern Syria, a joint inspector general report to Congress on Monday revealed.

The figure, attributed to a Defense Intelligence Agency (DIA) assessment, would accord IS significantly more troop strength than the Pentagon has publicly acknowledged.

Pentagon officials estimated in December last year that as many as 2,000 IS fighters remained in Syria. The coalition has since stopped providing public estimates for IS remnants, but has not given a reason for halting estimates, even as it enters the final stage of so-called Operation Roundup that is aimed at clearing the city of Hajin near the border, where three divisions of Iraqi troops are holding a blocking position.

Defense Department spokesman Cmdr. Sean Robertson said DIA’s figure “speaks for itself” and in response to a question from Al-Monitor the Pentagon did not provide a reason for halting public estimates of IS fighters. US-led coalition spokesman Col. Thomas Veale told reporters in June that he had “nothing to add” to previous estimates that had ranged between 1,000 to 3,000 militants in Syria.

But the DIA assessment also suggests there are more IS fighters in Syria outside the northeast, suggesting the group may have migrated to other parts of the country as it faced bombardment from US troops, who are mostly stationed in the northeast. The DIA told the inspector general that as many as 13,100 to 14,500 IS fighters were left in all of Syria.

Syrian forces loyal to President Bashar al-Assad began advancing into the IS-controlled desert region of Suwayda this week, where the militant group has recently targeted the Druze minority in a series of suicide bomb attacks. The Kurdish-led People’s Protection Units — known as the YPG — which receive US weapons and air support, said in a statement this week that it would be ready to assist the surrounded Druze cities in the area.

Experts say US officials have closely watched large movements of IS fighters out of Raqqa and Yarmouk refugee camp that could have helped intelligence agencies assess the remaining number of militants.

“I cannot imagine for a moment that there hasn’t been some very tight surveillance when [IS] fighters moved as groups,” said Donatella Rovera, a senior crisis response adviser for Amnesty International, who recently returned from US-liberated areas in Syria. But, she cautioned, “I don’t really think we know how many people there are.”

DIA also told the inspector general that counts of IS strength could fluctuate as military operations against the group continue. But the higher number of fighters could provide insight into the Pentagon’s reluctance to declare victory in Syria, even as US President Donald Trump promised in March to bring home 2,200 US troops from Syria “very soon.”

“I don't declare victory until it is in the rearview mirror,” Defense Secretary Jim Mattis said on Tuesday. “As we close in, what happens with [IS] is that they become more concentrated so there is hard fighting ahead. That's all there is to it.”