Some factions of the Popular Mobilization Units have started to withdraw from Sunni areas, which they helped to liberate, in a step aimed at avoiding sectarian conflicts. 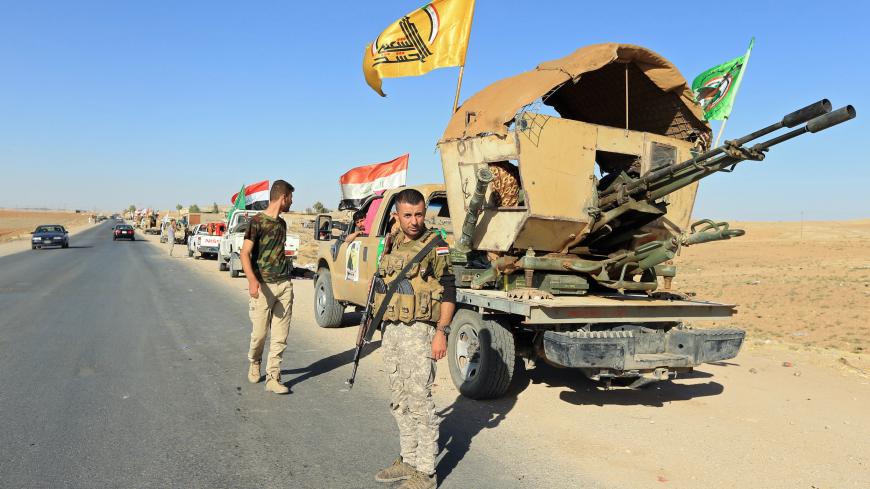 On Aug. 18, PMU factions withdrew from areas in the north of the Baiji district in the Salahuddin province, where they were positioned. This move comes days after Abadi ordered the head of the provincial council to remove the PMU from the area.

The withdrawal of the PMU was not limited to Baiji. On Aug. 19, PMU sources confirmed to Al-Monitor “the withdrawal of PMU factions from al-Siniya city, west of the [Salahuddin] province.”

Before Baiji, the PMU had retreated from the Ninevah province. Ahmed al-Jubouri, a member of parliament representing the province, considered the move “a political decision” that will not yield positive results on the general situation in the province.

After the document was issued, dozens of civilians protested Aug. 14 in front of the Ninevah provincial council building in Mosul demanding that the PMU remain in the city. But the protests did not achieve any results, as the PMU retreated from the city.

The decision to withdraw the PMU was not only a security decision, but also a political one, as there are fears that clashes or tensions may arise between the PMU and the residents of the Sunni areas.

On Aug. 18, a motorcycle bomb exploded in Ninevah, killing three members of the PMU. It seems the attack was a message to the PMU in case they refused to withdraw.

The PMU had denied news about retreating. However, Abu Mousa al-Salmawi, the commander of PMU operations in the east in Ninevah, had asked Abadi and PMU Deputy Chief Abu Mahdi al-Mohandis to reconsider the decision to withdraw, proving that the talks are serious.

In this context, official PMU spokesman Ahmed al-Assadi told Al-Monitor, “The PMU did not withdraw from Sunni areas, and specifically not from Ninevah. However, they redeployed in areas that fall under their responsibilities.”

Assadi added, “The PMU were deployed in most areas of the Ninevah province, which is why they were asked to return to the areas they were [originally] assigned to protect and leave other areas where the army and police are in charge.”

For his part, a prominent PMU source disagreed with Assadi. He told Al-Monitor on condition of anonymity, “The PMU leadership is aware that Abadi had promised the Americans and Sunnis to remove the PMU from Sunni areas.”

The source added, “Abadi also promised Americans and Sunnis over two years ago to withdraw from Sunni areas. But he will not be able to do so, because we are not a mere brigade or a small force, rather we are a government body that has its laws and its military and popular force.”

The PMU leaders are well-aware that their presence in Sunni areas will not last long after eliminating the Islamic State (IS), as some citizens in those areas still reject the PMU.

The Anbar province is the only Sunni area where the PMU has yet to retreat. Eventually, though, the PMU will withdraw from there.

Ahmad al-Abyad, a former researcher at the Academic Research Center, said Abadi indeed decided to remove the PMU from Sunni areas because of foreign “pressure.”

Abyad told Al-Monitor, “Abadi will not be prime minister if he does not withdraw the PMU from Sunni areas and force them to hand their weapons over to the army. Abadi agreed on this with the US and his foreign supporters.”

He added, “Iran will also agree to withdraw the PMU, which are loyal to it, from these areas as a result of international and local Iraqi pressure.”

The PMU withdrawal may leave a security void in the areas they controlled, but their presence may also create more problems, as there are increasing talks about violations PMU members are committing against the citizens of Sunni areas. This has caused trust issues between the two parties.

The Iraqi government does not want the PMU to remain in the Sunni areas, while at the same time it wants them to stay close to these areas. In light of the new PMU positions, there are expectations that Camp Speicher in Salahuddin province will be the new base for the PMU after they retreat from the areas they once controlled.