Ankara and Baghdad have announced plans to open a second border crossing, tightening links between the two countries. 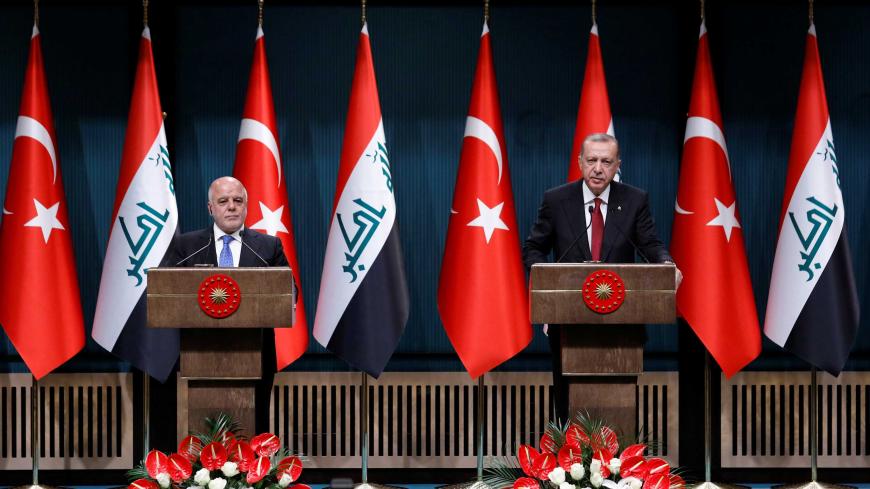 Turkish President Recep Tayyip Erdogan and Iraqi Prime Minister Haider al-Abadi reiterated their commitment to creating a second border crossing linking their two countries today following wide-ranging talks in Ankara. Speaking at a news conference, both leaders underlined the importance of what Abadi called a “direct link” with Turkey. It would be established in addition to an existing border gate that has been run by the Kurdistan Regional Government since the fall of Saddam Hussain in 2003.

“Concerning the border crossing between the two countries in Fish Kabur, we are working on it. It is important for us for it to be a direct crossing,” Abadi said. His words suggest that he views the Iraqi Kurdistan Region as separate from Iraq, even though he viscerally opposed the Iraqi Kurds' ill-fated referendum on independence that was held and overwhelmingly approved last fall.

Wedged between Turkey, Iraq and Syria, Fish Khabur is of strategic significance all around. It is where a pipeline carrying Iraqi Kurdish crude to export terminals in Turkey’s southern Mediterranean port of Ceyhan is located.

Erdogan said, “The border crossing will benefit both Iraq and our country. I believe necessary steps will be taken in this regard.” He added, “Commerce between Turkey and Iraq was $11 billion in 2017. This is not enough.”

Turkey has long entertained the idea of creating links to Mosul and onward that would bypass the Kurds, part of a strategy of diversifying access to a vital market for Turkish exports and hemming in Kurdish nationalist aspirations by creating a physical wedge between Iraq and Syria’s Kurds. Turkey, along with Iran, joined Abadi in opposing the Sept. 25 referendum on Kurdish independence.

Promoting trade ties with neighboring Iraq has gained added urgency as Turkey grapples with a ballooning currency crisis triggered by Erdogan’s refusal to increase interest rates and amplified by US sanctions imposed on Ankara over the continued detention of American pastor Andrew Brunson.

Turkish contractors riding on cheap credit have driven growth at home in line with Erdogan’s economic vision. They now hope to cash in on the reconstruction of Mosul and other cities destroyed in the conflict with the Islamic State. Turkey committed $5 billion in lines of credit for post-war reconstruction during a donor’s conference held in Kuwait earlier this year.

Abadi expressed solidarity with Ankara, saying, “We are with Turkey in its monetary crisis. Through cooperation, we can overcome many of the challenges facing us.”

Bilal Wahab, a senior fellow at the Washington Institute for Near East Policy, said, “A new border crossing makes commercial and political sense for both sides, particularly in light of US sanctions on Iran.” Wahab told Al-Monitor, “Turkey can help make up the short fall in Iranian goods that would otherwise fill Iraqi needs. It’s a win-win.”

Turkey renewed pledges to provide Iraq with its full share of water from the Euphrates and Tigris rivers, a source of abiding friction between the two neighbors.

The leaders also talked about refurbishing a dual oil pipeline running from the Kirkuk oil fields to Ceyhan. Baghdad sealed the line after driving Kurdish peshmerga forces out of Kirkuk in October 2017, part of a broader Iranian-backed offensive to reclaim so-called disputed territories from the Kurds in the wake of the referendum.

Erdogan meanwhile renewed calls for Iraq to help prevent attacks against Turkey by Kurdistan Workers Party (PKK) rebels operating from mountain bases within Iraq’s borders. Turkey maintains several thousand troops in Kurdish-controlled areas to hem in the PKK and the sides continue to clash in the remote mountain area where the Turkish, Iranian and Iraqi borders converge. Turkey also continues to deploy an unspecified number of special operations forces in Bashiqa near Mosul. Baghdad has repeatedly called for their withdrawal.