Congress ratchets up pressure on Trump, Russia over Syria 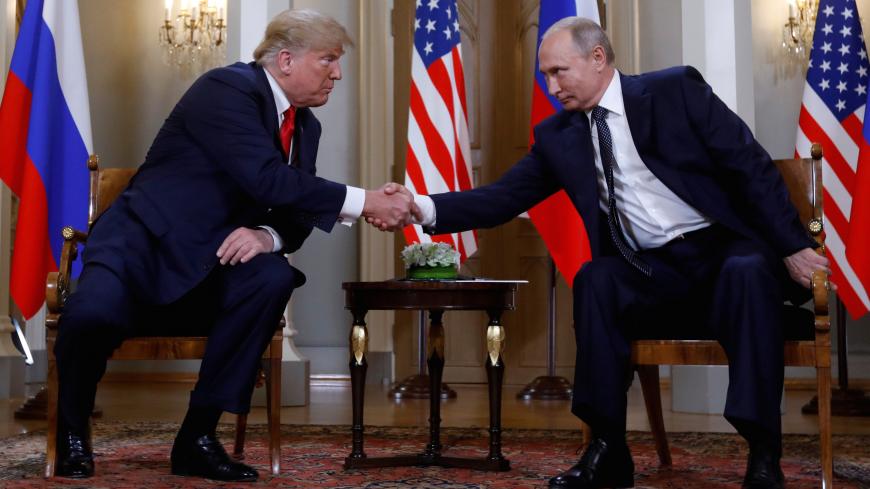 President Donald Trump used his controversial summit with Russian President Vladimir Putin in Finland last month to discuss Moscow’s role in facilitating the removal of Iranian forces from Syria. Putin reportedly told Trump that this would be a tough sell — and Congress agrees.

Now lawmakers are teeing up a new batch of wide-ranging Russia sanctions in a bill that highlights Moscow’s support for Iran and the Bashar al-Assad regime while repudiating Trump’s plan to cooperate with the Russians in Syria.

Building upon sanctions legislation Congress passed last year, the new bill requires the Trump administration to submit an assessment of whether Russia belongs on the State Department’s infamous state sponsors of terrorism list, in part because of its actions in Syria. The bill would also require a report on the feasibility of Moscow’s “willingness and capacity” to remove Iran from the war-torn country.

“I think the administration should speak to some of its own intelligence and State Department members who have seriously questioned the ability of Russia to just get Iran out at its whim,” Menendez, the top Democrat on the Senate Foreign Relations Committee, told Al-Monitor. “I don’t think that Iran is simply an agent of Russia. I think they had an unholy marriage and now it would be very difficult to get Iran out just because Russia asked them to.”

Sen. Cory Gardner, R-Colo., one of the bill’s co-sponsors, also told Al-Monitor that he views the gambit to use Russia to drive a wedge between Assad and Iran as “aspirational.”

The new sanctions push reflects the bipartisan backlash against Trump’s cozy relationship with Putin and lawmakers’ inability to get details about the two leaders’ discussions at the Helsinki summit. The frustration was on full display during two simultaneous Senate hearings today as lawmakers grilled representatives from the State and Treasury departments over the Trump administration’s implementation of sanctions on Russia.

Congress is also seeking more clarity on the administration’s diplomatic strategy by asking for an extensive report on Moscow’s support for Assad and Iranian forces in Syria.

Specifically, the pending bill requires “an assessment of weapons, technologies and knowledge” that Russia has transferred to Assad, Iran or “Iran-aligned forces” such as Hezbollah “that threaten the security and qualitative military edge of Israel.” It also asks for “an assessment of the specific commitments” Russia has made to Israel regarding the occupied Golan Heights.

While the United States and Israel have pushed for the full removal of Iranian forces from Syria, Russia has reportedly agreed to keep Iran-backed forces about 60 miles from the Golan.

The report also takes aim at Russian mercenaries operating in Syria by requiring an assessment of whether “the presence of Russian forces and Russian contractors in Syria limits the options of the Government of Israel in taking steps to ensure its security from threats emanating” out of Syria. US forces clashed with Russian military contractors and other pro-Assad forces earlier this year.

Menendez and others also believe that Moscow’s support for Iranian, Assad regime and Hezbollah forces could constitute another reason for placing Moscow on the State Department’s state sponsors of terrorism list, which would result in even more stringent sanctions. Syria and Iran are already on the list alongside North Korea and Sudan.

While Menendez raised particular concerns over a March chemical weapons attack against a former Russian spy and his daughter in Britain, he also pointed to their involvement in Syria since 2015.

“It’s the totality of their actions … including what’s happened in Syria,” Menendez told Al-Monitor. “There’s a deeper set of circumstances that would clearly fall in line for Russia to be subject to that.”

Gardner has also called on the Trump administration to designate Russia as a state sponsor of terrorism.

In addition to the attack on British soil, the bill also points to Moscow’s successful efforts to water down the Organization for the Prohibition of Chemical Weapons’ (OPCW) mandate to apportion blame for chemical weapons attacks. It also accuses Russia of being “unwilling or incapable of compelling” the Assad regime to cease chemical weapons attacks. The bill would authorize the United States to provide $30 million in funding for the OPCW through 2023.

Menendez and other Democrats have also accused the Trump administration of failing to implement many provisions from the first round of sanctions Congress approved last year, including sanctions on individuals who aid the Assad regime in obtaining chemical and conventional weapons. But in a concurrent hearing, administration officials maintained that they have already made good use of those authorities.

“We used our Syria authorities to sanction Russia’s primary state-owned defense firm and its bank subsidiary for supplying Russian military equipment to the Assad regime, hindering the firm’s ability to receive payments from existing contracts with other countries,” Sigal Mandelker, the Treasury Department’s under secretary for terrorism and financial intelligence, testified before the Senate banking committee.