While the signing of the landmark legal convention on the Caspian Sea has exposed the Rouhani administration to criticism at home, the accord provides Iran with important advantages while leaving the door open for further talks on boundaries. 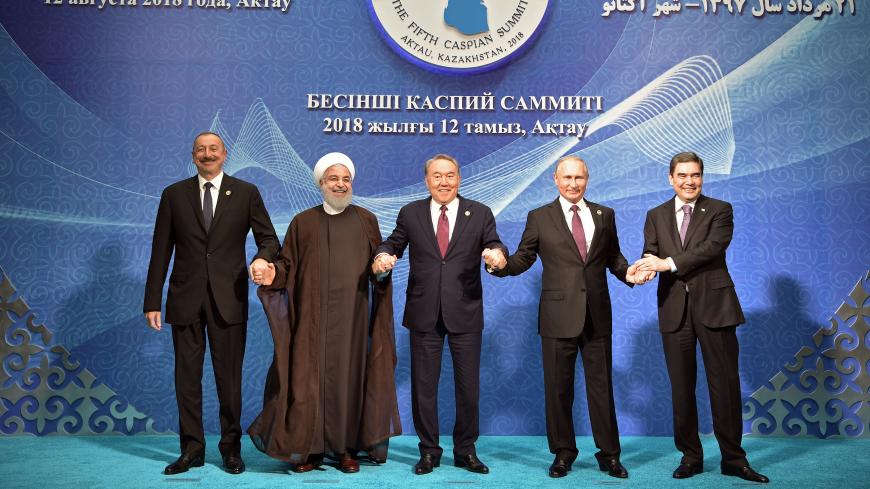 The Kazakh coastal city of Aktau hosted Aug. 12 the fifth summit of the five Caspian littoral states — Iran, Russia, Kazakhstan, Azerbaijan and Turkmenistan — on the legal status of the Caspian Sea. The presidents of the five countries signed a landmark convention on the legal status of the Caspian, ending 21 years of disagreements over how to coordinate their economic, political and security plans for the largest inland salt sea in the world. On the sidelines of the summit, six agreements were also signed on issues such as economic cooperation, transportation and fighting organized crime.

Although the five presidents at the summit praised the convention as a significant step in resolving longstanding disagreements and a prelude to further cooperation in the Caspian region, Iranian public opinion showed an overall negative reaction to the accord. Most of the criticisms were based on the claim that Iran has ceded its historical rights in the Caspian to its northern neighbors.

Debates over the issue intensified especially as Reformist parliament member Mahmoud Sadeghi speculated in a tweet that Iran’s share of the Caspian has been reduced from 50% to 11%, comparing the convention signed in Aktau with the 1828 Treaty of Turkmenchay, in which great swaths of Iran’s territory were ceded to Tsarist Russia. The tweet was followed by a wave of similar accusations against President Hassan Rouhani’s administration on Persian-language social media.

However, a great part of the controversy seems to be rooted in the false assumption that prior to the collapse of the Soviet Union in 1991, Tehran and Moscow had divided the Caspian on a 50-50 basis, and there were legal provisions for equal access to the sea. In fact, the rules governing activities in the Caspian before the Soviet collapse had been derived from the 1921 Russo-Persian Treaty of Friendship and the 1940 Treaty of Commerce and Navigation. However, none of those treaties contained an exact division of the seabed or surface, referring just to the joint usage of the Caspian Sea by the two sides. However, almost through the whole Soviet period, the Russians had the upper hand in the inland sea, limiting Iran to a restricted area adjacent to its coast.

When new states emerged at the Caspian basin after the collapse of the Soviet Union, the issue of access to the body of water became more complicated, especially given the significant amount of energy resources in the area and the desire of the newly independent states of Turkmenistan, Kazakhstan and Azerbaijan to exploit the resources as a means for their economic growth. Since 1996, the five littoral states started regular meetings at the level of foreign ministers and then the heads of government. However, Iran’s insistence on having at least a 20% share of the Caspian caused negotiations to hit a deadlock.

In parallel with the five-party format, Russia started separate talks with Kazakhstan and Azerbaijan on the status of the northern part of the sea. By 2003, the three sides managed to determine their shares of the body of water, resulting in the actual partition of over 60% of the Caspian. In the southern Caspian, however, disagreements continued between Iran, Turkmenistan and Azerbaijan, on some occasions giving rise to the specter of an open-armed clash between the sides. As the continuation of that situation would present a persistent threat of instability in Iran’s northern neighborhood, it could be argued that the convention signed in Aktau was a positive step, at least with reference to the elimination of that threat.

On the other hand, although the Aktau convention introduces general measures for resolving the legal issues, it stops short of clearly determining the share of each state of the seabed and surface, and these highly challenging issues have been left to be solved in separate agreements in the future. The first article of the convention also refers to the natural shape of Iran’s coasts, which has so far been assumed to potentially negatively affect Tehran’s claims to a bigger share of the sea. Indeed, the article states that “If the configuration of the coast puts a coastal State at a clear disadvantage in determining its internal waters, that will be taken into account” in determining the baselines. As such, Iran has avoided ceding any of its rights in the Caspian while gaining an effective bargaining chip for future negotiations.

Putting aside its legal aspects, the convention is also important for Iran from the security point of view. Article 3, which calls for the “non-presence in the Caspian Sea of armed forces not belonging to the Parties,” is an important security guarantee for Iran, which, along with Russia, has been concerned about potential US and NATO attempts to extend their reach to the Caspian region, thereby imposing increased pressures on both Tehran and Moscow. In fact, there were some reports recently that Kazakhstan was about to let the United States establish a military base on its Caspian coast. At the same time, Washington has been trying to use the Caspian as a route for transferring military equipment from Azerbaijan to Afghanistan via Kazakhstan and Uzbekistan.

Article 3 also contains a section on “Ensuring a stable balance of armaments of the Parties in the Caspian Sea.” The section is important in terms of the increasing efforts of the Caspian states to increase their military might in the area, which in past years had always raised the prospect of a “Caspian arms race.” Starting in 2012, Iran’s neighbors Turkmenistan and Azerbaijan considerably increased their military activities in the Caspian. As a result, the convention could also relieve Iran’s concerns over being dragged into a costly arms race with its neighbors.

Another issue of importance for Iran that has been addressed in the Aktau convention is the potential for the construction of the Trans-Caspian Pipeline (TCP). The envisioned pipeline would provide Turkmenistan with the ability to export natural gas to European markets via Azerbaijan, Georgia and Turkey. The idea of constructing a gas pipeline in the Caspian basin was first raised in 1999 and has been supported both by the United States and Europe. The main strategic aims of the project have been to reduce Russia’s dominance over energy transit routes while also depriving Iran of the potential for an alternative Turkmenistan–Iran-Turkey pipeline. As a result, both Tehran and Moscow have been strongly opposed to the TCP.

Article 14 of the Aktau convention formally allows the construction of “pipelines on the bed of the Caspian Sea,” conditioned that such projects “comply with environmental standards” including those embodied in the Framework Convention for the Protection of the Marine Environment of the Caspian Sea “and its relevant protocols.” The Protocol on Environmental Impact Assessment in a Transboundary Context is one of the “relevant protocols” that ban littoral states from getting involved in activities with impacts that may go beyond their own territorial waters, affecting other states as well as the general environmental situation of the Caspian Sea. As such, while Iran and Russia appear to have agreed to the construction of the TCP, they can still use environmental concerns as a pretext to block its realization.

All in all, by signing on to the Aktau convention, Iran has managed to gain a number of significant security guarantees while freezing the longstanding conflicts regarding the exact shares of the body of water and postponing decisions on such issues to an unspecified time in the future. At the same time, Iran’s cooperative stance could help it further develop relations with its northern neighbors. Indeed, the latter is of vital importance to the current situation, as Iran faces increasing efforts by the United States to limit the scope of its international interactions.