Despite rumors, Iran says it's not surrendering share of Caspian Sea

In response to reports that the government was giving up too much of its control of the Caspian Sea, a former Iranian deputy foreign minister explained the latest on talks over the sea with Iran, Azerbaijan, Kazakhstan, Turkmenistan and Russia. 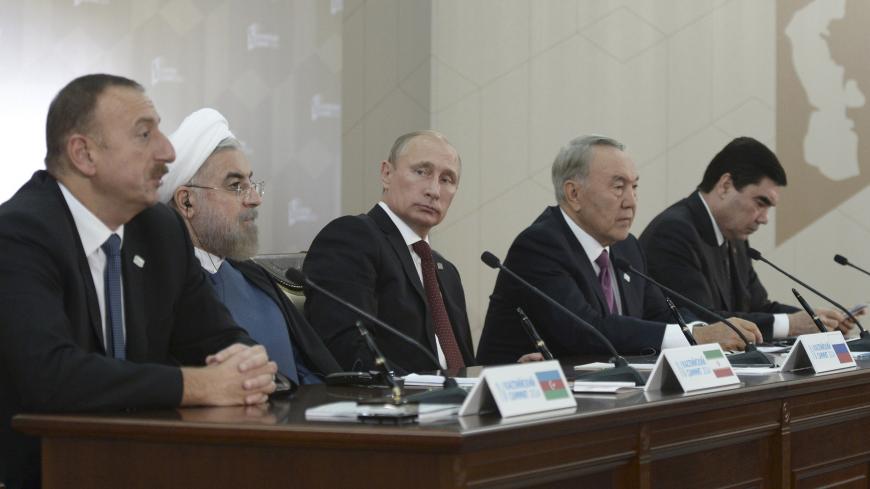 Following various reports surfacing on the internet over Iran conceding too much of its share of the Caspian Sea, a senior Iranian diplomat has denied it, saying the inland lake is not a “watermelon” that must be divided into five equal parts.

In an interview Dec. 12, former Deputy Foreign Minister for Asia-Pacific Affairs Ebrahim Rahimpour stated that Iran’s status regarding its share of the Caspian Sea is “good.”

Prior to the collapse of the Soviet Union, the Caspian Sea belonged only to Iran and Russia. But following the end of the Soviet Union, three new countries — Azerbaijan, Turkmenistan and Kazakhstan — joined the nations considering themselves shareholders of the Caspian Sea. Now the five countries are negotiating over their share of the world's largest inland body of water.

Rahimpour said that “50% of the sea in the northern part is divided between Russia and Kazakhstan, and this is not in our hands. In another part that is [related to] Iran, Turkmenistan, Azerbaijan … Iran has the least [amount of] coast.”

Referring to the Iranian public’s negative reaction to rumors of a 20% Iranian share, the diplomat continued, “A number [of people] are making harsh, contentious and negative [remarks] and are stating in a way as if the four other countries are determined to ignore Iran’s rights. But this is not true. That is why [we have been negotiating for] 25 years [over this issue]. We could solve the issue in six months, [but] it is clear that views aren’t similar.”

Rahimpour added, “We still haven’t reached an agreement with [the four other countries] and especially the two neighboring countries [Turkmenistan and Azerbaijan] over the division [of the Caspian Sea], and we still have disagreements and our views aren’t identical.”

However, he also spoke of the agreements that have reportedly almost been reached with the other Caspian Sea states. “We have 12 agreements in place, and we are in agreement to prepare a few of these 12 to be signed in the [upcoming] leaders’ summit in Astara. Our top officials have concerns and expectations that are correct.”

According to the senior diplomat, the leaders’ summit will be probably be held in the northern Iranian city of Astara toward the end of the coming spring.

He continued, “Our president has met with [the leaders of] all four countries. He has met about 10 times with two countries’ [leaders] and about five times with the other two [Caspian Sea] countries, and these relations are not comparable to those we have with Saudi Arabia, Bahrain and some other countries of the Persian Gulf.” Rahimpour added, “The dispute we have in the Persian Gulf and to the south [of the country] doesn’t exist in the Caspian Sea.”