President Donald Trump authorized on Monday the Pentagon’s 2019 budget, which will underwrite big upgrades for US weapons systems and troop numbers but leaves an uncertain future for the Pentagon’s operations in the Middle East. 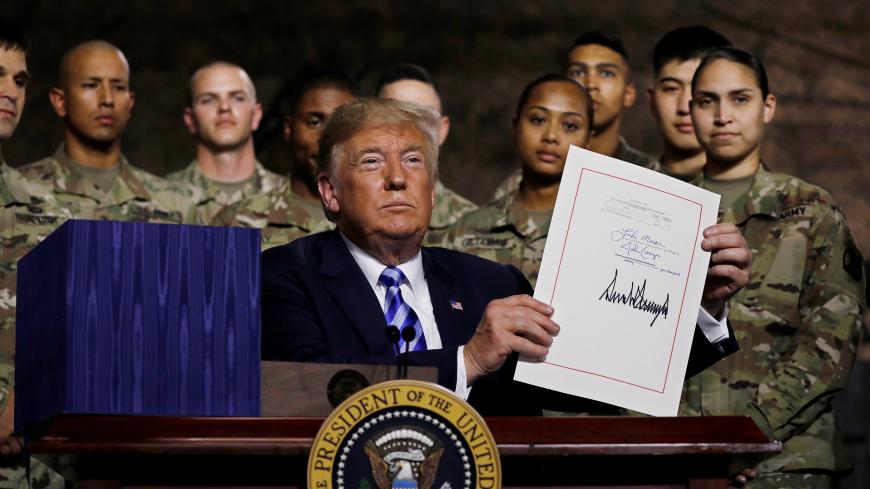 US President Donald Trump holds up the National Defense Authorization Act after signing it in front of soldiers from the US Army's 10th Mountain Division at Fort Drum, New York, US, Aug. 13, 2018. - REUTERS/Carlos Barria

US President Donald Trump signed the annual US defense authorization into law on Monday, a step toward shifting the Pentagon’s focus away from the decadeslong Middle East war on terrorism to great power conflicts against China and Russia.

As Trump put his signature on the $716 billion legislation, named after intraparty rival John McCain, that puts the United States on a long course to build a 355-ship Navy and significantly cuts the post-9/11 warfighting fund, the new law faces a bureaucratic fight within the Defense Department as the massive agency tries to determine how to rebalance its forces.

US troops, ships and air assets have begun rotating out of the Middle East in the past few months. In February, the Associated Press reported that contractors in Iraq had begun shifting out of the country, and most elements of the 10th Mountain Division left US staging areas for Afghanistan and other deployments in May. Less than 100 of those troops remain. Al-Monitor reported in July that the Pentagon will also shift explosive ordnance disposal units out of the country.

US Special Operations chief Gen. Tony Thomas told a West Point crowd in March, soon after the release of the bill, that the Tampa-based command started indexing “the living laboratory of consistent combat in Iraq, Syria, Yemen, Somalia, Libya” for post-9/11 lessons of the counterterrorism fight that can be applied against China and Russia.

“More disturbing to me is everything we’ve learned in the last 17 years, none of it is applicable to a major peer competitor fight,” Thomas said. “That as well is absolutely flawed.” Thomas, who commanded US and NATO special forces in Afghanistan in 2012 and 2013, also worried that the United States is about to “fumble” the counter-Islamic State (IS) campaign.

“This fight is difficult as hell, hard to manage, and not done yet, and we’re going to rue the day if we step away from it without completing our business,” the Army Ranger veteran said.

Yet larger, hard power assets, appear to be on the move out of the region as the Pentagon mulls its next moves in the Middle East. The last American aircraft carrier, the USS Harry Truman, left the Persian Gulf earlier this summer, even as Iran began annual naval exercises last week aimed at showing off its ability to close off the Strait of Hormuz, a critical oil thoroughfare. Experts say it’s the sign of a cultural shift inside the Pentagon.

While the Overseas Contingency Operations fund that’s surged more than $1.6 trillion into the Middle East counterterror fight will get a slight bump in the 2019 budget authorization signed by Trump on Monday, as the US military seeks to replenish precision-guided munitions used against the IS' urban strongholds in Iraq and Syria, the Pentagon aims to take $190 billion out of the fund over the next four budgets.

A former senior defense official recently told Al-Monitor that a panel of outside experts had pushed Defense Secretary Jim Mattis to prevent more drastic cuts to America’s military presence in the region, including the Overseas Contingency Operations warfighting fund. The New York Times has reported that Mattis and Joint Chiefs Chairman Gen. Joseph Dunford, the US military’s top-ranking officer, are seeking to move US special forces units out of Africa.

But US military presence in the region faces tricky law-based questions. The Pentagon’s Middle East operations, such as the IS campaign and the refueling of Saudi and Emirati jets, also hang on post-9/11 legal authorities focused on al-Qaeda that have faced increased scrutiny from lawmakers on Capitol Hill.

A proposal from Senate Foreign Relations Committee Chairman Bob Corker to concoct an expanded Authorization for Use of Military Force appeared to stall in committee after its introduction in April.

“Every time we try to adjust something, what are the two words you’re exposed to: mission creep,” said David Maxwell, a retired US special forces colonel. “They’re trying to thread the needle.”

Though the Army unveiled new Security Force Assistance Brigades earlier this year, in an effort to extend train-and-equip efforts that have been a mainstay of the counter-IS campaign beyond special forces into regular Army units, it’s not clear how much support the trial effort — set to eventually include six full units — has beyond Army Chief of Staff Gen. Mark Milley.

For “something that’s a threat to our national security, you can’t outsource it,” said Maxwell, the retired special forces colonel now with the Foundation for Defense of Democracies. “It can’t take the place of national security operations.”