The Pentagon’s command for elite special operations forces is assessing how repeated deployments to the Middle East during the war on terror have impacted the forces' core values. 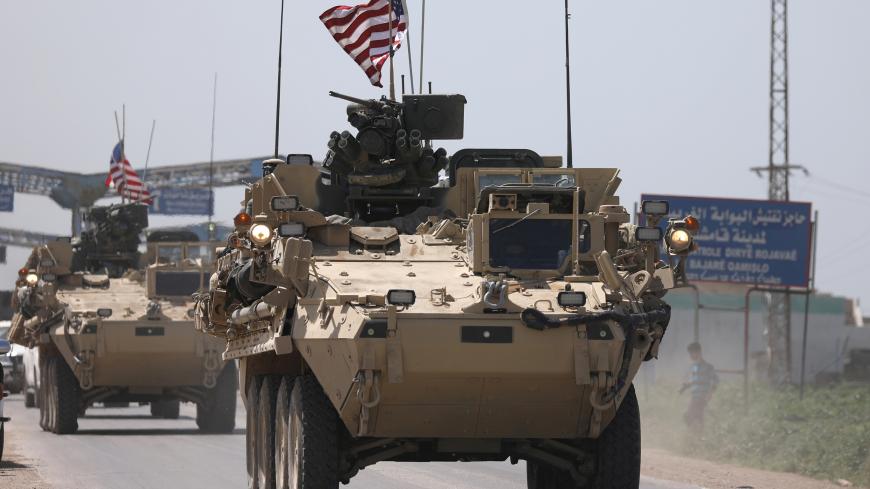 US military vehicles travel in the northeastern city of Qamishli, Syria, April 29, 2017. US special operations forces have been reported as having operated in Qamishli. - REUTERS/Rodi Said

The Pentagon’s command for elite special operations forces is examining how repeated deployments to the Middle East during the war on terror have impacted the forces' core values and how to preserve the lessons of the nearly 18-year fight after completing an initial review. The evaluation followed a spate of disciplinary incidents.

The US Special Operations Command “is undertaking an assessment of the cumulative effects of over seventeen years of continuous combat,” the elite command wrote to Congress in February. The command said the effort includes “increased support on organizational culture and values.”

The command’s ongoing study comes after Gen. Raymond "Tony" Thomas, who retired in the spring, initiated a 90-day review of “core values” in the command in his final months on the job in the wake of a spate of disciplinary infractions linked to special operations forces. Lt. Phil Chitty, a Special Operations Command spokesman, told Al-Monitor that the findings of the review will not be made public and that while the command is doing a number of ongoing assessments to assess the impacts of the war on terror, “there is not an overarching study.”

Lawmakers on Capitol Hill scrutinized two incidents in particular, when US Army Staff Sgt. Logan Melgar, a Green Beret, died at the hands of Navy SEALs in Mali in 2017 and when Eddie Gallagher, also a SEAL, was charged in the slaying of a wounded Islamic State prisoner of war. A Navy court-martial jury acquitted Gallagher of the murder charge earlier this month.

The Washington Times first reported earlier this year on Thomas’ disciplinary review, which looked at special operations forces instruction programs, surveys of the command climate and direct engagement between commanders and their subordinates.

The Special Operations Command’s self-reflection on the terror fight comes as the command and Congress try to preserve the lessons of nearly two decades of conflict in the Middle East as the Donald Trump administration pivots resources to potential future fights with Russia and China that emphasize high-tech and long-range precision weapons.

Thomas urged the Pentagon to keep one eye on the terror fight as the Islamic State migrates away from Iraq and Syria, and to apply the lessons of that conflict to a great-power war. The four-star general feared that the Pentagon was “about to fumble” the Islamic State threat, just as when the militant group took advantage of a vacuum of US troops to effect a takeover of large swaths of Iraq in 2014.

“More disturbing to me is everything we’ve learned in the last 17 years, none of it is applicable to a major peer competitor fight. That as well is absolutely flawed,” he said in a speech at West Point in 2018. “What we’re trying to do as the special operations proponent is identify everything we have done in the past 17 years, the living laboratory of consistent combat in Iraq, Syria, Yemen, Somalia, Libya, etc., we’re trying to identify those things that are absolutely a part of multi-domain battle and should be cross-walked, maybe scaled, maybe modified.”

In February 2018, US-backed forces killed a number of Russian mercenaries in an hourslong battle waged in Syria’s oil-rich northeastern province of Deir ez-Zor. The deadly fight, Thomas said, was a message to the Pentagon “not to throw the baby out with the bathwater” when it came to understanding the lessons of the terror fight.

But Thomas tested the patience of Defense Secretary Jim Mattis as Thomas pushed to explain the relevance of special operations to potential China and Russia fights, a former White House official told Al-Monitor on condition of anonymity.

The Special Operations Command is also known as SOCOM.

“I don’t think that Secretary Mattis was a huge fan of SOCOM or special operations in general,” said the former official. “It did compound issues with Thomas.” The long-serving Army Special Forces soldier struggled to get his message across with retired and active-duty Marines running the Pentagon such as Mattis and the chairman of the Joint Chiefs of Staff, Gen. Joseph Dunford, the former official added.

Still, Congress plans to compel the Pentagon to do self-reflection on the US-led fight against the Islamic State, according to the must-pass defense bill that cleared the Senate last month. Lawmakers inserted a provision calling on the Department of Defense to report on the military’s lessons learned from the battles in Raqqa and Mosul that will focus on fighting in dense urban terrain, and integrating special operations forces with conventional units and foreign forces.

Experts said Thomas, who stirred controversy for revealing that the CIA had scrapped training for Syrian opposition forces at a public forum in 2017, was trying to make the case that the Middle East was already being used as a battlefield for great powers.

“He’s trying to posit the fact that we just had a near-peer competition, and we didn’t have an enemy with Russian flags on their uniforms,” said Frank Sobchak, a retired Army Special Forces colonel. “There are going to be aspects where it’s in the gray zone. SOCOM was created for these kinds of fights.”