The release of a Turkish woman charged with smuggling in Israel marks an upturn in Turkey’s volatile relations with Israel, but analysts warn that the two countries' motivations for friendship — cynical business interests — can only do so much to keep the tension at bay. 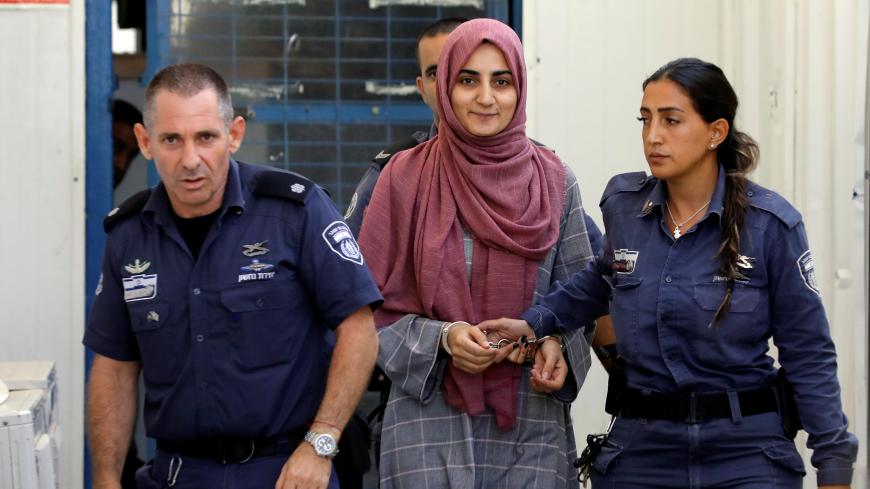 Turkish citizen Ebru Ozkan, who was arrested at an Israeli airport last month, is brought to an Israeli military court, near Migdal, Israel, July 8, 2018. - REUTERS/Nir Elias

Turkey’s erratic relations with Israel seemed to be on the upswing again amid news that Israeli authorities freed a Turkish woman charged with smuggling goods to a terrorist group and allowed her to return home on July 16.

Turkish presidential spokesman Ibrahim Kalin confirmed on Twitter that Ebru Ozkan was free and had been contacted by Turkish President Recep Tayyip Erdogan to convey his sympathy over her ordeal.

Ozkan was charged last week in an Israeli military court with passing money and a telephone charger to members of the militant group Hamas. She was also accused of smuggling five bottles of pricey perfume with the intent of selling them and passing the proceeds along to Hamas. She denied any wrongdoing. Ozkan may well have been the victim of sharper scrutiny afforded to Turkish citizens thought to be traveling to Israel under the guise of tourism with designs to further inflame tensions between Jews and Palestinians.

Yet even as Turkish Foreign Minister Mevlut Cavusoglu bemoaned Israel’s “pitiless persecutions” last week, saying relations would normalize only when “Israel stops its inhumane polices,” news emerged that Turkey had appointed a commercial attache to its embassy in Tel Aviv. Such apparent contradictions perfectly sum up the current state of Turkish-Israeli relations. Political tensions escalated anew in May, when Turkey recalled its ambassador and told Israel’s to leave over the United States’ decision to move its embassy to Jerusalem. Israel, in turn, showed the door to Turkey’s consul general in Jerusalem. Yet none of this conflict has stood in the way of flourishing trade.

It’s a win for both sides, for now. “Israel enjoys Turkey’s airspace while Turkish trucks enjoy free passage from Haifa to Jordan and to the Arab world,” explained Hay Eytan Cohen Yanarocak, a researcher at the Moshe Dayan Center in Tel Aviv, in an interview with Al-Monitor. Turkish airlines flew over a million passengers to Israel last year, making Istanbul the foremost hub for traffic between Israel and the rest of the world. Turkish contractors have built nearly half of the skyscrapers dotting Tel Aviv’s skyline, with Ankara-based Yilmazlar Holding leading the pack. “Moreover, Turkey wants to have direct access to Jerusalem to increase its influence in the city. Therefore, in the shadow of constant verbal attacks, I assume that bilateral relations will survive,” Yanarocak noted. Turkey’s deepening economic woes make it that much less likely it would forfeit business.

Louis Fishman, a professor at Brooklyn College who writes on Turkey and the Palestinian-Israeli conflict, concurred. He told Al-Monitor, “Turkey knows that pushing Israel too hard on the Palestinian issue threatens its strong economic ties with the Jewish state. This paradox forces Turkey to perform a domestic balancing act between pleasing its pro-Palestinian Islamist factions and keeping Turkish investments in Israel safe from sanctions.”

Erdogan's brother Mustafa, who worked as a fitter for many years for the late Israeli shipping magnate Sammy Ofer, "visited Israel many times for shipping, mainly," a well-informed Israeli source told Al-Monitor on strict condition of anonymity. The source declined to elaborate.

But profit apparently has its limits. Limak Holding, a Turkish contracting giant partnering in a joint venture with Maryland-based contractor Desbuild Incorporated, has refused to take part in the construction of the United States’ temporary embassy building in Jerusalem, Al-Monitor has learned. Limak’s boss, Nihat Ozdemir, is among a handful of contractors allegedly favored by Erdogan, and his company is globally known for building state-of-the-art airport terminals.

Desbuild director Prakash Hosadurga told Al-Monitor in an email, “We formed a JV [joint venture] with Limak about five years ago specifically for a project in Baghdad, which is about to be completed. Two years ago we, the JV, were awarded a five-year [indefinite delivery/indefinite quantity contract] for temporary construction projects from the US government.”

However, Hosadurga wrote, “Limak refused to take part in this task order at Jerusalem and Desbuild is pursuing the project on its own without the help of Limak.” Limak did not respond to Al-Monitor’s request for comment.

Gallia Lindenstrauss, a research fellow at the Institute for National Security Studies in Tel Aviv, argues that preserving business ties in the face of deepening political malaise may no longer be so easy. She told Al-Monitor, “Many of the things Turkey does with regard to the Palestinians seem from the Israeli perspective to [have] potentially damaging ramifications. This makes the exchanges between the respective government officials more difficult and has caused the rise in cases of Turkish citizens being arrested by Israeli authorities. I don’t see how this mistrust will go away soon.”

In the past, both countries relied on Washington’s mediation to fix relations, as when President Barack Obama convinced Israeli Prime Minister Benjamin Netanyahu in March 2013 to apologize to Erdogan over the deaths of nine Turkish citizens in the Mavi Marmara incident. But unlike the Obama administration, the current one "does not seem to be in any serious manner trying to ease tensions between Israel and Turkey,” Lindenstrauss observed.

This could change if David Satterfield, a highly respected career diplomat with close knowledge of Israel and the Arab world and who has been tapped as the new US ambassador to Ankara, is confirmed. Satterfield’s wife, Martha Ann Satterfield, is currently the deputy chief of mission in the US Embassy in Israel.