Federal documents reviewed by Al-Monitor show upgrades to the temporary facility in Arnona will cost far more than the president said. 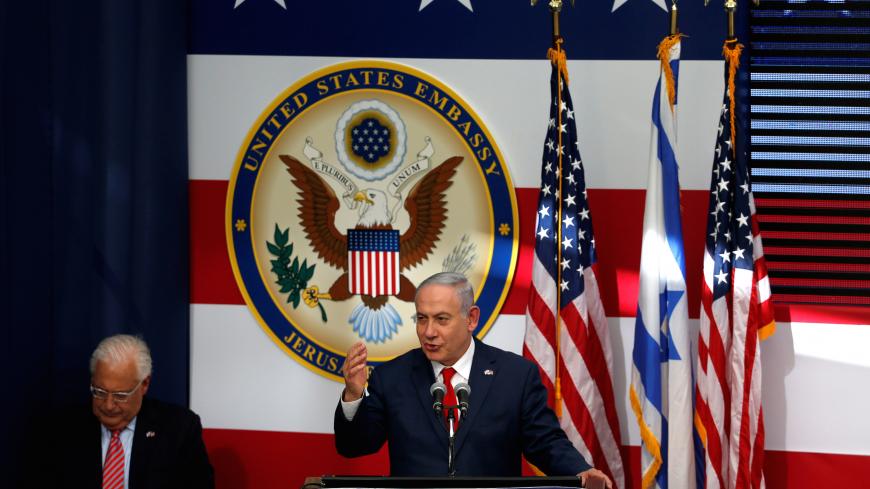 Israeli Prime Minister Benjamin Netanyahu speaks as US Ambassador to Israel David Friedman sits next to him during the dedication ceremony of the new US Embassy in Jerusalem, May 14, 2018. - REUTERS/Ronen Zvulun

How’s this for inflation?

President Donald Trump has repeatedly boasted that he would save US taxpayers a bundle by negotiating a $250,000 price tag for a new embassy in Jerusalem. Turns out the final cost, just for a temporary facility, is almost 100 times more.

Documents uploaded this week to the official database of federal spending show that Maryland-based joint venture Desbuild Limak D&K has been awarded a $21.2 million award to design and build “addition and compound security upgrades” to the embassy in Jerusalem’s Arnona neighborhood. That’s in addition to the $335,000 spent to get the facility, formerly a US consulate, ready for its ritzy grand opening as an embassy back in May.

“We’re going to have it built very quickly and inexpensively,” Trump told reporters at a March press event with Prime Minister Benjamin Netanyahu following his December decision to recognize Jerusalem as Israel’s capital and relocate the US Embassy from Tel Aviv. “They put an order in front of my desk last week for $1 billion. … We’re actually doing it for about $250,000, so check that out.”

The president added, “Now it’s temporary, but it’ll be very nice,” apparently conflating the potential bill for a final embassy with his estimate of how much it would cost to upgrade the consulate into an embassy. Even then the $250,000 was way off, as the $21.5 million also refers to upgrades to the temporary site in Arnona.

Trump has repeated versions of this claim multiple times, gradually raising the price tag up to $400,000, including during a bilateral press conference with German Chancellor Angela Merkel in April. The White House referred Al-Monitor to the State Department regarding the discrepancy.

“As the president stated, the cost of initial modifications made to permit the embassy to open on May 14 was approximately $400,000,” a State Department official told Al-Monitor. “Following the May 14 opening, we have moved on to planning for and construction of a new extension and security enhancements at the interim site.”

The $21.5 million total “is actually a lot for that considering that they have plans apparently to purchase a new facility,” a House aide told Al-Monitor. The aide noted that while the State Department briefed Congress on modifications to the Arnona embassy within the past six weeks, officials couldn’t provide a cost estimate or specify how long the construction would take.

The Israelis gifted land in Jerusalem for the United States to build a permanent embassy, the aide said, but the United States is unable to use it because of zoning issues. Patrick Kennedy, the undersecretary of state for management during the Barack Obama administration, said the permanent Jerusalem embassy is likely to be finished at well under $1 billion, the price tag for the new embassy in London that Trump has repeatedly derided as being in a “lousy” location.

“I can’t imagine it would [reach] half a billion,” Kennedy told Al-Monitor.

It remains unclear when the Trump administration intends to begin construction on a permanent embassy. According to the federal spending documents, the upgrades to the Arnona site were scheduled to start on Monday of this week and last until April 2020.

Further complicating matters, part of the building in Arnona straddles a 1949 armistice line dividing West Jerusalem and East Jerusalem, which the Palestinians claim as their capital for a future state.

“No Man’s Land is occupied territory,” Ashraf Khatib of the Palestine Liberation Organization’s Negotiations Affairs Department told The New York Times in March. “Any permanent status for that territory should be part of a final status negotiation.”