Armed with sweeping powers under Turkey’s new governance system, President Recep Tayyip Erdogan has quickly issued a slew of decrees that bring almost all state institutions under his control. 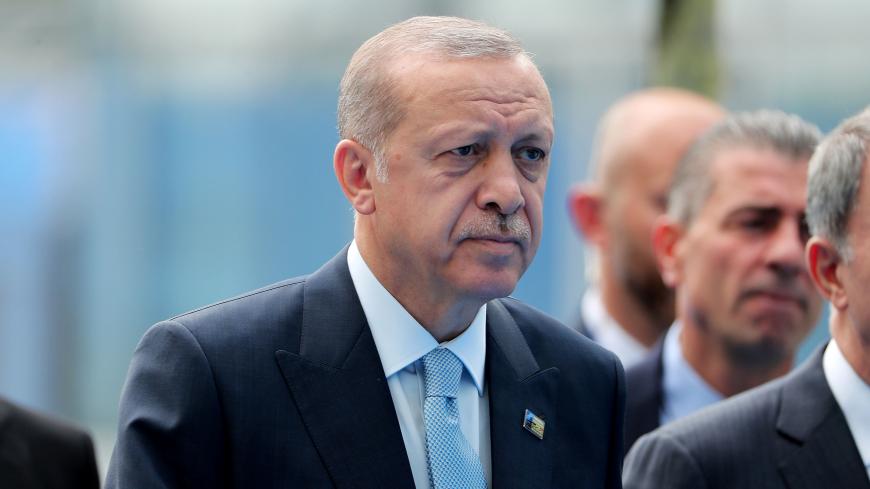 The swearing-in of President Recep Tayyip Erdogan on July 9 marked the end of Turkey’s parliamentary system and ushered the country into a new form of governance that accumulates power in the hands of the president.

The new presidential system — narrowly approved in a constitutional referendum last year — is a unique one that defies easy definition. Turks have been trying to divine how it will function from the slew of decrees that Erdogan began to issue as soon as he took office following his victory in the June 24 polls.

The first decree authorized the president to form the Cabinet. Previously, this authority belonged to the prime minister, a post that no longer exists. Later in the day, Erdogan announced his 16-member Cabinet and named a vice president.

In the old system, the government had to receive a vote of confidence from parliament to assume office and lawmakers could also initiate censure motions against the government and individual ministers. This parliamentary check mechanism has been abolished. The authority to appraise and remove ministers now rests exclusively with the president.

Abdullatif Sener, a former deputy prime minister who is now a lawmaker for the main opposition party after falling out with the president, told Al-Monitor, “Even if they drag the country into wars on all sides, even if hundreds of soldiers die every day, even if all hell breaks loose, no constitutional mechanism exists now to change the government.”

Budget-making is another key authority transferred from parliament to the president. “The president has obtained the power to spend 25% of the national income … as he likes,” Sener said.

The president is also entitled to legislative powers through his authority to issue decrees. “There is no democracy in the world where parliament shares its legislative authority. Be it a parliamentary system or a presidential one, the law-making power belongs unequivocally to parliament, but this system is like no other,” Sener said. “Don’t be misled by the term ‘decree’ — those decrees amount to laws. Parliament has lost its legislative prerogative.”

Is the president free to issue decrees on any subject? Sener said, “The decrees cannot be used to restrict basic rights and freedoms, but there is a trick here. Economic rights such as the rights to collective bargaining and strike were exempted.”

Well-known lawyer Omer Faruk Eminagaoglu suggested that Erdogan could use the legislative duality to foist unpopular economic measures on parliament. “The presidency will be in charge of all legislation, but bills about heavy economic and tax burdens that could spark popular discontent will be passed by parliament at the president’s demand,” he said in an interview with Al-Monitor.

If parliament and the president push different legislation on the same issue or if the president oversteps the scope of decrees, the matter will go to the Constitutional Court. Here, another problem emerges, as the president will be highly influential in shaping the composition of the court under the new system.

Eminagaoglu said, “Just as the legislative, the judiciary has been tied to the president. President Erdogan will appoint half of the Constitutional Court members as well as the members of the Higher Board of Judges and Prosecutors, which is the backbone of the judiciary. … To speak of an independent judiciary is no longer possible. If the president issues a very controversial decree tomorrow, Turkey has no mechanism to quash it.”

The presidency took over the authorities of the old Council of Ministers as well. The founding laws of all ministries were abolished with a single decree. Policies in various realms will be now drawn up at nine offices attached to the president, and the ministers will be left to implement them. From the National Intelligence Organization and the General Staff to the Directorate General of Press and Information and even state theaters, almost all public institutions are now attached to the presidency.

In sum, the new system brings all the state’s administration under the president’s control and disables the checks and balances. Broadly stated, the president will issue laws, draw up the country’s budget and the programs of all ministries, appoint the members of top courts, head the intelligence service and the military and even issue the press cards of journalists. The entire state system will be run from the presidential palace, with Erdogan wielding unbounded and unchecked power.

What does this mean for the future of Turkey?

According to Sener, “We’ve entered a very peculiar period, which I cannot define as a democracy. The regime has changed. It could [devolve further], depending on the initiative of those who have accumulated the power in their hands. We might speak of a dictatorship in Turkey in the future.”