Turkey's latest decree under a continued state of emergency grants the intelligence sector unprecedented influence in the military and government, while giving Erdogan full control in these areas. 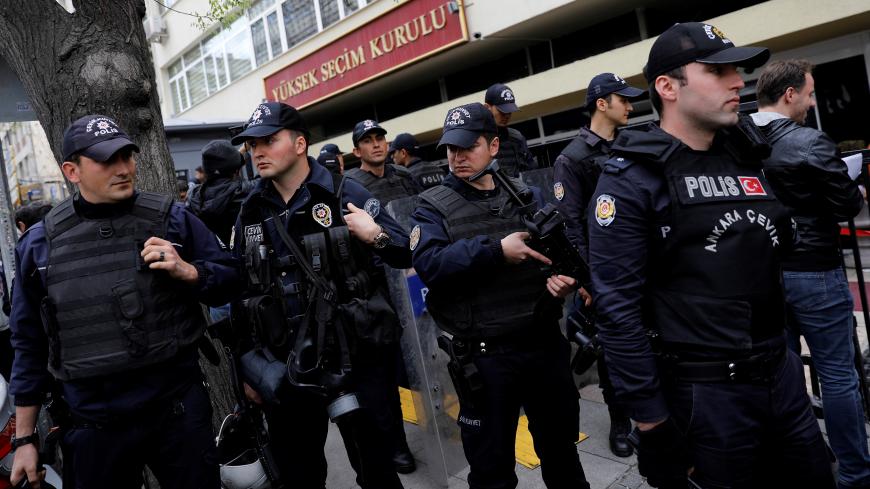 Turkish riot police secure the entrance of the Supreme Electoral Board as people wait in line to submit their personal appeals for annulment of the referendum on an executive presidency, Ankara, Turkey, April 18, 2017. - REUTERS/Umit Bektas

It is the 27th decree Turkey has implemented under a state of emergency since the failed coup attempt last year, but make no mistake, this one's a doozy. The expansive changes enacted are coming much faster than expected after the hotly contested voter referendum in April that authorized an executive presidency.

The decree, which took effect Aug. 25, carries significant adjustments in intelligence and security bureaucracies, allows thousands of police and judiciary personnel to be recruited and indicates other hefty changes — such as abolishing the Prime Ministry — could be on the way.

In the basic law regulating intelligence affairs and state civil servants, the words "prime minister" are replaced by "president," signaling that all the prime minister's powers in these critical areas have been transferred to the president.

There are several other critical changes introduced by Decree 694. The National Intelligence Organization (MIT), which until now was an undersecretariat attached to the Prime Ministry, is now attached to the presidency, giving that office absolute power over MIT’s entire gamut of administration and operations. The MIT chief can only be investigated and questioned with the permission of the president. The future of intelligence chief Hakan Fidan, who is frequently rumored to be on the verge of resigning, is now solely up to President Recep Tayyip Erdogan. Also from now on, the president will chair the National Intelligence Coordination Board, which used to be chaired by the intelligence chief.

Intelligence surveillance and investigations of personnel in the Ministry of Defense and the TSK were carried out by the MIT until 2011. The MIT was then not allowed to investigate anything to do with the TSK. That inevitably became the intelligence weakness that allowed Gulenists, who are blamed for the coup attempt, to penetrate TSK ranks. The MIT now has the unprecedented power to investigate any military person and unit at any time and can dismiss any of its staff with two weeks' notice. Before, dismissal was a nightmarish bureaucratic procedure that could take months for all the paperwork before a case even made it to the courts.

This is just the beginning of the transformation of the state to an executive presidency. Something that didn't escape notice was that Erdogan started with the MIT and expanded the powers of the agency to internal security. Turkey has thus entered an era when the intelligence sector will have extraordinary influence in state governance and internal and foreign politics.

Regarding military promotions, colonels and generals will be able to be promoted without fulfilling the previously required service duration at their current ranks. This arrangement could encourage competition between officers and make them work harder by linking promotions to merit, but it could also politicize promotions by allowing the ruling Justice and Development Party (AKP) to advance officers it favors over senior officers awaiting promotions.

Another interesting feature of Decree 694 is an exceptional method of trying to solve the desperate need for pilots by the Turkish air force. Some 200 pilots who have resigned from the air force and joined private air companies will now be receiving compulsory “return to military service” orders. Those who do not comply within 15 days will risk losing their flying licenses. Earlier attempts at attracting these pilots back to military service did not work well, so the issue was forced. When the retired military pilots return to duty, civilian airlines will make up the deficit by hiring foreign pilots.

With this comprehensive decree, the military judiciary system is being totally eliminated. Military judge and prosecutor classes have been abolished and the entire TSK legal process is to be handed over to civilian courts and prosecutors.

One potentially positive aspect of the decree concerns the undergraduate- and graduate-level military education system, which will now allow civilian methods to be used and will increase the number of civilian instructors instead of relying primarily on officers. But it is still not clear if the National Defense University system, which looks promising on paper, will work in reality.

Another novelty introduced is the possibility of extraditing or exchanging foreigners sentenced in Turkey with other countries upon the request of the foreign minister and approval of the president, who will have the final word. This will enable Turkey to use foreigners detained in Turkey for diplomatic bargaining.

Another important aspect of the decree is that it rearranges the General Security Directorate (national police) by allotting it 32,014 new posts.

Decree 694 is not a simple state of emergency legal diktat. Rather, it is the first major move toward an executive presidency — one that bypasses the parliament by introducing amendments to 12 existing laws without going through parliamentary approval.

This unexpected acceleration of radical changes in the state structure — which were not expected until after October — signals an important reality: Erdogan has exhausted his patience waiting for the transition to an executive presidency and wants to achieve without further delay the bureaucratic transformations that will be the pillars of his presidency.

The question that arises now is how successful Turkey will be in building new populist political institutions and transforming existing ones.