Turkey's purges since the failed coup are now targeting armed forces officers with advanced degrees from the United States, threatening to devastate the military's brain trust. 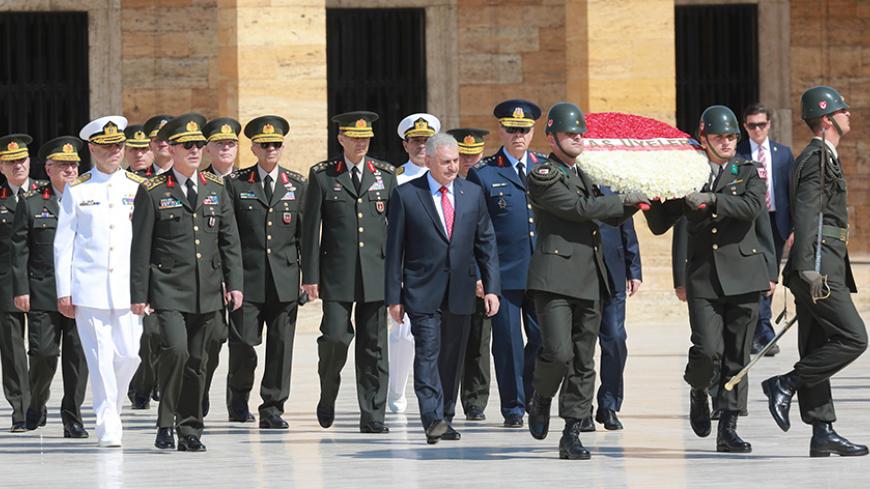 Perhaps a good education doesn't always pay off after all.

Three months after the July 15 failed coup, dismissals of military personnel and a flood of investigations about the Turkish Armed Forces (TSK) continue. And on Oct. 12, in the fifth wave of purges, 201 ranking officers from the Turkish air force and 32 from the navy were discharged.

A striking commonality in the latest wave of dismissals quickly attracted attention. In this group of mostly captains, majors and lieutenant colonels, the majority were highly qualified TSK officers assigned to critical transformation projects. Most had completed master’s degrees or doctoral studies in prestigious US military institutes such as the Naval Postgraduate School in Monterey, California, the Air Force Institute of Technology at Wright-Patterson Air Force Base near Dayton, Ohio, and top colleges such as Yale, Princeton and Stanford.

The Naval Postgraduate School, which I attended from 2008-11 for a master's degree in security studies, has been a target of Turkish media for a long time. Citing confessions of a Gulenist officer, Turkish media have reported that coup staff officers attended the same school, claiming the CIA and Pentagon established contacts with the coup plotters through the school. Although I never heard of a lecture or a workshop on "How to Stage a Coup" during the 18 months I attended the Naval Postgraduate School, many officers have told me that there has been a perceptible increase in the presence and influence of Gulenist-linked officers who went there.

Can Turkey then say that Gulenists' efforts to influence which officers were selected to receive a US academic education make these institutes and universities accomplices to the July 15 coup attempt?

An officer with a master’s degree from a US Ivy League school learned the bitter answer to that question upon being dismissed from the army after 15 years of service. The former officer spoke to Al-Monitor on condition of anonymity:

“I am not a Gulenist. I may even be a leftist. I was selected for that school after a tough selection process from among hundreds of officers. Our state paid thousands of dollars to the university for my education. Until July 15, I was an officer in critical transformation projects of the TSK. We all believed we would give our army an intellectual structure. But now we are labeled traitors."

The former officer, who was expelled from the TSK with a simple administrative decision by the Ministry of Defense, will never be a civil servant again and will have an extremely tough time finding employment in private or public universities.

“I am married. I have two children and very limited financial resources. What offended me the most was the reason for my expulsion. They say I was kicked out because after their investigation, they hadn't formed a strong opinion that I am not a Gulenist. What kind of reasoning is this? If I had anything to do with July 15, I would have been out there in the field. Now, because of a council I [know nothing about] that can’t form an opinion that I am not a Gulenist, they expel me from the army. Shouldn’t they find concrete evidence of my affiliation with Gulen and then discharge me? What kind of legality is this?” he added.

Another officer working toward his doctorate at an Ivy League school was called back to Turkey on Sept. 21 because he is the subject of an administrative investigation.

“Do you think I should return to Turkey? If I don’t, I will certainly be declared a traitor and expelled from the army. All my ties to Turkey will be severed. How do I prove from 15,000 miles away to that council of experts that I am not a Gulenist?” he asked in an email he sent to Al-Monitor.

The council mentioned by the sources is a new body set up in the General Staff headquarters. The council serves as an expert body that helps civilian prosecutors evaluate detained officers or those under suspicion. When the council is unable to reach agreement on whether an officer is a Gulenist affiliate, the officer in question will surely be detained and expelled from the TSK. The council's use of this bizarre reasoning, instead of coming up with solid evidence, is making life miserable and difficult for the young officers. So far, information has been tightly guarded about who serves on the experts council, how it works and what criteria it applies to inform the civilian prosecutors.

Those who have been academically trained in the United States but not yet detained or expelled have been appointed to posts far from critical headquarters in Ankara. Generals don’t want to risk being suspected of Gulenist affiliation by having such officers under their command.

Retired Col. Coskun Unal, who works in energy consulting in the District of Columbia, told Al-Monitor, “The first source they consult to identify the coup plotters in the TSK and to arrange for their cleansing is a paper issued by the ‘Peace at Home Council,' which is said to be the junta behind the coup. Those who were listed by that group, those who were promoted and allowed to continue with their duties [during the coup], were automatically assumed to be linked with the Gulen movement whether they took part in the coup attempt or not. They were all dismissed and detained.”

“The victims of this practice who suffer the most are the military attaches and officers in the TSK abroad. Today there are detention orders for about 40 military attaches." One Turkish air force pilot in the United States, Brig. Yavuz Celik, returned and was arrested, according to Unal. "Now others are hesitating and waiting,” he added.

Along with 40 attaches, about 300 officers assigned to NATO are being ordered to return to Turkey. These bright, foreign-language-speaking officers with academic backgrounds now have to decide whether to return or stay where they are and ask for asylum.

How will these purges affect the TSK's institutional structure? According to Unal, purging these personnel or distancing them from critical posts will inflict irreparable damage on TSK's knowledge assets.

Because of the efforts of Chief of General Staff Hulusi Akar, who himself has a doctorate from Turkey’s prestigious Bogazici University, over the past four to five years the number of TSK personnel with master’s degrees and doctorates had grown, contributing significantly to transforming the TSK into an intellectual army. But the promising trend suffered a major setback July 15.

The purges, which have mutated to academic witch hunts, are squandering the Turkish army’s already-limited intellectual capital. If these hunts continue, the TSK might not be able to recover.