Is Riyadh really pushing for control of Jerusalem holy sites?

Saudi Arabia is boosting its efforts to take over Jordan's administration of Jerusalem's holy sites, and many think the pressure is coming from Saudi efforts to drum up support for the US peace plan for the Mideast. 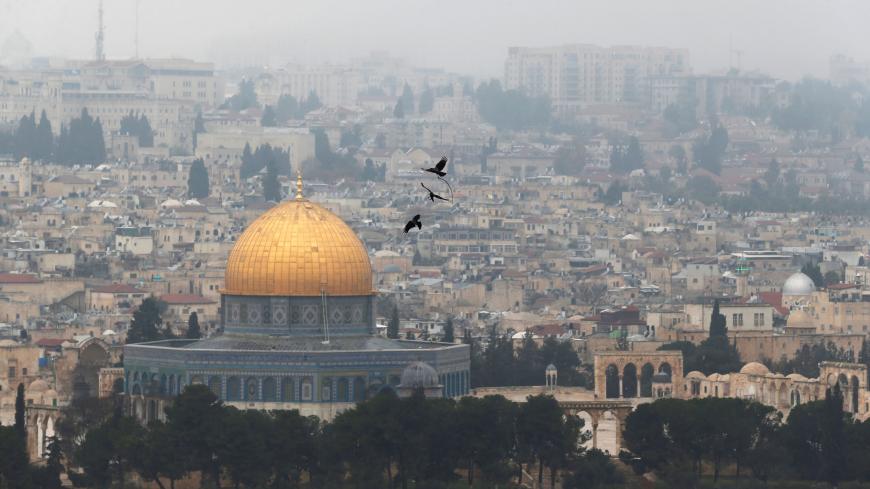 Birds fly on a foggy day near the Dome of the Rock, located in Jerusalem's Old City on the compound known to Muslims as the Noble Sanctuary and to Jews as the Temple Mount, Jerusalem, Jan. 2, 2018. - REUTERS/Ammar Awad

GAZA CITY, Gaza Strip — Saudi Arabia is currently investing a great deal of behind-the-scenes effort into taking away from Jordan its guardianship of the holy sites of Jerusalem, a senior official in the Palestinian Authority (PA) told Al-Monitor on condition of anonymity. The pressure seems linked to the Saudis' friendly relations with the United States, and with President Donald Trump's desire to win Arab support for his Middle East peace plan, which Jordan has not backed.

This revelation aligns with a June 22 report from Israeli newspaper Haaretz that the Jordanian monarchy is worried about Saudi Arabia's intent to deprive Jordan of its guardianship. Several peace agreements signed with Israel, such as the Jordan-Israel peace treaty of 1994, guaranteed Jordan's guardianship. In March 2013, PA President Mahmoud Abbas and Jordanian King Abdullah II signed the Convention on the Defense of Jerusalem and the Holy Sites with the aim of entrenching Jordanian guardianship over these sites.

Jordanian guardianship means Jordan’s administrative and security supervision of these places. Al-Aqsa Mosque Directorate, affiliated with the Jordanian Ministry of Awqaf, or charitable endowments, supervises 1,000 employees whose work is related to the management and guardianship of the 144-dunam (36-acre) Al-Aqsa Mosque complex.

“Saudi Arabia is now setting the stage for its guardianship of these sites," the senior PA official said, "and it is working on strengthening its relations with the Palestinian community in Jerusalem. It's also trying to lead religious figures and public opinion leaders from Jerusalem to visit Saudi Arabia and meet with Crown Prince Mohammed bin Salman to discuss the idea and try to garner Jerusalemite support for it."

He said that recently, Saudi officials contacted influential PA figures and expressed their desire to have Saudi clerics and media figures visit Jerusalem to strengthen relations with the residents there. While the source refused to name those officials, he said the Saudis have yet to explain the goal behind building such relations.

Talal Awkal, a political analyst and writer for Palestinian daily Al-Ayyam, told Al-Monitor, “Saudi Arabia’s sudden interest in the holy sites of Jerusalem aims at pressuring Jordan into changing its opposing stance" on the US peace proposal. The deal, he said, would remove discussions about Jerusalem from peace negotiations between the Palestinians and Israel. Washington recognizes Jerusalem as Israel's capital, which angers Palestinians.

Awkal said Trump is heavily counting on Saudi Arabia to play a pivotal role in gaining acceptance of the US peace plan in the Mideast. Saudi Arabia, he added, is deemed a key partner of the US administration, and it represents much of the Arab and Islamic worlds, though, on this topic, not Palestinians. About three-fourths of Jordan's population is Palestinian.

Wasel Abu Yousef, another Executive Committee member, refused to confirm or deny to Al-Monitor whether Saudi Arabia is trying to take over the holy sites' guardianship.

In January, the Arabi21 website quoted a Jordanian source as saying Jordanian authorities were discussing behind closed doors the Saudi steps regarding Jerusalem and were worried about their guardianship.

Raed Daana, one of the most important religious authorities in Jerusalem and former director of preaching and guidance at Al-Aqsa Mosque Directorate, told Al-Monitor that Saudi efforts to take over the sites' administration are “serious and real.” He pointed out that such efforts emerged following Trump's visit to Saudi Arabia in May 2017.

On Dec. 19, the London-based Al-Quds Al-Arabi newspaper revealed that there were behind-the-scenes differences between the Jordanian and Saudi delegations during the Arab Inter-Parliamentary Union, which took place Dec. 17 in Morocco. Saudi Arabia rejected Jordan's assertion of its guardianship of Jerusalem’s holy sites, the paper said.

Although decision-makers in Saudi Arabia did not publicly announce their desire to manage the holy sites in Jerusalem, several Saudi media circles have called for such a scenario. Abdul Hamid al-Hakim, a Saudi media figure close to the Saudi ruling family, called during the BBC’s "Talking Point" program May 16 for the holy sites in Jerusalem to be under Saudi administration.

Hassan Khater, director of the International Jerusalem Center, told Al-Monitor, “The Saudi donation … is aimed at getting closer to the Jerusalem community in order to prompt them to accept the Saudi guardianship over the holy sites in Jerusalem. However, the Jerusalemite community believes there is a link between the Saudi-US rapprochement, which coincided with the [US peace plan] and the [proposed] imposition of Saudi guardianship [over these sites].”

He said, “There are concerns over Saudi Arabia’s application of pro-Israel US ideas to end the conflict over the holy sites in Jerusalem, such as the partition of Al-Aqsa Mosque. Such ideas might be part of the [US peace plan], which is yet to be revealed and which is rejected by the Palestinians, being the fruit of an American administration that recognizes Jerusalem as the capital of Israel. Meanwhile, there have been statements whereby Saudi Arabia showed affinity for Israel.”

For instance, in a lengthy April 2 interview with The Atlantic, the crown prince said he recognized the right of the Jewish people to have a nation-state of their own next to a Palestinian state — a first for an Arab leader.

For Awkal, serious obstacles lie ahead of Saudi efforts to gain guardianship over Jerusalem’s holy sites. Chief among these is the absence of a geographical link between Saudi Arabia and Jerusalem. Such a move, according to Awkal, would require the support of Jerusalem’s religious figures as well as that of the Arab world’s heads of states — and Saudi Arabia still has a long way to go.