How Israel and Egypt are coordinating on Gaza

By threatening to close the Gaza Rafah crossing point, Egypt signals to Hamas that it must reconcile with Fatah. 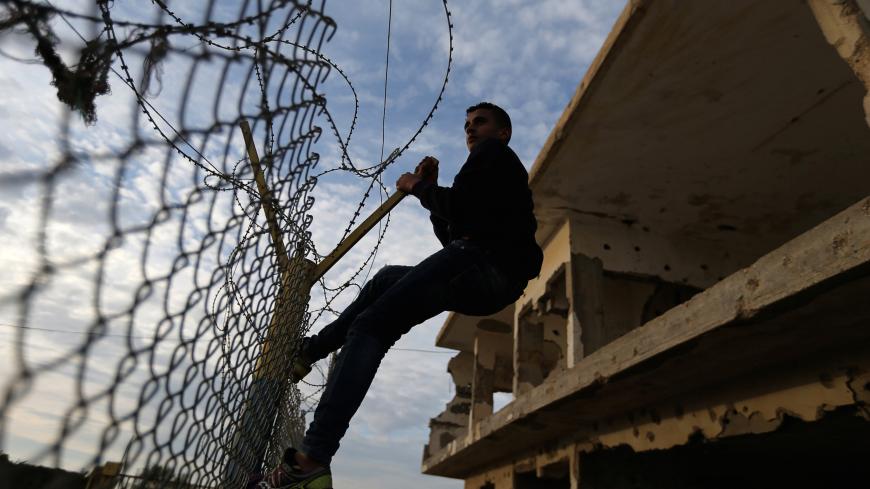 A Palestinian waits for his relatives to return into Gaza after the Egyptian Authority opened the Rafah Border Crossing for one day, in the southern Gaza Strip, Feb. 19, 2018. - REUTERS/Ibraheem Abu Mustafa

The Hamas delegation that visited Cairo on July 11 — led by the deputy head of the organization’s political wing, Saleh al-Arouri — faces a difficult decision. Unless it can prove its sincere willingness to advance the reconciliation process with the Fatah movement, Egypt will shut down the Rafah crossing — Gaza’s only passage to the outside world apart from the crossings into Israel.

Egyptian President Abdel Fattah al-Sisi has tasked the head of the country’s intelligence services, Maj. Gen. Abbas Kamel, with seeing through the endless saga between the two sides. On July 4, PLO Executive Committee member Azzam al-Ahmad told Kamel that Palestinian President Mahmoud Abbas was adamant about getting control of Gaza’s security forces as part of the reconciliation. However, the 83-year-old Palestinian leader had also concluded that he would have to achieve reconciliation with Hamas in order to wrap up his term with dignity and retire, according to Ahmed.

“Egypt is determined to pressure Hamas so that it understands the situation it’s in. Gen. Kamel knows exactly how to make that very clear,” a source in Gaza told Al-Monitor on condition of anonymity. The source, an associate of former Fatah leader Mohammed Dahlan, says Dahlan is working behind the scenes and the Egyptians see him as a key figure and consult him constantly.

The first goal is to ease Gaza’s deep humanitarian crisis while simultaneously severing links between Islamist forces in the Sinai Peninsula and the Gaza Strip.

The second goal is advancing the retaking of Gaza rule by the Palestinian Authority (PA). Egypt knows that if US President Donald Trump manages to raise a billion dollars from the Gulf states to rehabilitate Gaza and develop economic projects, the PA will have to be restored to power in the Strip. Without that, no reconstruction of the Strip will be possible. Obviously, little money will be disbursed if Hamas remains the sole power in Gaza as it has been for the past 11 years.

The third goal, no less important, has to do with inter-Arab tensions. Egypt views the ongoing Qatari involvement in the Strip as a disruption and threat, not only because Egypt still boasts of being the leader of the Muslim Sunni world, but also because it views the small, wealthy emirate that controls the Arab world’s most important media outlet, Al Jazeera, as a divisive force.

Egypt also resents the fact that Qatari envoy Mohammed al-Amadi is operating in Gaza at the behest of the emir to reconcile the rival groups, Hamas and Fatah, and mediate between Hamas and Israel. “When the Egyptians were convinced that the Hamas leadership was giving [Amadi] too much leeway, they shut down the Rafah crossing for three days,” said the Gaza source. The closure was meant to signal the Hamas leadership that the keys to the Gaza Strip are still in Cairo, he added. Egypt uses the border crossing as a pressure point on Hamas, just as Israel does with its border crossings into Gaza.

On July 9, Prime Minister Benjamin Netanyahu announced that he had ordered the closing of the Kerem Shalom crossing, through which merchandise is trucked into Gaza. Netanyahu said that the decision was made in response to the continued arson kites that have laid waste to thousands of acres of Israeli fields. Only essential humanitarian relief, food, fuel and medical supplies are allowed to enter Gaza. The supply of raw material, mostly for construction, and goods considered “luxuries,” such as clothing, sweets, etc., has been stopped. The new strictures went into force the day the Hamas team reached Cairo, and the timing of the Kerem Shalom closing was a stark reminder that absent “painful compromises,” Egypt would also shut down its crossing that has been open since the start of the month of Ramadan in mid-May for the passage of people and goods.

“There is close coordination between Egypt and Israel,” says the Gaza source, who believes the coordination also includes a division of responsibility. Israel, he says, wants to rid itself as much as possible of Gaza’s dependence and hopes to be a “second tier” supplier to Gaza after Egypt in supplying the needs of the Strip’s 2 million residents.

On the other hand, Egypt understands that the Rafah crossing increases Gaza’s dependence but sees this as an advantage. Gaza’s growing dependence provides it with an effective weapon against Hamas. Egypt can open its border for the supply of goods and raw materials that Israel consistently bans, and close it if Hamas does not behave as Egypt expects. Pure and simple.

These are the new rules that Egypt is dictating, and Hamas probably does not have much choice. The Rafah crossing has been open for almost two months now and the Hamas leadership has clearly felt the difference. Netanyahu’s closure of Kerem Shalom was greeted with virtual indifference on Gaza’s streets given that the Strip now has a supply alternative, albeit it a conditional one.

Egypt has pledged a series of measures beneficial to Gaza in addition to the Rafah passage if Hamas displays flexibility and reaches understandings with Abbas about resolving the conflict. These include establishing an industrial zone in northern Sinai that would provide jobs for Gazans, increasing power supplies to the enclave, building a fuel pipeline for regular supply to Gaza and more. In other words, Egypt is assuming greater responsibility for Gaza and giving Israel a unique, one-off opportunity to extricate itself from the Gordian knot with the Strip that it could not undo even when it withdrew all its troops and settlements from there in 2005 — and even after Hamas expelled the PA and took over the local government in 2007.

But Hamas is not the only player in the field. Abbas has refused to move forward with the reconciliation as long as Hamas insists on retaining control of all of the Gaza Strip’s security forces and rejects his demand to disarm its military wing known as the Izz ad-Din al-Qassam Brigades.

Will he be willing to compromise now?

According to the Gaza source, the answer is clearly affirmative. Senior PA officials believe that progress in reconciliation moves and a return of the PA to power in Gaza would offer an alternative to the Trump plan for Israeli-Palestinian peace, which the PA has rejected as biased in Israel’s favor even before it has been unveiled.

Hundreds of millions of dollars for Gaza’s reconstruction will be funneled through the PA coffers, and Abbas will get a significant role in the rehabilitation process. This is the only way he will be able to step down with dignity.